Asian countries on Thursday marked the 15th anniversary of the Boxing Day earthquake and tsunami that left more than 230,000 people dead.

Ceremonies took place in the Indonesian province of Aceh, where on December 26, 2004, entire villages were flattened and more than 125,000 people perished in a series of giant waves.

In the city of Banda Aceh, thousands of people attended a commemoration event at the tsunami memorial museum; relatives of the dead and religious and community leaders presented flowers at mass graves.

"No words can describe our feelings when we tearfully saw thousands of corpses lying on this ground 15 years ago," acting Aceh Governor Nova Iriansyah said at another ceremony in Sigli, a town in Pidie district.

"And now, we can see how people in Aceh were able to overcome suffering and rise again, thanks to assistance from all Indonesians and from people all over the world.''

Local media reported that fishers in Bireuen held a prayer ceremony on the beach and agreed not to venture onto the seas in their boats on Thursday as a mark of respect.

Events were also held for those left orphaned by the disaster when a 9.1 magnitude quake off the northern Sumatra island triggered huge tidal waves as high as 30 meters (100 feet).

Indonesia, which was the hardest hit, likely suffered a much higher death toll as many bodies were not recovered or identified.

In Thailand, where more than 5,300 people were killed, including tourists visiting resort islands in the Andaman Sea, officials held memorials at several locations, including at the Tsunami Memorial Wall in Phuket and Phang Nga province.

A special tribute was made to Thai King Maha Vajiralongkorn's nephew, Bhumi Jensen, who was last seen jet-skiing off the coast when the tsunami hit.

On Thursday evening, candlelit vigils were due to be held on several Thai beaches, attended by locals and holidaymakers. 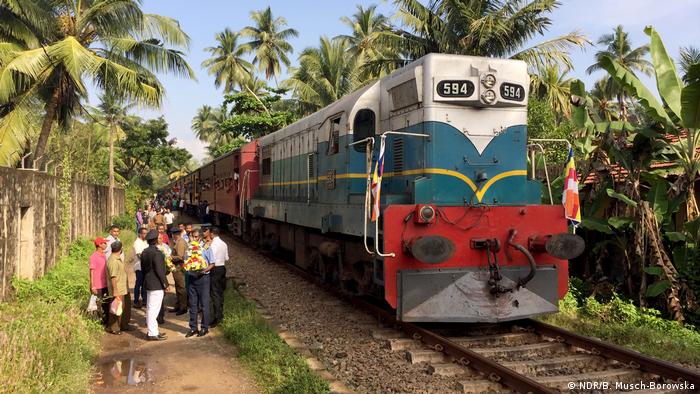 An express train from Colombo to Galle stopped at exactly the point where, in 2004, the tsunami drowned some 1,500 onboard another train

In India, where more than 10,000 people died, survivors were also to hold memorial ceremonies.

Sri Lanka, too, held several events, including at its own monument to the dead between Colombo and the southern city of Galle, while all government ministries observed two minutes of silence for the victims, who included 35,000 people from the Indian Ocean island nation.

Read more: Why is Sri Lanka reinstating the death penalty?

The 2004 earthquake and tsunami unleashed the energy equivalent to 23,000 times that of the atomic bomb dropped on Hiroshima and reached as far as East Africa.

Since then, Indonesia continues to be rocked by earthquakes, including one last year that triggered a tsunami that hit Palu on Sulawesi island and killed 2,200 people and left thousands more missing and presumed dead.

Read more: The last mile — What failed in the Sulawesi tsunami disaster

Hundreds more died last year after powerful earthquakes on the island of Lombok.

In December 2018, another tsunami, this time caused by a volcanic eruption, struck between Java and Sumatra islands. Hundreds lost their lives, and more than 14,000 were reported injured.

The volcano-dotted archipelago is one of the most disaster-prone nations in the world due to its position straddling the so-called Pacific Ring of Fire, where tectonic plates collide.

Indonesia: At least 25 dead after bus plunges into ravine

Thirteen people have also been injured, according to local police. The accident occurred shortly before midnight local time in South Sumatra province. (24.12.2019)

A new study by archaeologists working on the Sulawesi cave painting say it is also the world's oldest example of storytelling. The painting reveals an artistically advanced society with its own folklore and spirituality. (12.12.2019)

The world's largest palm oil producer has called the EU "discriminatory" over its plan to phase out biofuels. Europe is concerned about the environmental destruction and human rights violations practiced by the industry. (16.12.2019)