Thousands of people have taken to the streets in Bangkok to protest against the banning of a prominent opposition party that has challenged the government of former military ruler Prayuth Chan-ocha. 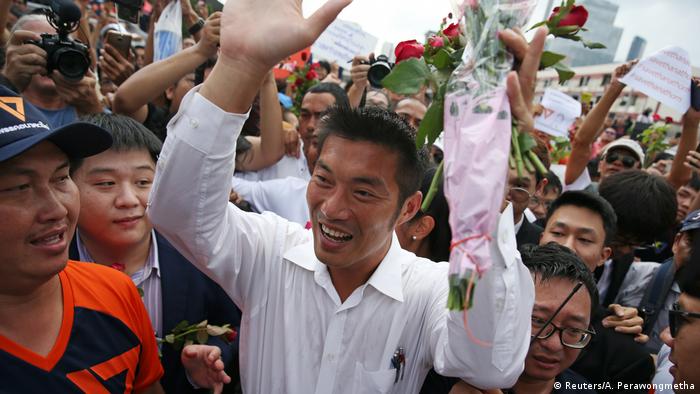 The latest protests in Bangkok were dubbed the largest demonstrations in the capital since a military coup in 2014.

The rally was called by Thanathorn Juangroongruangkit, the leader of the Future Forward party, who has rallied opposition against the government of former military ruler Prayuth Chan-ocha.

Last month, the court disqualified Thanathorn as a member of parliament on charges that he held shares in a media company on the date his candidacy was registered for the March election.

In the past few months, Thanathorn has emerged as the most outspoken opponent of Prayuth's government. The opposition claimed the polls were manipulated to favor the army-backed parties.

"This is just the beginning," Thanathorn told protesters in Bangkok's main shopping and business center.

"Today is a show of strength so that, in future, others may join us. We're just here today as a test run. Prayuth, don't be afraid yet. The real thing is next month," he added, as the demonstrators chanted "Long live democracy, dictatorship get out."

Thanathorn has signed a deal with six parties in an opposition alliance against the constitutional changes that were pushed by the military junta before the election.

Among the parties supporting the Bangkok rallies was Pheu Thai, which won the most seats in the 500-member House of Representatives lower house in the March election.

Palang Pracharat, the pro-military party formed last year by members of the junta's cabinet, told reporters on Friday it was inappropriate to organize a demonstration towards the end of the year.

Parties that back the military won the popular vote in March by a narrow margin. However, anti-junta parties, including those linked to ousted former Prime Minister Thaksin Shinawatra, also claimed victory in the election.

Although Pheu Thai — originally founded by Thaksin — secured a majority in the in the lower house of parliament, it could not form a government as it required the backing of the 250 military-loyal senators. The prime minister is elected by the House of Representatives and the Senate, which is entirely appointed by the ruling junta.

Experts say that military generals are pulling too many stings, controlling the election commission and influencing court decisions.

The March general election was dogged by claims of irregularities in ballot counting as well as allegations of vote buying. Critics also accused the electoral system, which was revised by the military junta, of favoring pro-military parties. They claimed it was rigged to prevent Pheu Thai from returning to power.