Thai opposition leader Thanathorn defiant after losing out in PM vote | Asia| An in-depth look at news from across the continent | DW | 11.06.2019

In a DW interview, Thai opposition leader Thanathorn says he still hopes to become prime minister in the future despite legal cases that threaten to derail his efforts. Charlotte Chelsom-Pill reports from Bangkok.

Thai opposition leader Thanathorn Juangroongruangkit has revealed he hasn't given up on becoming prime minister, despite losing out in a vote in parliament last week. Thanathorn was defeated in a head-to-head battle for the premiership against the military-backed incumbent and leader of the 2014 military coup, Prayuth Chan-ocha.

The charismatic young billionaire Thanathorn was chosen to represent the anti-military coalition, the Democratic Front, after his progressive Future Forward Party (FFP) came in third in March's vote. Formed just a year earlier, the party has shaken up Thailand's long-polarized political landscape.

'I have to do it myself'

Speaking exclusively to DW, Thanathorn said despite the setback, his ambition to one day become prime minister remains. "It's still solid. I don't want to be a hero. I want to spend more time with my family. I just want to go back to normal life," he said. "But since nobody [is] leading the charge, nobody [is] leading this project, the project to restore democracy back to this country, I have to do it myself."

Thanathorn was suspended as an MP last month for allegedly violating election law. He is facing a raft of legal challenges which could see him banned from politics, or even jailed. "There is the possibility that my days in politics will be numbered," he told DW. Still, he said, he remains undaunted. "You've got to understand that if you are afraid, you don't do anything ... The legal threat, the threat using legal charges, the threat of violence against some of the leaders of the party — these things are real. But we are unafraid. We are unsubmissive (sic) at this point in time."

The military has 'no intention at all' of letting go

Thanathorn has said the legal allegations against him are politically motivated. He has also repeatedly challenged March's election, describing it as "far from free and fair."

An Election Commission formula for calculating the seat allocation, revealed weeks after the election, saw his party lose several MPs.

A change in Thailand's constitution also saw the 250-member senate, handpicked by the military junta, take part in last week's vote for prime minister, fueling allegations the process was weighted in the military's favor. 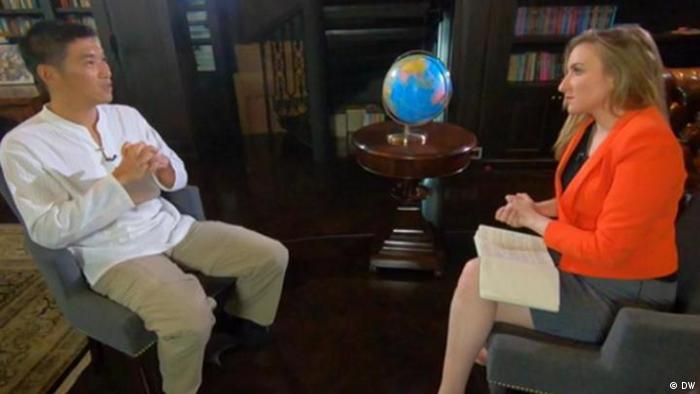 Voters speak out on social media

Opposition voters expressed their frustration over the military's continuing influence in politics the morning after the vote with the hashtags #RIPTHAILAND and #NotMyPM trending on Twitter.

The FFP leader said he is confident anti-military sentiment among his young, progressive voter base is not going to fade anytime soon.

"I believe that they [the military-backed government] cannot resist the wind of change forever. Walk on the streets and you will be hearing people voicing their opposition against the government.

"The anger of the people is tangible, is real. So I believe the restoration of democracy is inevitable. It's not a question of if, but it's a question of when."

He promised to "promote a peaceful environment for a unified society" on Tuesday as he was officially declared prime minister, after newly crowned King Maha Vajiralongkorn endorsed parliament's vote.

His governing coalition is composed of nineteen different parties, prompting speculation it could prove fractious and unstable over the coming months.