India: How are Netflix and other streaming platforms transforming Bollywood? | Asia | An in-depth look at news from across the continent | DW | 02.02.2022

India: How are Netflix and other streaming platforms transforming Bollywood? 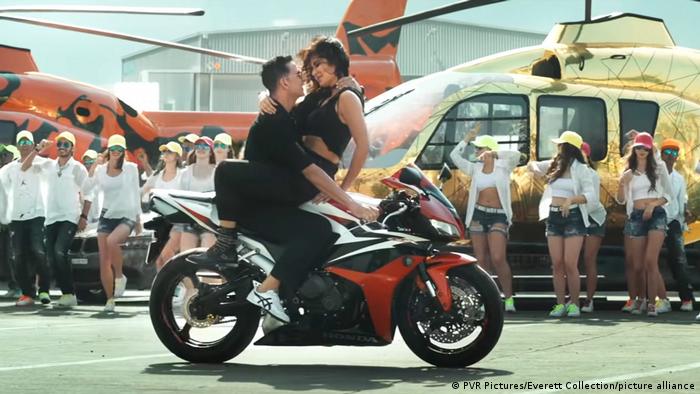 Does the big screen have a magic that streaming services can't match?

During the last two years of the COVID-19 pandemic, over-the-top (OTT) media streaming channels like Netflix, Amazon Prime Video and  Disney+ Hotstar have seen considerable growth in India and are reshaping the way Bollywood does business.

The pandemic dealt a heavy blow to the Indian movie industry — the world's largest in terms of the number of films produced.

Several films got stuck in various stages of production, and producers struggled to obtain revenues. That was until online streaming platforms took hold, offering an alternative to movie halls shut down due to COVID-19.

"OTT has come as a boon for Bollywood producers because their funds were locked for such a long time. They could just sell their films to streaming platforms and set the cycle rolling," film critic Himesh Mankad told DW.

"If it was not for OTT, we as an industry would have made a lot of losses as the theaters were not functioning and the burden of interest had piled up on films," he said.

"In fact, more important than theater releases, they have impacted the Bollywood business in a major way," Banerjee told DW, adding that the platforms have opened up another important avenue for monetization of content.

Tapping into a new global market

The biggest change OTT platforms have brought to India is providing viewers with access to content from all over the world, says film exhibitor Akshaye Rathi.

"We are witnessing some phenomenal content from Israel, Spain, Korea and various parts of the world. That gives exposure to the audience and changes the kind of expectations that they have for their entertainment," Rathi told DW.

The plethora of content now available for Indian audiences has also made the market more competitive.

"The benchmark in the minds of the audience is content that they have watched from across the globe. That has pushed Indian filmmakers, writers and actors to pull up their socks and upgrade the quality of entertainment," Rathi said.

According to Banerjee, OTT also allows for a broader domestic viewership in a linguistically diverse country such as India.

"With the language options enabled, we as Bollywood people are also able to access regional cinema, content which never had that much exposure before. So on the content part OTT gives us a broad spectrum to play with," she said.

Streaming platforms have also offered new opportunities for Bollywood filmmakers, actors and writers. Themes that couldn't be explored on the big screen have found takers with OTT.

"OTT platforms have opened you up to all kinds of genres and we as writers and producers are free to tell our stories," she said.

"Themes that were constantly written off by big producers, saying that they won't work in films, like social stigma films or political thrillers were always kept on the backburners before. Now if one film producer will not take it then there are five other OTT platforms to take it," she added.

Mankad says filmmakers will "always have the backing of OTT, because OTT players are risk takers."

According to Mankad, OTT has also changed the meaning of stardom in India. Some Bollywood actors who didn't make the cut on the big screen are now becoming OTT stars and building their own brand. A-list Bollywood actors on the other hand are increasingly starting to explore OTT to tap into a new market and reach a global audience.

The "battle" between Bollywood and OTT platforms is only going to get bigger, says Banerjee.

"It (OTT) has already transformed the Bollywood industry. Many blockbuster movies have found their releases on OTT in the past two years," she said.

"Even the big film producers are into OTT production now, they are looking at digital films instead of big budget theatrical dramas."

But for Rathi, the impact of streaming platforms will mostly be limited to satellite channels on television.

"I don't see it as competition. Both will complement each other," he said.

Mankad agrees. "There will be a parallel concept of stardom. But will it be a competitor to the big screen? I don't think so."

"When movies like 'Sooryavanshi,' 'Pushpa' and '83' were released,  the conversation around OTT was reduced because there is a magic that the big screen has and that will never die," he said. "At the end of the day you don't go to watch a film in theaters to watch the film, you go for the experience."