Aastha Khanna is working on setting ground rules on Bollywood film sets, focusing on making a safe space for consent during intimate scenes. The industry has a long way to go on building awareness around intimacy. 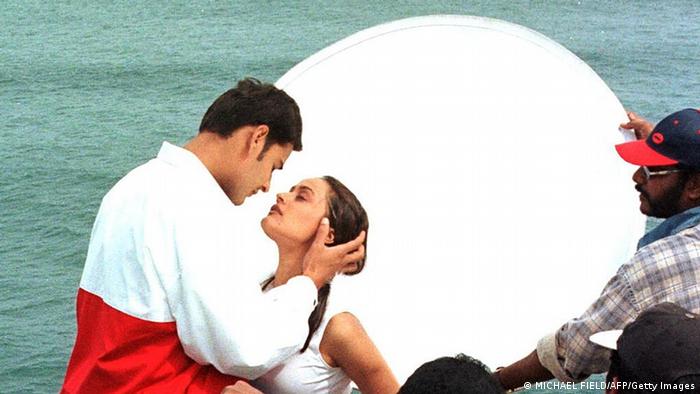 'Intimacy coordination is a foreign concept; actors are left to figure it out for themselves,' according to Bollywood's Amit Kaur

When Sakshi Bhatia was a director's assistant on the set of a Bollywood murder mystery a few years ago, the director of the film called for an intimate scene between the accused killer and the victim.

However, the victim was a 14-year-old female actor and the killer character was played by a 45-year-old male actor.

"It made me a bit uncomfortable, and I wondered if anyone had explained to her how the scene would be choreographed? A professional was needed to navigate the actors through the production, both when they were being filmed and when the studio lights were off," Bhatia told DW.

Production crews have normally been responsible for the well-being of actors on Bollywood sets. But now India's film industry has its first certified intimacy coordinator.

Aastha Khanna says she wants to create a safe space for actors on set while choreographing sex scenes. She is putting together a collective of intimacy professionals and is drawing up guidelines for Bollywood film producers.

She is hired for scenes involving nudity, simulated sexual intimacy and sexual violence.

"It was absolutely bizarre to see that while there were stunt coordinators for action sequences, and dance choreographers for Indian song-and-dance sequences, there were none for filming intimate scenes," Khanna told DW.

"Culturally, intimacy is not discussed. It is considered scandalous or provocative. Because it is taboo even behind the screen, it is extremely important for us to constantly have conversations about it."

While Khanna's role is new, there has long been a need for guidelines on filming intimate scenes in India's entertainment industry.

What does an 'intimacy coordinator' do?

"My role entails talking about consent and boundaries with the actors first, understanding the scene and choreographing it according to the director's vision. I also make sure new changes are not made post-production," Khanna told DW.

During her training at the Intimacy Professionals Association in Los Angeles, Khanna learned a variety of techniques using props like pillows, crotch guards, nipples pasties, tapes and modesty garments to create barriers while filming the simulated sex scenes.

She also learned about international intimacy protocols, nudity clauses in contracts, and power dynamics, during her training.

"Traumas and triggers are a huge aspect of what can get derailed during an intimate scene. It can flout somebody's boundaries and add trauma to their lives," she said.

However, hiring a professional intimacy coordinator adds to a film's budget, and is still largely unheard of in India's film industry.

In India, "intimacy coordination is largely a foreign concept and actors are mostly left to figure it out for themselves and are expected to be comfortable on their own." Amit Kaur, a director's assistant who worked on Indian films for a decade, told DW.

The role of #MeToo and intimacy consent

Two years ago, the HBO network made it mandatory to have intimacy coordinators on every set filming sexually intimate scenes. Soon, other big producers, including Netflix and Amazon Prime, followed suit.

In India, intimacy coordination has been increasingly talked about after several incidents.

"There have been many infamous incidents, where an actor kept kissing or inappropriately touching the actress long after the director shouted 'cut,'" Indian entertainment journalist Rohit Khilnani told DW.

"This constitutes workplace harassment, and an intimacy coordinator is paramount for safety," he added.

With more content being served on on-demand platforms, Khilnani says having an intimacy coordinator should be a standard on set.

"I was deeply affected by the #MeToo movement. I faced it myself as part of the crew and it was too commonplace. I decided to combine my passion for safety with my love for films," said Khanna.

She added that many young newcomers to the film industry are vulnerable to exploitation and conversations about consent need to take place outside of the set.

"MeToo in India has fizzled out. The people who were named are back to working with movies and directors. While the talk of intimacy coordinators is a welcome step, how do you ensure safety at all times? Some of these stories have come from the time actors first went for casting calls," Khilnani told DW.

The Indian entertainment industry is one of the largest in the world. This conversation will take time to reach all areas of the industry. Sakshi Bhatia said she thinks there is a long way to go.

"Intimacy coordinators are here to choreograph and make simulated sex look good on screen. If they are drawing salaries from the production houses, they might not have a lot of say on how a director wants to film intimacy. These scenes are a big draw for the audience and guidelines can be easily violated," she said.

A Bollywood film about the exodus of Kashmiri Hindus has sparked a huge controversy in India. While some people see it as a true depiction of the Hindu killings in the 1990s, others say it distorts historical facts.