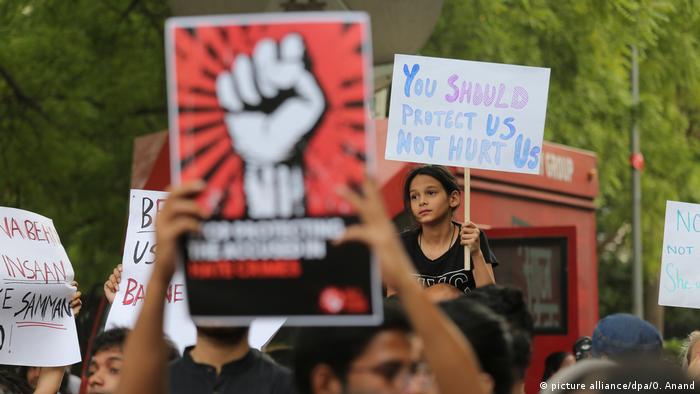 In October 2018, the global #MeToo movement against sexual abuse and harassment perpetrated by powerful men in society reached India's mainstream public discourse. A number of women came out with allegations and accounts of harassment on social media and other platforms.

Accusations were leveled against several prominent personalities, but perhaps the most high-profile one was the case against former junior external affairs minister, M.J. Akbar.

Journalist Priya Ramani, who had accused the former editor of inviting her to his hotel room for a job interview and behaving inappropriately, found herself at the receiving end of a 41-page defamation suit.

Two years later, a Delhi court acquitted her of all charges. Taking into consideration the difficulties that women face in filing harassment complaints, the court said, "the right of reputation cannot be protected at the cost of dignity."

It was hailed as a landmark judgment and celebrated by women across the country.

"This shows us that women can withstand any pushbacks … That it's not that easy to shut us down and silence our truths," Ramani told DW.

The aftermath of #MeToo

Like in other places across the world, the #MeToo movement generated discussion in India about sexual harassment within the workplace, particularly in the entertainment and film industries.

As an immediate aftereffect, more women were encouraged to speak up against their harassers, both publicly and anonymously.

Filmmaker Vinta Nanda had spoken up against veteran Bollywood actor Alok Nath, whom she accused of rape. "Before the movement, I was afraid to move because I felt isolated and ostracized," she told DW. But now, she added, "I know I am not alone."

"Most of the others who have spoken out feel the same way as I do and that is one massive step forward that the women's empowerment movement has taken," she said.

Nath was accused of sexual harassment by other women from the film industry, including actor Sandhya Mridul and singer Sona Mohapatra.

He was stripped of his membership of the Cine and TV Artistes' Association (CINTAA) after he failed to appear before a special committee. While the actor faced temporary backlash, there were no long-term consequences. The case against him was eventually dropped due to lack of evidence.

The case against prominent actor Nana Patekar, who was accused by actor Tanushree Dutta, was also dropped due to lack of evidence.

While many of the accused faced some loss of projects or assignments, most of them have been able to find work and acceptance in the industry.

Other public personalities, such as branding professional Suhel Seth and director Rajkumar Hirani, have been able to gradually resume their professional pursuits after an initial period of laying low and staying out of the public sphere.

However, making these discussions part of the public discourse itself has been a huge victory for survivors.

Not an inclusive movement?

It is important to note that before the #MeToo movement took off in India, law student Raya Sarkar had come up with a list of alleged sexual harassers in academia back in 2017.

The list had drawn mixed reactions from women in India. Many leading Indian feminists criticized it and recommended adherence to due process in cases of sexual assault and harassment.

"If due process were done with integrity, the victims would not have approached me in the first place," Sarkar told DW at the time.

She reiterated the failure of due process, which allowed predatory behavior from powerful men to go unchecked.

While the list failed to create a significant impact, it highlighted the fact that speaking out publicly is not always an option for those who lack the voice, or resources.

Encouraging women to speak out

Rukmini Sen, a professor of sociology at the Ambedkar University in New Delhi, says that many have raised the issue of the #MeToo movement not being inclusive, particularly when it comes to hearing the complaints of people from marginalized communities such as Dalits, queer, disabled, trans people and other non-binary persons.

"It is important to take this criticism on board, also because the law of the land only protects women, and not other marginal genders, from sexual harassment in the workplace," she told DW.

"There are definitely some fields where women can speak out comparatively more. However, in the last few years, we have seen students in higher educational institutions, women in the legal profession, in media and journalism, entertainment and film industry, all speaking out," Sen added.

While India's #MeToo movement seems to have achieved little measurable success, the movement has evidently made it easier for women to speak up against sexual harassment in the workplace.

The recent verdict has brought back into focus the issue of sexual harassment, which many women continue to face. "When the Priya Ramani verdict came in, I cried. I couldn't help myself. I felt vindicated. As for justice, it's been hard for those who weren't able to garner support among their friends, families and communities. But the recent victory of Ramani has been a victory for all the survivors," said Nanda.