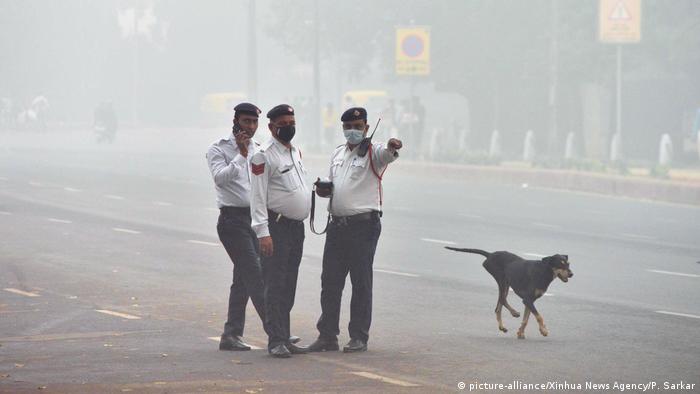 Every year, the residents of India's capital region and surrounding areas experience hazardous levels of air pollution at the beginning of winter.

Smoke from stubble burning in the adjoining farmland areas of the states of Haryana and Punjab, as well as fumes from vehicles and industry, enshroud the city as lower temperatures and slower moving winds trap pollutants in the air.

On Monday, the air pollution in New Delhi was classed as severe for the fifth consecutive day.

The Central Pollution Control Board's air quality index recorded severe levels of pollution between 450 and 499 at monitoring centers in the city, with 500 the highest pollution level on the scale.

That score is more than 20 times the limit deemed safe by the World Health Organization (WHO) — it roughly equals smoking 25 cigarettes a day.

"In addition, there are episodic dust transport events from surrounding areas. As a land-locked megacity, there are limited avenues for the polluted air to be flushed out of Delhi. Nor is Delhi in the advantageous position of enjoying replacement of air from relatively unpolluted marine regions," she said.

"Look at India, it's filthy. The air is filthy," said Donald Trump in the final US presidential debate, while justifying his stance on pulling the US out of the Paris climate deal. While his comments received a lot of backlash, experts warn that Delhi's air quality is bound to get worse as the festival season arrives in India.

Firecrackers during the Hindu festival of lights, Diwali, are expected to worsen air quality in mid-November.

A surge in COVID-19 cases, coupled with the rise in pollution, has made experts concerned about Delhi residents.

"Emergency hospital admissions linked with respiratory and cardiac stress and symptoms increase during winter months every year. Due to long-term exposure to air pollution, the health of the vulnerable is already compromised," Anumita Roy Chowdhury, director at the Center for Science and Environment (CSE), told DW.

"Studies show how children are growing up with smaller lungs, that every third child in Delhi has impaired lungs and a large number of children have pulmonary hemorrhage among others," she said.

"When smog episodes hit severe levels, even the healthy population in the city is affected."

In 2019, India's Supreme Court asked the states of Punjab and Haryana to stop crop burning, but that is yet to take effect.

Last week, Indian President Ram Nath Kovind signed off on the creation of a committee to come up with solutions for air pollution. The National Green Tribunal has reportedly considered a ban on firecrackers from November 7 to 30.

"Immediate steps are needed to segregate waste and introduce recycling. Industries require access to affordable clean fuels. New emissions standards for power plants will also have to be implemented on time," she underlined.

"We also need to change over to LPG for households and open eateries and eliminate use of solid fuels. This requires strong intervention with a firm roadmap and strong compliance strategy."

Hundreds of thousands of newborns, mostly in India and sub-Saharan Africa, died from air pollution in 2019, a study has found. Noxious fumes from cooking fuels are blamed for causing the majority of the babies' deaths.

Elections in India usually center around communities, religion, jobs and development. But political parties need to focus on reducing pollution and reining in the environmental crisis, young people say.