Air pollution in New Delhi has spiked after India's biggest fireworks party of the year. Residents woke up to a pall of grey left behind by acrid smoke from fireworks that remained trapped in the city's cool air. 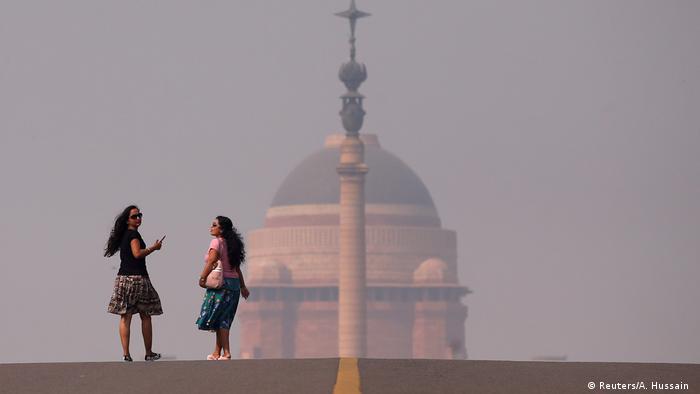 Air pollution in New Delhi and several other Indian cities deteriorated on Monday to the worst recorded level, a day after revelers set off firecrackers and rockets to celebrate the Hindu festival of lights, Diwali.

The smoke from fireworks added to emissions from cars and trucks as well as stubble fires by farmers around Delhi that have made it the world's most polluted capital.

The air quality index, which measures the concentration of poisonous particulate matter, touched 500 in several parts of Delhi, including the international airport, in the early hours of Monday, the maximum recorded by the government's Central Pollution Control Board.

Anything above 401 is classified as "severe." Air pollution at that level can seriously affect those with existing respiratory illnesses, and even those who are healthy.

The levels have remained above 300 since early Monday morning, or "very poor," which can cause respiratory illness after prolonged exposure.

The overall air quality index across the city, however, was at its lowest in three years due to favorable wind speeds and some reduction in the use of fireworks during Diwali, according to SAFAR, a government-run monitor.

In an effort to limit pollution over the festival period, India's Supreme Court had ordered residents to only use safe and environmentally-friendly fireworks that emit less smoke and soot. It also stipulated that the fireworks could only be set off for a maximum of two hours, and only in designation areas such as parks — a ruling that appeared to go largely ignored.

Air pollution has been a persistent problem in New Delhi, a city with a population of 25 million, and observers say the city has been struggling to create a coordinated and well-thought-out approach to tackle the issue.

The government has taken a slew of measures, including shutting down thermal power plants and banning construction during the pollution season. In November, a bid to reduce road traffic will be introduced with odd and even registration plates allowed on Delhi roads on alternate days.

Several other Indian cities have initiated some pollution control action in recent years, but there has been little or no political will to enforce anti-pollution laws.