Tense India-China border raises fears of inadvertent escalation | Asia | An in-depth look at news from across the continent | DW | 09.09.2020 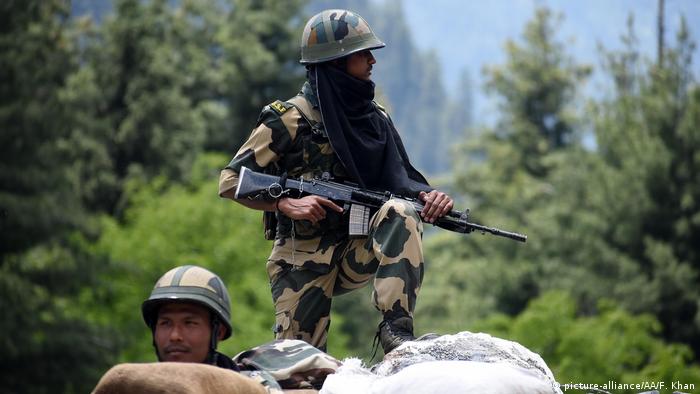 Over the past few months, Chinese and Indian troops have been engaged in aggressive posturing at multiple locations along the two nations' de facto border, known as Line of Actual Control, raising tensions between the world's two most populous countries.

The two nuclear-armed neighbors have accused each other of firing in the air during a fresh flare-up in the Ladakh region on Monday, violating long-standing protocols to avoid using firearms along their undemarcated borders.

"The Sino-Indian border conflict has intensified further over the past few weeks, and I still believe that neither side wants a war, but neither side is willing to back down from it either because of the symbolic and psychological consequences," Derek Grossman, a senior defense analyst at the RAND Corporation, told DW.

"The situation is tense," an official in New Delhi told the Reuters news agency on Wednesday, adding that Indian and Chinese troops were squaring off in close proximity in at least four locations south of Lake Pangong Tso that both sides lay claim to.

Srikanth Kondapalli, professor of Chinese studies at New Delhi's Jawaharlal Nehru University, shares a similar view. "The situation on the ground is tense. Yesterday, the Chinese air force was on the second level of alert and surface-to-air missile batteries were activated to counter any adversary air force movement," he told DW.

"Although the firing was in the air and not against each other, it's definitely an escalation," he added.

Skirmishes are not new to the 3,488-kilometer (2,167-mile) frontier between India and China, most of which remains disputed and undemarcated. The two countries fought a war in 1962, but the border issues have lingered on.

The latest standoff began on May 5, when a scuffle broke out at Lake Pangong Tso, located 14,000 feet (4,270 meters) above the sea level in the Himalayan region of Ladakh. Indian and Chinese army personnel then clashed with iron rods and sticks, and even resorted to pelting stones, injuring soldiers on both sides.

Days later, on May 9, dozens of Chinese and Indian soldiers were injured in fistfights and stone-throwing when another fight erupted at Nathu La Pass in the Indian state of Sikkim, nearly 1,200 kilometers to the east along the Line of Actual Control (LAC).

On June 15, a clash between the two sides in Galwan Valley resulted in the deaths of 20 Indian soldiers and an unknown number of Chinese troops.

Analysts believe the tension was triggered by India's infrastructure activities along the LAC as well as New Delhi's increasing military capabilities and decision to change the status of India-administered Kashmir in 2019.

Working toward a solution

Several rounds of talks between Chinese and Indian military and diplomatic officials have so far failed to break the impasse. Both sides have continued to hurl accusations at each other of provoking the other by engaging in aggressive tactics.

Days before the fresh flare-up, Indian Defense Minister Rajnath Singh held talks with his Chinese counterpart Wei Fenghe in Moscow, where both sides had agreed to "de-escalate" the situation. The meeting on September 5 was the first face-to-face political contact between India and China since the standoff erupted four months ago.

"I don't think there will be any compromise there since the situation [in India] is being handled by the Ministry of Defense. MEA [Ministry of External Affairs] is playing a marginal role," said professor Kondapalli.

Nevertheless, RAND analyst Grossman stressed that it's always helpful to keep the dialogue open. "What the two foreign ministers should do is tone down the language and work towards a diplomatic solution," he said.

What's behind China and India's border dispute in the Himalayas?

Observers say that although world powers may have initiated diplomatic efforts to calm the situation, both India and China are big states that do not want to be seen as being told by others what to do. "They want to convey that they are beyond the control of world powers," said Kondapalli.

Nevertheless, the recent clashes have not resulted in either Beijing or New Delhi gaining the upper hand over the other. "They would like to break the stalemate," said the expert, adding that the "two sides may be looking at a possible Russian mediation."

"In the case of the US, the Chinese have rejected [mediation], and the Indian side did not mention anything explicitly," Kondapalli pointed out, underlining the fact that New Delhi currently shares a far closer political partnership with Washington than does Beijing.

Other world powers may also seek to mediate in a bid to avert a destructive conflict between the world's two most populous nations.

"My sense is that Germany and the EU are perceived as more neutral than the United States. So if tensions between China and India escalate significantly, Germany and the EU can act as mediators more effectively," said Grossman. "But ultimately, the issue of the China-India conflict needs to be resolved diplomatically and possibly also by resuming informal meetings between Indian Prime Minister Narendra Modi and Chinese President Xi Jinping."

Indian newspapers and Chinese state media are demanding a continuation of dialogue after a bloody incident on the border. From an Indian perspective, however, New Delhi must "wake up" and assess Beijing's push for power.

Can China and Pakistan profit as Bangladesh turns from India?

Although Bangladesh is a traditional ally of India, New Delhi's controversial citizenship law has strained relations. Other regional powers are now taking advantage of the rift to gain a foothold at India's doorstep.