India′s ban on Chinese apps threatens economic ties with Beijing | Asia | An in-depth look at news from across the continent | DW | 30.06.2020

Citing threats to security, New Delhi has banned dozens of Chinese apps including TikTok, WeChat and UC Browser. Many young users of Chinese apps have hailed the government's decision amid rising tensions with China. 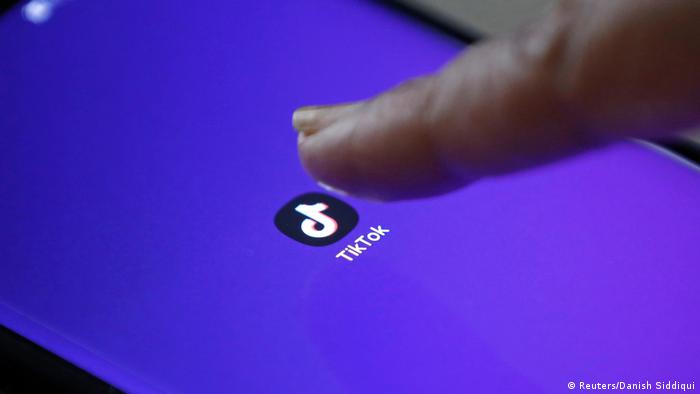 India has banned 59 Chinese-owned apps, including TikTok, with authorities saying the apps were used for "activities" that were"prejudicial to the sovereignty and integrity of India, security of state and public order."

The information technology ministry (IT) issued a statement announcing it had received reports that the mobile apps were "stealing and surreptitiously transmitting users' data" to servers located outside India.

The ban came less than two weeks after a deadly border clash in the Himalayas between Chinese and Indian troops, which saw at least 20 Indian soldiers and an unknown number of Chinese soldiers lose their lives.

Indian protesters have been calling for a boycott of Chinese goods since the June 15 confrontation in the remote Karakoram mountain border region. IT officials said they made the decision to ban the apps "in view of the emergent nature of threats."

Some analysts say the ban is an opportunity to confront China without the use of force. "India doesn't have military might against China, so it's using the soft power of business to make China pay for its activities at the border," a Delhi-based lawyer, who declined to be named, told DW.

Indian apps can now 'take over'

Earlier this month,India already tried to ban the Chinese Bytedance-run TikTok, only to remove the ban amid public backlash.

WeChat and TikTok have millions of users in India, while the UC Browser was set to beat Google Chrome. Several users with access to patchy cellular data could use UC Browser, which compressed data and sped up cellular traffic. Meanwhile, China's Xiaomi occupied 30% of India's smartphone market in the first quarter of 2020.

But Aliva Chatterjee, a teenager living in the city of Chinsurah in West Bengal, is unfazed by the ban on Chinese apps. "I mainly used TikTok to edit my videos, but now I will simply shift to using another app like InShot," she said. Optimistic about the ban, she added: "With apps like Shein banned, Indian apps can take over and this will help in the growth of the Indian economy."

Aliva's view is shared by hundreds of users of Chinese apps including TikTok, Shein, WeChat and Weibo. "We don't want TikTok anymore, bye bye TikTok," wrote a user on Instagram after TikTok India issued a statement following the ban. Those supporting TikTok were called out by users and some were labelled "anti-national."

For Salman Khan, a resident of Surat in Gujarat state, TikTok was a source of fame. He said he has been targeted on social media for his use of the app. "Will you be a traitor to the country just for fame?" a user on social media platform Instagram asked Salman.

"I feel good after TikTok is gone, honestly. There's no productivity in making videos on TikTok … Also, tell the government to ban the app properly. It's still installable from the app store," Avishek Ghoshal, a resident of Sheoraphuli, told DW. The apps can't be automatically erased from devices where they are already downloaded.

The decision has left a grey area for businesses, as several of the banned apps were backed by Chinese conglomerate Tencent. The tech giant has invested in a number of Indian startups including "Swiggy," a food delivery company, "Hike," an instant messenger and "Practo," a healthcare app. Many fear that the ban may discourage Chinese investment in India.

Meanwhile, Chinese foreign ministry spokesperson Zhao Lijian said on Tuesday that it was India's responsibility to uphold the rights of Chinese businesses in India.

New Delhi has also been criticized for applying the ban only to a select number of apps, leaving out Tencent-supported gaming apps like PUBG, which is also supported by Paytm, a popular digital payment system in India backed by the Alibaba Group, yet another Chinese e-commerce conglomerate.

According to Shrestha Banerjee, a student at the National Law University and Judicial Academy in Assam state, the ban is futile if it doesn't tackle the entire supply chain. "Many investments will be stalled and traders will suffer from deficit as China is one of the largest trading partners with India. We need to define what the exact extent of China's role is in our lives, and we need to have our local business alternatives ready before we should take such harsh actions…" said Banerjee.

Read more: How realistic is India's 'Made in China' boycott campaign?

But for Ashutosh Maurya, a vegetable seller in Ghatkopar, Mumbai, the ban on TikTok is a blessing. "People in the slums died while making videos on rooftops and on railway tracks. Now, those people will stay at home. We can only let China penetrate as much as we allow it."