Can India wean off its economic reliance on China? | Business | Economy and finance news from a German perspective | DW | 06.07.2020

The recent border skirmish between the two Asian giants, the deadliest in decades, over the disputed border in the Himalayas could lead to an economic fallout and more protectionist tendencies in India, experts say. 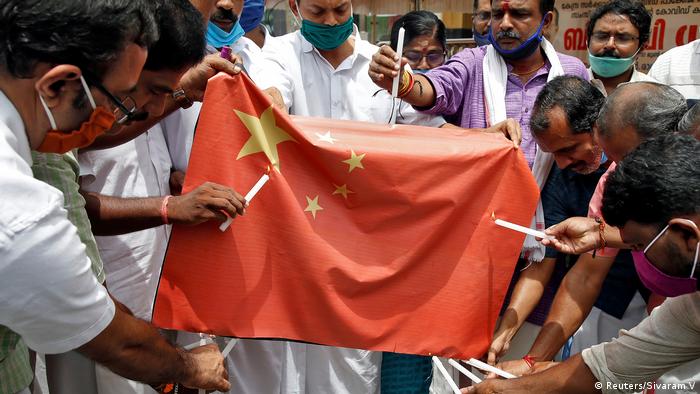 The recent clashes between Chinese and Indian troops along the two nations' disputed border have heightened anti-China sentiment in India and triggered calls for a total ban on trade with that country. Twenty Indian troops were killed in the fighting. China also reportedly suffered casualties but has so far released no information.

On Indian streets and media, people have been urging Indian consumers to "teach China a lesson" by boycotting Chinese goods. Last week, India said it had banned 59 Chinese-owned apps, including TikTok, while Chinese companies are being blocked from participating in highway projects and are banned from investing in micro, small and medium-sized enterprises.

Reports suggest that goods from China are being delayed at Indian ports, and authorities are planning to impose higher tariffs and stringent quality controls on shipments. A report published by The Indian Express, an English-language newspaper, stated that Indian exporters have started facing similar issues with their consignments at the Chinese ports.

"As of now, it is not quite clear which goods are being held up at the ports and what the extent of the delay is. The exact impact on businesses will clearly depend on their inventory positions and so on and this will vary quite widely across sectors and firms," he said. "I imagine most businesses can manage delays, but perhaps not complete blockades." 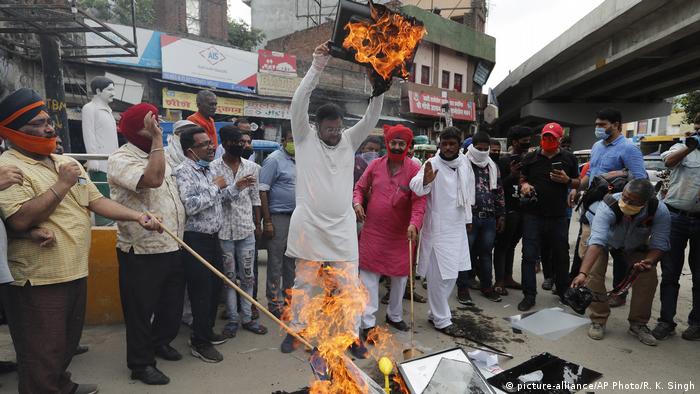 Despite popular demand for a blanket ban on Chinese goods, experts say it's not feasible given the close commercial ties between the two nations. Bilateral trade was worth $88 billion (€78.3 billion) in the 2018-19 fiscal year, but India recorded a huge $53.5 billion deficit with China — the biggest trade deficit India has with any country.

Furthermore, India has become a major destination for Chinese investment. Major Indian startups like delivery app Zomato and payments app Paytm have received millions of dollars' worth of investment from China. The total planned and current Chinese investments in India are estimated to be about $26 billion, according to US think tank Brookings.

Some Indian firms also import raw materials from China that go into making their goods, and banning them could hurt Indian manufacturers and disrupt supply chains.

Customs hurdles for Chinese products at Indian ports "are bound to have an adverse impact on Indian manufacturing because of the existence of supply chains and the dependence of a host of Indian firms on Chinese-made components and materials," Sumit Ganguly, an India expert and professor of Political Science at the Indiana University Bloomington, told DW.

"There is no easy or swift pathway for India to reduce its current dependence on the PRC [People's Republic of China], the rants of various Indian television hosts and commentators aside," Ganguly said. "Decoupling from the PRC will be a slow, patient process."

Observers say a trade conflict will likely be costly for both sides, particularly given the timing of the current flare-up. Both India and China have already been hit hard by the COVID-19 disease, which has created massive health, economic and humanitarian challenges.

Their economies are experiencing a sharp deceleration in growth. In India's case, the stringent lockdown the government imposed in late March to curb the spread of the virus led to severe economic costs. The International Monetary Fund (IMF) now expects India's GDP to shrink 4.5% this year, which would be its first contraction in decades.

Even before the pandemic, India was experiencing an economic slowdown, with growth dropping to an 11-year low of just 3.1% in the quarter ending March 2020.

To counter the economic fallout from the coronavirus health crisis and boost growth, Indian PM Narendra Modi launched "Atmanirbhar Bharat," a campaign for a self-reliant India that encourages firms to make goods in the country instead of relying on imports. This is in addition to the refrain of "Make in India" that has been coined since Modi came to power in 2014.

"Frankly, I think it amounts to foolish, anachronistic and pointless sloganeering," Ganguly said, adding that this is a "populist cry" and "will amount to little or nothing."

"The initial emphasis on self-reliance was coupled with rampant protectionism and had terrible consequences for Indian industry not to mention the hapless consumer," he argued.

In the initial decades after India gained independence from British colonial rule in 1947, import substitution industrialization, a policy focusing on replacing imported goods with domestically produced ones, was the guiding principle of economic policymaking in New Delhi.

Successive Indian governments from 1947 to 1991 followed this inward-looking model of economic development, but it shackled private enterprise and ultimately proved unsuccessful in transforming India into an industrial and economic power.

As a balance of payments crisis in 1991 pushed the country to the verge of bankruptcy, the government of the day was forced to introduce major reforms and liberalize the economy.

"If 'self-reliance' is merely an exhortation to firms to become more productive — that is fine," Krishna said, referring to Modi's latest campaign. "On the other hand, if it is a coded/euphemistic call for import substitution, I would be worried: India's experience with this in the past has been truly disastrous," he added.

"Regarding the dispute with China, I sincerely hope it is not used as a pretext for a generalized return to protectionism."

India's coronavirus crisis has pushed millions into forced isolation and unemployment. Health experts warn that anxiety, depression and suicide are on the rise and that mental health could be the country's next crisis. (01.07.2020)

In a bid to draw investment and boost industry in the aftermath of the coronavirus pandemic, some Indian states have suspended most labor laws. Many fear that the moves may lead to slave-like conditions in workplaces. (25.05.2020)