Coronavirus triggers mental health crisis in India | Asia | An in-depth look at news from across the continent | DW | 01.07.2020 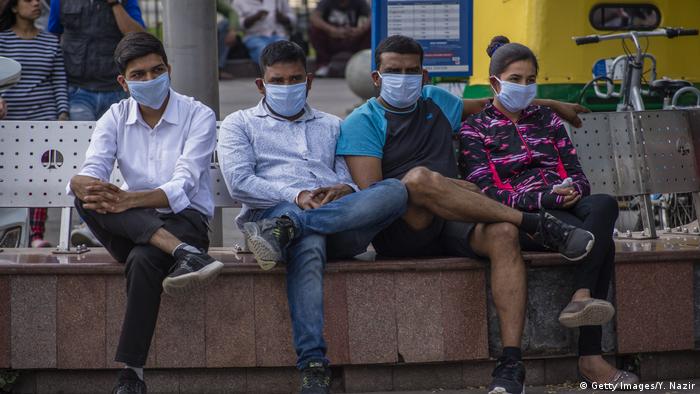 Shagun has spent the last three months consciously avoiding any news from the outside world. She doesn't dare scroll through her social media. The 23-year-old lives in Gurgaon, southwest of New Delhi, and is suffering from severe clinical depression amid the global coronavirus pandemic.

"My symptoms go up and down all the time …" Shagun said. "Suddenly I had no clue what to do next. It made me feel stuck. Everything was shut and there wasn't much to divert my attention and focus towards, which led to more negative emotions."

On March 24, India introduced one of the world's most severe lockdowns. The nationwide shutdown disrupted the lives of more than 1.3 billion, resulting in mass unemployment and high levels of distress among large sections of the population. Those who didn't experience mental health obstacles prior to the pandemic have also found problems coping.

For Shagun, the lockdown meant missing an internship opportunity that would have helped secure her a place in a good graduate school. The pandemic and subsequent measures made it difficult for Shagun to deal with her emotions.

"There came a time when I completely lost my appetite. I could not eat for 10-11 days. Neither could I sleep properly," she said.

For Shagun, fears of contracting the novel coronavirus compounded her mental state.

"This really triggered my paranoia. I started washing my hands about 20 times a day and stopped stepping out altogether," she said, adding that she had accidently broken her prescription glasses but refused to go out for another pair, terrified she might become infected with the virus. She recounted her feelings of restlessness as she waited for the lockdown to come to an end – every announcement of an extension to the lockdown was accompanied by feelings of hopelessness.

"Before, I would go out for a run, or go to the gym, or meet friends. All that stopped and I feel caged in," she said.

A recent survey by the Indian Psychiatry Society (IPS) found that the number of mental illness cases had increased by 20% since the lockdown, and that at least one in five Indians were affected.

The IPS warned that the loss of livelihood and increasing levels of economic hardship, isolation, as well as the rise in domestic abuse amid the pandemic could trigger a new mental health crisis in India and "may substantially increase the risk of suicide."

"I suspect we're going to start seeing the impacts of mental health now. The crisis has gone on for long enough and people are running out of steam," Soumitra Pathare, Director of Centre for Mental Health Law and Policy, told DW. "We all ultimately have a limit to how much resilience we have, and if the stress is too much and continues for too long, we will run out of our capacity to deal with it," he added.

Read more: Coronavirus in India: A migrant woman's story of survival and aspiration

Psychiatrists warn that children are at particular risk of developing mental health problems as a result of the pandemic, citing forced isolation and increased levels of family violence during the lockdown as detrimental to their wellbeing.

"We do know that adversity in childhood is known to be a risk factor for having mental health problems when they grow up. The current situation is going to create those risk factors," Pathare said. "For instance, cases of child abuse might go up. If adults are more stressed out, they are more likely to be violent to their kids. So clearly this is a huge red flag."

A recent survey by independent researchers reported suicide as the leading cause of non-COVID-19 related deaths during India's lockdown.

According to the survey, 343 people died by suicide since March this year, with 125 of them due to fears of infection, loneliness, a lack of freedom of movement, and the inability to go home. The study also cited financial distress and alcohol withdrawal as suicide factors.

According to Pathare, people particularly at risk of suicide are those struggling with alcoholism. "In the first two weeks, there were a huge number of suicides because of alcohol withdrawal," said the psychiatrist. "People went into unplanned alcohol withdrawal which ultimately led to a cluster of suicides. This was an India-specific feature."

Pathare is concerned that mental health will be India's next major crisis over the next 6 to 12 months. "The economic crisis, which everyone can see coming, is going to result in more suicides, more alcohol-related problems, and more mental health-related issues. We know this from previous financial crises," he said.

"There's a lot of data from 2008 which show what happens in the mental health space after an economic crisis … There is no excuse for our societies and governments to not prepare," he warned.

In 2017, the Narendra Modi government introduced the Mental Healthcare Act to guarantee citizens' access to government-funded mental healthcare and treatment.

While Pathare applauded government efforts in the past decade to increase its capacities in mental healthcare, he said India is still left with a large number of people whose suffering goes untreated.

"Mental healthcare in India has undoubtedly improved in the past 10 years. But has it improved enough? Undoubtedly not."