Coronavirus puts pressure on India′s private security guards | Asia | An in-depth look at news from across the continent | DW | 22.06.2020

Most of these private security guards in big cities are migrant workers. The pandemic has made many of them jobless, and those who are still at work face health risks with no social security. Aditya Sharma reports. 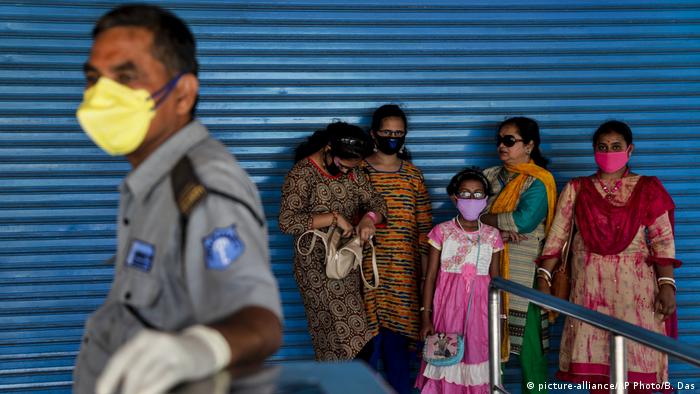 On a mid-June afternoon, with temperatures soaring past 40 degrees Celsius (105 degrees Fahrenheit), 55-year-old Rakesh Jha stands alert outside the gate of a grand house in an upscale New Delhi neighborhood. Since early morning, Jha has been receiving visitors, dealing with delivery boys and, of course, guarding the house.

To protect himself from the novel coronavirus, Jha has donned a cloth mask that he bought at the start of the pandemic.

The virus hasn't changed the nature of his work. He continues to work 12 hours a day and seven days a week without any written contract or social security.

Jha has fears he could catch the coronavirus, but he is also relieved to be back at work. He was jobless for two months during the nationwide lockdown, which Indian Prime Minister Narendra Modi imposed in March to contain the spread of COVID-19.

He is a migrant worker like most other security guards in the capital. After the outbreak of COVID-19 in India, he and his family decided not to make a risky journey back to their village in the Indian state of Bihar.

"I have nothing to go back for," Jha told DW. "At least in Delhi, there was a chance that I could be called back to work sooner or later. That's better than starving at home."

Security guards in India's major cities are usually illiterate, middle-aged men. They're mostly migrant workers who lack employment rights and are often exploited by their employers.

Raji Ram, a 32-year-old guard, often has to work double or triple shifts in case his colleague on the next shift doesn't turn up.

"In case I get infected with coronavirus, I'll have to pay for my treatment. Also, I will not be paid for the days I miss at work," he told DW.

Om Prakash, a Nepalese security guard is facing a similar ordeal. Nepal offered to repatriate its stranded citizens in India but Prakash didn't take it.

Prakash works 12 hours a day. Unlike Jha and Ram, he has received protective gear from his employer. "I don't worry about getting sick as it is not going to help me. I have to feed my family," he said.

Joga Singh, who works as a security guard at a government building in Central Delhi, has a more secure and better paying job. He earns nearly five times more than the guards working in the private sector.

While he also works 12 hours a day, he is entitled to holidays, overtime payment, social security and some paid leaves, which he uses to visit his village in the northern state of Uttarakhand.

"During the lockdown, I spent two months in this building," he said, adding that with public transportation closed, he couldn't commute to work each day. "Since most of the building employees were working from home, I had little exposure to people," he said.