In the shadow of the atomic bomb: Life during the Cold War | Culture | Arts, music and lifestyle reporting from Germany | DW | 06.04.2022

In the shadow of the atomic bomb: Life during the Cold War 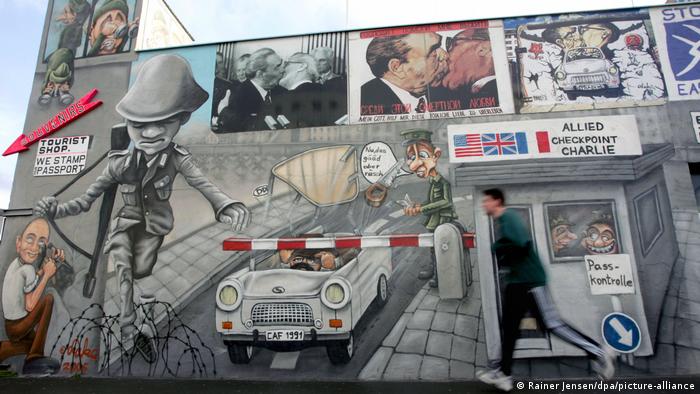 "Susanne is easily tempted to chatter." That comment was in my report card at the end of the first grade, in the summer of 1972.

Which is why what my parents now demanded of me was truly harsh punishment: We were on a train and I was to be absolutely quiet when we reached the border and were checked.

This "border" in question was the one that divided Germany into two states until the fall of the Berlin Wall in 1989: the Federal Republic of Germany (FRG) and a member of NATO on the west, and the German Democratic Republic (GDR) and Warsaw Pact signatory on the east.

Led by the United States in the West and the Soviet Union in the East, the two sides would be embroiled in a weapons-laden standoff for some four decades. Once allies, who together with Britain had defeated Nazi Germany in World War II, the US and Soviet opposing ideologies and systems — capitalism in the West and communism in the East — saw this alliance rapidly disintegrate.

A temporary alliance: Heads of state Churchill, Truman, and Stalin in 1945

Therefore this border, which we were now approaching to exit the East and enter the West, was one of the most closely guarded in the world. It was quite literally the "dividing line" of the Cold War.

When the train slowed down, I nervously fidgeted on the seat that smelled of plastic, exchanging silent glances with my little brother. The other passengers were silent as well, with only occasional soft whispers punctuating the silence. Outside, the sun was shining; inside there was a sense of unease. 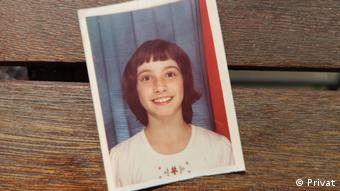 This picture would have been invalid as a passport photo: Author Susanne Spröer's ears are covered

After what seemed like an interminable time, the compartment door opened and grim-looking GDR border guards in drab grey uniforms began their check.

"Papers!" My parents handed over visas and passports. The officers then scrutinized each of us against our respective passports for an agonizingly long time.

"Show your ears!" — our ears had to be clearly visible in passport photos. I brushed back my hair, trembling and sitting quietly as a mouse, with my heart caught in my throat.

The border officials never smiled — not even at us children.

Frostiness, silence, and hours of waiting: That's what the Cold War felt like to me, long before I even knew what the term meant.

Yet I was privileged to be allowed to cross this border toward the West at all.

The GDR barred its citizens from traveling to the West, with the exception of only a select few. Some attempts to leave East Germany ended fatally. At least 500 people died trying to escape over the border and the Berlin Wall; the exact number remains unclear.

But we came from the West, and had to travel to the GDR if we wanted to visit my mother's foster parents, Uncle Max and Aunt Frieda in Karl-Marx-Stadt (now known as Chemnitz). They had taken care of my mom as a child, when my widowed grandmother had to work.

When my 13-year-old mother and grandmother fled to the West in 1956, they and many other relatives stayed behind in the GDR.

In the West, my mother met my father, and they married in 1963 — six months after the Cold War almost reached a tipping point during the Cuban missile crisis in 1962.

Yet the term "Cold War" plays down the fact that despite no direct military confrontation between the two superpowers themselves, namely the USA and the USSR, numerous proxy wars over territory, resources and ideological spheres of influence were fought elsewhere: in Korea and Vietnam, on the African continent and in Afghanistan.

Around 22 million people died in these bloody conflicts, but I only learned about all this much later, at school and during my further studies. 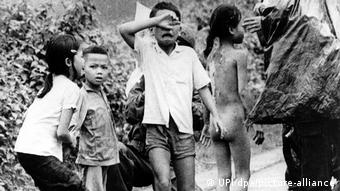 While I was traveling to the GDR, children in Vietnam were being bombed with napalm

Back in 1972 though, I was a naturally chatty six-year-old sitting on a train, feeling thoroughly intimidated. For there was something to keep mum about — and it had to do with my feet.

In the communist planned economy, there were strict regulations for the import and export of goods.

Many things were not allowed to be imported, for example, "printed matter that contradicted the interests of the GDR or its citizens," as one information brochure put it.

Given that such formulation was open to arbitrary interpretation, even Mickey Mouse magazines could have been considered "undesirable Western propaganda."

When leaving the East, on the other hand, it was strictly forbidden to export important GDR products — which included children's clothing and shoes. And that was exactly what I had on my feet: a pair of red sandals. 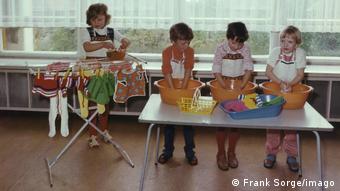 My parents had bought them during our visit using GDR marks, which every traveler into the country was obliged to use in exchange for foreign currency, and which they could not then exchange again before leaving the GDR.

Since we stayed with Uncle Max and Aunt Frieda, we had trouble spending all the exchanged East German marks every time.

What is now merely a bizarre anecdote was rather risky back then: Violations of the GDR's customs and foreign exchange regulations were subject to heavy fines, with the threat of arrest and pre-trial remand for serious violations. And one never knew what constituted a serious violation.

Anywhere but the GDR

Over the years, I lost contact with Uncle Max and Aunt Frieda and the rest of our family in the GDR.

As a young woman, I longed for the south, traveling to France, Spain or Italy, which were wonderfully uncomplicated. I only crossed the inter-German border when I had to. It almost always took hours before we were allowed to continue our journey, with dread hanging over me every time. 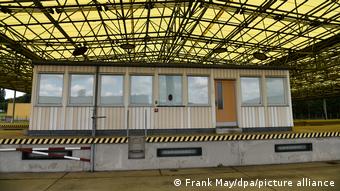 Apart from that, the Cold War was a rather vague threat to me, just like for many young people in Western Europe. We knew the world as divided into two blocs — and I never thought Germany would be reunified.

But I was convinced that the two blocs should finally make peace.

At the start of the 1980s, the arms race entered a new phase with the deployment of the Soviet SS-20 medium-range missiles and the NATO Dual Track policy, which provided for further missile deployments by NATO in Central Europe if the disarmament negotiations between the two superpowers failed.

This led to the largest peace protests Germany had seen up to then, driven mainly by the Green Party, segments of the Social Democratic Party (SPD) and the churches. 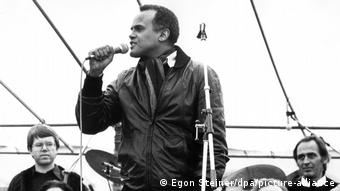 More than 300,000 people attended a peace demonstration at Bonn's Hofgartenwiese in October 1981: Heinrich Böll, the Nobel Prize winner for literature, whom I admired, was there and US musician Harry Belafonte performed there too.

German singer and songwriter Nena's " 99 Luftballons" — a song alluding to the paranoia of the Cold War — received much airplay in 1983. It was re-recorded in English later that same year as "99 Red Balloons"; both versions became chart-toppers in various countries.

I was a staunch pacifist at that time. I felt the same way as my grandmother, who had experienced two world wars and lost her husband and brother in the process.

After all, the Second World War started by Germany had led to the division of Germany and the subsequent Cold War in the first place.

That's why in 1985 Sting's song "Russians" resonated with me. When US President Ronald Reagan referred to the Soviet Union as an "evil empire," I could not and would not share such a worldview. Sting, on the other hand, appealed to the power of humanity.

Recently, Sting re-recorded the song in support of Ukraine. After all, one of the lines goes, "The Russians love their children too." And today, as in the 1980s, I hope that Russian mothers and fathers will love their children so much that they will finally take a stand against this cruel war that contravenes international law, and through which Russia's President Putin has invaded Ukraine. Because not only countless innocent Ukrainians are dying as a result of it, but also young Russians.

Postscript: End to a horrid era 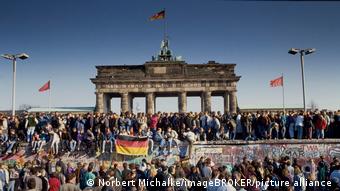 The wall has fallen! And we want to go there. Brandenburg Gate in November 1989

When I heard on the news that the GDR border had opened on that fateful night of November 9, 1989, I called my grandma and my parents. We cried over the phone.

My brother and I spontaneously decided to drive to Berlin. We got as far as the Marienborn border crossing, but that was still 180 kilometers (112 miles) away from Berlin, and traffic on the transit route to city was at a standstill. So when our passports were returned, we turned around and helped tow a stalled Trabant car, whose driver was desperate to get to the West.

Buoyed by the chaotic merriment around us, we toasted with sparkling wine. The border no longer felt threatening.