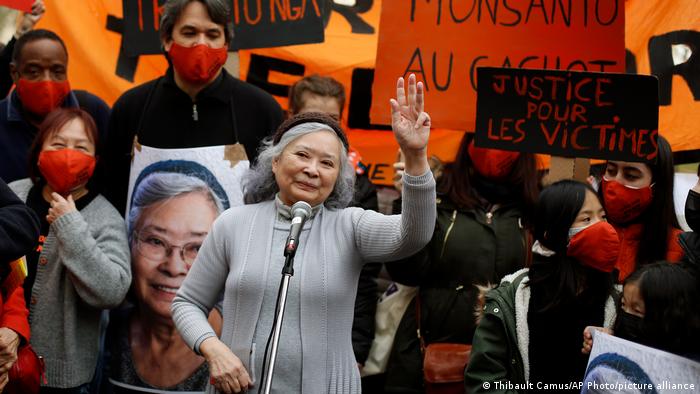 Tran To Nga began the legal battle in 2014

A French court on Monday ruled a complaint against 14 firms over the production or sale of  the highly toxic Agent Orange defoliant to the United States during the Vietnam War was "inadmissible."

The court in the Paris suburb of Evry said it did not have the jurisdiction to judge a case involving the wartime actions of the US government, the ruling said.

The case was brought forward by Tran To Nga, a French woman of Vietnamese origin. The defendants included US agrochemical firm Monsanto, now owned by German giant Bayer.

Military veterans from the US, Australia and Korea previously won compensation for the after-effects of Agent Orange. But a verdict in favor of a Vietnamese victim would have set a precedent.

The court's ruling meant that it believed that the companies, which the plaintiff had sued, were not responsible for the production of Agent Orange during the Vietnam War, said DW correspondent Marina Strauss.

Tran To Nga earlier said that if she lost "the first step of this case she will go into appeal together with her supporters," Staruss added. Tran is backed by several NGOs and Vietnamese victims.

How did the plaintiff react?

Tran told DW she was saddened by the decision, but that she was prepared for this possible outcome.

She plans to push forward with an appeal, with the hopes that the actions carried out in Vietnam will one day be deemed unlawful in the courts.

"I want to keep on fighting," Tran told DW on the phone following the court's decision.

Who is Tran To Nga?

Tran began the legal battle in 2014, blaming the companies for injuries sustained by her, her children and countless others Vietnamese victims.

Tran worked as a journalist and activist in Vietnam in her 20s. She said she was suffering from Agent Orange effects, including Type 2 diabetes and an extremely rare insulin allergy.

The 79-year-old also said she contracted tuberculosis twice and developed cancer, and one of her daughters died due to a heart malformation. She described the case as "the last fight" of her life.

What about the defendants?

The multinationals argued that the use of the chemical agent was the solely US military's responsibility.

A Bayer representative was quoted by the AFP news agency as saying that "suppliers during the war" were not responsible.

They also rejected the jurisdiction of the court. A lawyer for Monsanto said the US had deployed Agent Orange in the interest of "national defense."

What is Agent Orange?

For over a decade, the US military sprayed tens of millions of liters of the defoliant chemical to stop the advances of communist North Vietnamese troops and deprive enemy combatants of food sources during the war.

Millions of people in Vietnam, Laos and Cambodia were exposed to Agent Orange.

Generations of children continue to be born with a high incidence of disability, including Down syndrome, cerebral palsy and extreme facial disfigurement. Such effects are believed to be linked to the chemical.

This article was written in part with material from news agency AFP.