Agent Orange: Bringing the tragic legacy of the Vietnam War to an end

The United States has fully lifted its decades-old ban on weapons sales to Vietnam, President Barack Obama announced on Monday during a landmark visit to Hanoi. But other remnants of the war are not so easy to mitigate. 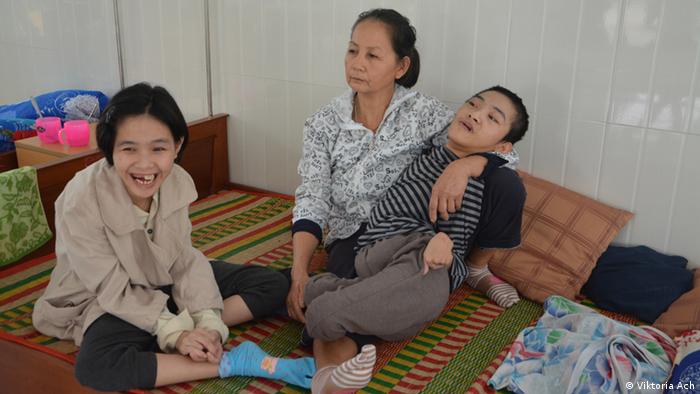 A dirt path leads to the House of Solace for Victims of Agent Orange, just a few miles outside Danang, a rapidly growing metropolis with skyscrapers and sandy beaches on the coast of central Vietnam. The newly built House of Solace, privately funded by a Singaporean businessman, looks like a spacious hospital ward with a dozen beds, one for each ''child."

The 'children' of Agent Orange

These victims of Agent Orange are all young adults under the age of 40, but remain about the size of 8 or 9-year-old children, so they are often referred to as ''children'' by their parents and caretakers. Most of them have atrophied, skeletal limbs that are severely twisted, leaving them bedridden and in need of round the clock care.

Some are blind, others are deaf, or both. One 25-year-old woman who sits cross-legged on a bed like a 10-year-old schoolgirl, can see and hear, but is oblivious to touch and her surroundings. She has fits of laughter all day. Her brother's twisted body is paralyzed from the neck down, but he can interact with others by grimacing or smiling. All of these ''children'' here have physical and cognitive disabilities.

Phan Thanh Tien, vice president of the Danang Association for Victims of Agent Orange, has brought me to this House of Solace and acts as my ad hoc interpreter. 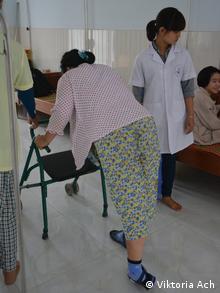 Tien An, 37, is one of two disabled adults who can stand. She painstakingly shuffles one foot in front of the other with the aid of a walker. One club foot makes her slightly twisted left leg appear a bit shorter than the right one.

Besides being able to see and hear, she is the only one here capable of speech. She looks at me curiously and speaks very softly and slowly. Tien An is getting physiotherapy now, but one wonders if it's worth the effort since her condition is expected to get worse, much worse. In a few years, she's likely to share the same fate as her 40-year-old brother.

''She sees her brother. She knows that's her future,'' says Phan, translating their aunt's Vietnamese into English.

Agent Orange to blame for disabilities

Tien An's brother is propped up sideways on a bed. He is motionless and looks at me without seeing. He is blind. The siblings had been born healthy, but in their teens, they both started to experience the gradual loss of motor skills.

''Before he could ride a motorbike. They could go to school and studied well, but when he was 16, he started talking slowly. Everything became slow and after that he couldn't sit and walk. Now he is blind, bedridden,“ explains Phan.

I ask what caused this progressive damage to the brain and central nervous system.

The aunt tells Phan that Agent Orange is the culprit. Why the effects of the herbicide were manifested later in life and not at birth, is unknown. 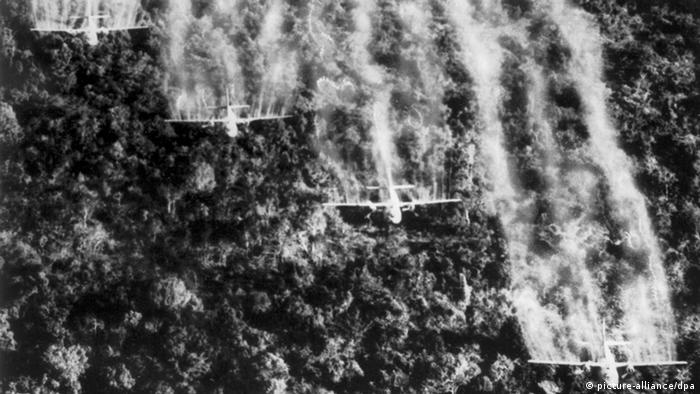 The US had sprayed 20 million gallons of herbicides over South Vietnam exposing up to 4.8 million people to toxic chemicals

Flashback to a half century ago and today's Danang International Airport was a US air base where a chemical war was launched against an invisible enemy. Viet Cong insurgents had used the dense tropical foliage in the jungles of central and south Vietnam as cover to spring surprise attacks on American troops.

Danang lies south of the 17th parallel that had once separated the Communist North from the US-backed South Vietnamese government. The US had sprayed 20 million gallons of herbicides in former South Vietnam, exposing up to 4.8 million people to the toxic chemicals, according to a 2003 Columbia University study.

Dioxin byproduct is the killer

Danang is where barrels of Agent Orange, the most lethal weed killer, had been stored. Accidental spillage got into the soil and water, entering the food chain and making Danang one of Vietnam's most heavily contaminated hot spots.

Agent Orange is so deadly to humans because of its dioxin byproduct, which is easily absorbed by fatty tissue through eating contaminated food. It's got ahalf-life of up to 11 years in the human body. Dioxin's chemical stability means it can also linger in the soil for decades.

Vietnamese researchers say pregnant women in hot spot regions suffered disproportionately more miscarriages, stillbirths and monstrous live births. Babies were born with misshapen heads and partial brains, missing eyes and limbs, as well as more common birth anomolies such as spina bifida, a neural tube defect, which is also linked to a lack of folic acid in the maternal diet.

It's unclear if dioxin is transmitted to the foetus during pregnancy or whether epigenetic damage has been passed on by a father exposed to Agent Orange during the war. 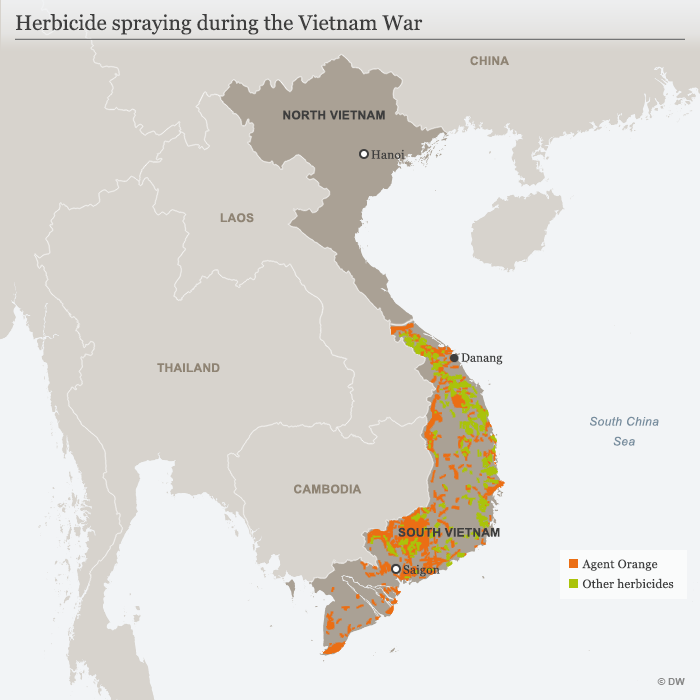 A thorn in US-Vietnam relations

The Vietnamese are convinced that Agent Orange causes birth defects, but the Americans say no definitive epidemiological study has proven this link.

''We know Agent Orange herbicide was used in Vietnam heavily. We have evidence that these hot spots are highly contaminated. We know dioxin is the most toxic chemical known to human beings and causes all kinds of health problems. We know that Vietnamese were exposed to that. What else do we need to know?" asks Thao Griffiths, the Vietnamese country director for Vietnam Veterans of America Foundation, an NGO that addresses the legacies of the Vietnam War, including the health consequences of Agent Orange.

For decades, Agent Orange has been a thorn in the bilateral relationship between the US and Vietnam. But Griffiths concedes that the US has recently allocated $21 million (18 million euros) in aid for all disabled people living in contaminated areas, regardless of what caused the disability. It was a humanitarian gesture, but also a tacit acknowledgement that Agent Orange could have been responsible for at least some birth defects. 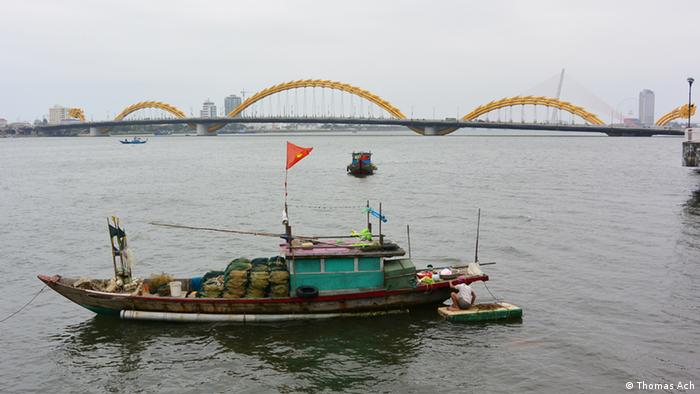 US offers aid without admitting liability

''Finally they find that one angle they can agree on rather than arguing with each other on the science of cause and effect, because God knows," Griffiths adds. "You go to Danang and you see how people suffer. They live in poor conditions. The need is now."

The US is helping Vietnam to clean up Danang right now. Congress has also appropriated over $100 million to date in US aid and technology to burn dioxin, a project that is due for completion by year's end. Removing the last vestiges of Agent Orange from the environment would hopefully mean far fewer birth defects and disabilities for generations to come.

Agent Orange and its Vietnamese legacy

Four decades after the end of the Vietnam War, the US has strengthened ties with its former enemy, but some say the conflict lives on through the toxic defoliant Agent Orange, which is crippling innocent young lives. (28.04.2015)

The Vietnam War displayed the limits of US military power - 58,000 Americans died, millions of Vietnamese were killed. Decades later, the US is again trying to extract itself from costly wars. Spencer Kimball reports. (30.04.2015)

The curse of Agent Orange, report from Danang