The Vietnam War displayed the limits of US military power - 58,000 Americans died, millions of Vietnamese were killed. Decades later, the US is again trying to extract itself from costly wars. Spencer Kimball reports. 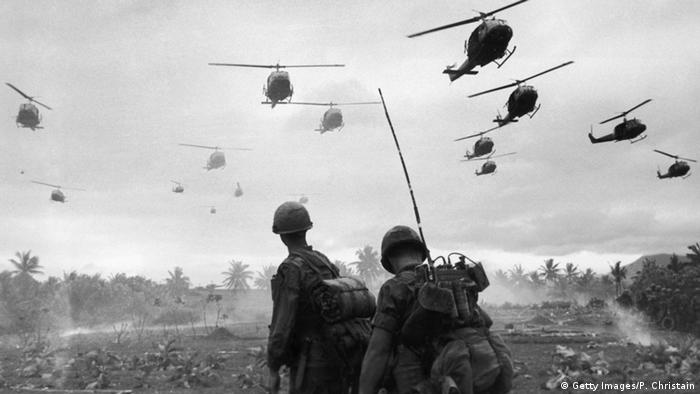 He had volunteered for the US Army in 1966 at the age of 19, right out of high school. Guided by an uncritical national pride inherited from America's victory over fascism in World War Two, Riley had originally believed that the US intervention in Vietnam was also a just war, this time against the threat posed by communism.

Riley wanted to be a helicopter pilot, but his depth perception was bad. So instead he became an Army wireman, helping to build communications infrastructure for the military throughout South Vietnam. When he first arrived in the region, he saw poverty and thought the US could help.

But the reality on the ground wasn't black and white. It was confusing. Riley increasingly questioned the US mission. He saw the suffering of the Vietnamese people, their homeland ravaged by war, and wondered whether America really was doing good.

"With all the damage that we were doing, it bothered me," Riley told DW. "We were destroying their land. 'What are they going to have when we leave?' That's the thought I used to have."

But above all, he lost his friends. Seven of Riley's high school buddies from Clermont County, Ohio perished in the war. As he watched television images of the North Vietnamese overrunning Saigon on April 30, 1975, he was overcome by anger and grief for all that had been lost. 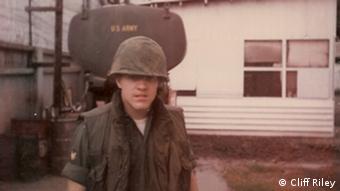 Riley: 'What were we doing there?'

"I was balling, I was crying, I was sobbing my eyes out," said Riley. "I was yelling, 'Why? What was it all for? My friends were killed. And for what?'"

Why did Johnson choose war?

Forty years after the fall of Saigon, nobody has been able to conclusively answer what Riley's friends died for. America's 36th president, Lyndon Baines Johnson, stands at the center of this mystery.

Johnson was a Texan, a liberal Democrat, and a reformer who supported social and racial equality in America. But his progressive domestic policies contrasted with his aggressive foreign policy. In 1965, Johnson pursued military escalation in Vietnam. He transformed an advisory mission into a war that saw 500,000 US troops deployed at its height.

"On the one hand, he felt that the US had an obligation to support South Vietnam," Miller said. "The US had at that point been heavily involved in Vietnamese affairs for 15 years. On the other hand, it's very clear that Lyndon Johnson was very worried about the Vietnam War."

Some scholars believe that Johnson was a dyed-in-the-wool cold warrior who believed in the domino theory, which assumed that communism would spread like wildfire, if South Vietnam fell to the North.

Others have argued that Johnson chose war out of domestic political considerations. As a liberal president pursuing a progressive domestic agenda, he feared an attack from the right for being soft on communism. A decade earlier, Republican Senator Joe McCarthy had destroyed liberal adversaries by accusing them of being communist sympathizers.

Today, many historians believe Johnson's personality was the most important factor in his decision to send combat troops to Vietnam. He was an insecure man who needed to look tough in the public eye.

"Johnson was a very complicated man, and there's considerable evidence that he had this fear of being seen as weak," Miller said. "He didn't believe he could be an effective president if he was seen as weak and he frequently said, 'I will not be the first president to lose a war.'"

With Johnson's war came the draft. Ken Williamson was a photography student at Ohio University when the US intervention in Vietnam was escalating. He initially received a deferment to complete his studies. The campus buzzed with discussion about whether the war was just, as students worried about their fate after graduation. During his college years, Williamson began to research the war and came to oppose it.

"We're involved in a civil war in Vietnam that I didn't think we had any business being there for," Williamson told DW. 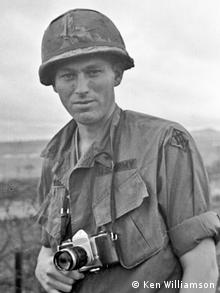 Williamson says the US lied about what was happening

After graduation and a stint as a civilian employee at the Defense Intelligence Agency, Williamson ran out of options. He was drafted into the Army in 1968 and assigned to work as a photographer, documenting the work of military engineers as they built infrastructure in Vietnam. Though other opponents of the war had talked about fleeing to Canada, Williamson felt he had an obligation to serve. But his intuition told him that the truth about the war was being kept from the public.

"The US government really lied to the country about what was happening," said Williamson, who's now 72 and author of the forthcoming book "Saying Goodbye to Vietnam," a collection of his photographs from his tour of duty in 1969. "It was more of a feeling I had than knowledge. Today, we can prove that's true in a number of areas, like Agent Orange for example."

The US military sprayed 20 million gallons of Agent Orange to defoliate the dense jungles of Vietnam in a campaign to deprive the communist insurgency of its sanctuary. Agent Orange contains a dioxin that's highly poisonous. For years, the US government did not acknowledge a connection between exposure to that dioxin and health problems faced by returning veterans, such as Cliff Riley.

"The dioxin were making a lot of us sick," said Riley, who's now 69 and president of the Buckeye State Council Vietnam Veterans of America. "If you looked at the people who were exposed to dioxin, they have a higher chance of getting these diseases: Prostate cancer, lung cancer, Parkinson's disease - there are 16 cancers."

Riley had two heart attacks by the time he was 40. His wife had a miscarriage. He had kidney, bladder and gallbladder problems; he was diagnosed with colon cancer, and he now has diabetes. His son was born with dyslexia and hip dysplasia among other conditions. Only with the passage of the Agent Orange Act in 1991 did the government begin acknowledging and compensating veterans for illnesses related to dioxin exposure. 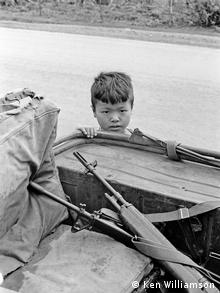 The Agent Orange legacy is still being felt in Vietnam

"It's 10 times worse for the Vietnamese because they're living with it in their ground, in their water supply," Williamson said. "The whole country is saturated with it. They have more cancers over there and birth defects than we do. We also know now that it affects up to seven generations of our families."

The horrors of the war and the US defeat were so traumatizing that some Americans believed their country suffered from a "Vietnam syndrome."

"The idea was that because the Vietnam War had been such a disaster, because it had been so unpopular, American leaders were now very reluctant to use force overseas," said Edward Miller, a professor of history at Dartmouth University.

But not everyone sees the Vietnam tragedy as a cautionary tale of the limits of US military power.

In the aftermath of the September 11, 2001 terrorist attacks, the Bush administration invaded Afghanistan and Iraq, pursuing ambitious nation building programs in the midst of insurgencies. Both conflicts have been inconclusive at best. The war in Afghanistan is now the longest conflict in US history, not Vietnam.

"Vietnam remains the reference point for American debate," Miller said. "Whenever there's a debate about what the US should do in Iraq and Afghanistan or with ISIS or anything like that, Vietnam is always the first reference point."

Remembering the fall of Saigon