In Serbia, migrant children left to fend for themselves on Belgrade′s streets | Europe | News and current affairs from around the continent | DW | 01.01.2021

In Serbia, migrant children left to fend for themselves on Belgrade's streets 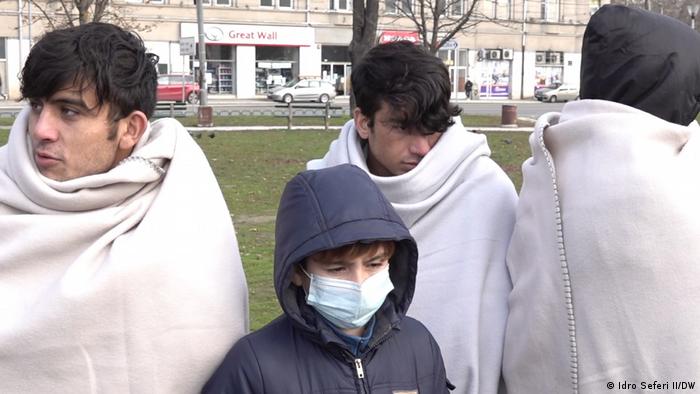 A freezing wind blows through the streets of Belgrade as the residents of the Serbian capital prepare for the Orthodox Christmas on January 7. The stores are open despite coronavirus pandemic restrictions. Wrapped in thick coats, people saunter along the shopping streets or the new promenade on the banks of the Sava River.

Things are quite different by the long-distance bus terminal on Zeleznicka Street, on the edge of downtown Belgrade. A group of children and teenagers hang out in a small park opposite the terminal, all of them refugees, unaccompanied minors aged 11 to 17, and most of them from Afghanistan.

Some of the youngsters huddle under white blankets. "I bought them at the market across the street," Sherkat said, his feet in sneakers with short socks. Some of the young people shiver from the cold, and fatigue is written all over their faces. They are waiting for a chance to continue their journey, to the Hungarian or Croatian border.

Sherkat managed to get out of Serbia once. The situation on the EU side of the border was bad, he said. "In Croatia, the police stole my cell phone and sent me back." The situation in the refugee camps in Serbia was difficult, he said, adding that since he did not have a registration card from the Serbian authorities, he had no access at all to aid. 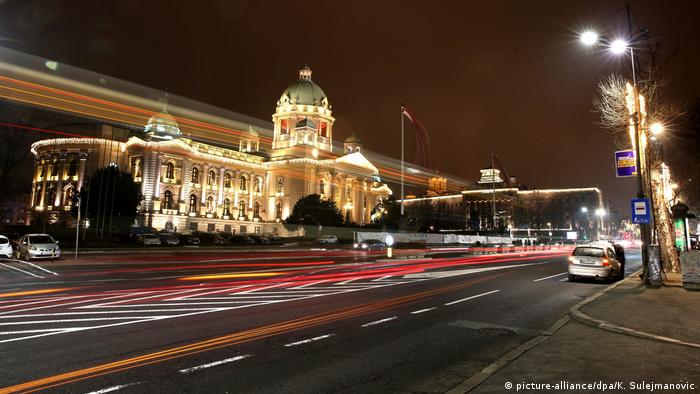 As the city of Belgrade readies for Othodox Christmas, many young migrants are left out in the cold

Children stay away from government agencies

It is a problem familiar to Bogdan Krasic, who works for nongovernmental organization Save the Children International. "These children are on their way to other countries, they don't want to stay in Serbia," he said. Some children live in the official camps for asylum-seekers, but many live outside the camps, he added. "It is not easy to help the young people because they do not want to register," Krasic said. "They want to go to western Europe and avoid aid organizations and the police."

Sherkat and his friends bunk in a construction site opposite the park, next to the lavishly renovated river promenade where investment projects worth billions are being built — shopping centers, hotels and office buildings. The construction site is deserted, but empty bottles and cans, mattresses and thin polyester blankets mark the spot where the boys camp out. It turns out Sherkat and a few other migrants took a bus to the Serbian town of Backa Palanka on the Croatian border in yet another effort to move on. 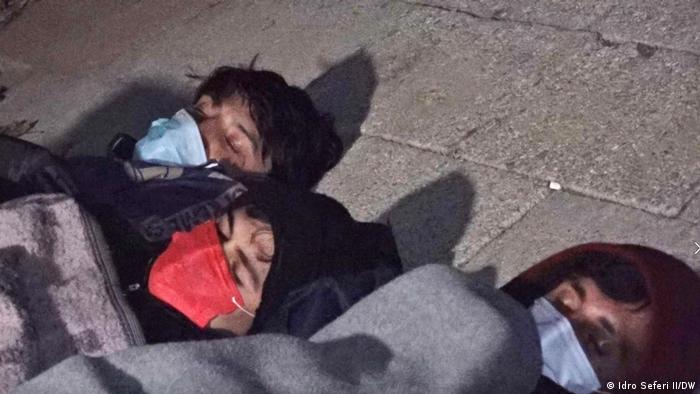 Unaccompanied minors are often forced to sleep on the ground

Rizvanullah and Ekram also want to move on as quickly as possible. The teenagers from Afghanistan — who assure us they are 15 years old — and two other boys spend the nights on the river promenade, wrapped in jackets and sleeping bags, but cold nevertheless. They do not have mattresses, so they spread out a thin plastic trash bag on the rocky ground.

Rizvanullah wants to go to France, where he has relatives. He previously spent three-and-a-half years working in Turkey, but was not paid, so he moved on to Greece. "The Greek police beat me up and sent me back to Turkey," he said. He made it to Belgrade via North Macedonia.

'They didn't believe I'm a minor'

Rizvanullah and Ekram have been in the Serbian capital 10 days. Rizvanullah would prefer to live in a camp for underage migrants, but has run into problems. "I'm 15 years old and I've already been to the camps in Obrenovac, Sid and Adasevci. They didn't believe that I am a minor, they said I had to go to a camp for adults. They didn't give me a card or papers." 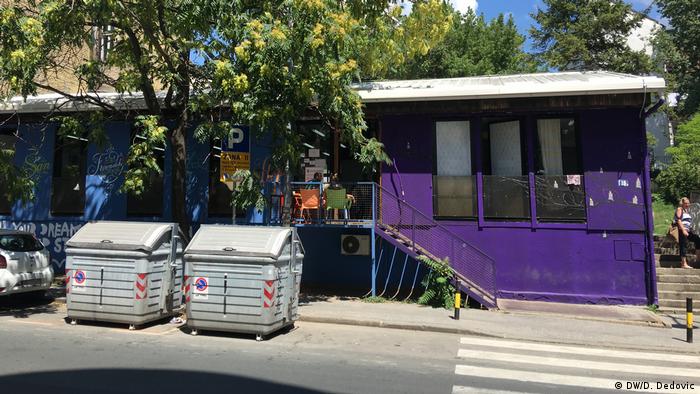 The Miksaliste refugee camp in Belgrade in June 2018

Their stories are not unusual. Many minors travel from Turkey via Greece to the Western Balkans. In 2015 and 2016, there was great public interest in the so-called Balkan route, with aid organizations offering food and medical supplies. There was also more transparency, the agencies knew approximately how many people were in what place at a certain time.

Those times are a thing of the past despite the fact that there still is significant traffic on the Balkan route. The conditions that refugees face in Turkey and in Greece have led to a significant increase in migration on the route from Greece to Croatia and Hungary.

A study by Save the Children's Balkan Migration and Displacement Hub found that although the children travel alone, they are controlled by smugglers throughout. "They speak of a 'kachakbar,' a kind of chief smuggler based in Afghanistan who is in touch with local smugglers," said Katarina Jovanovic, a psychologist and researcher who interviewed 40 underage and unaccompanied refugees on the streets of Belgrade with her team for the study. 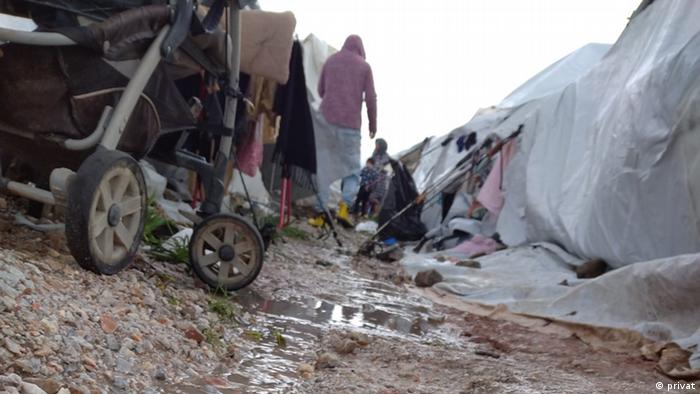 Parents try to stay in touch

Usually the parents would approach the kachakbar to send their eldest son on the journey to western Europe, she said, adding the trip would put them in debt. "People think the parents just let their children go and then forget about it, but they don't. They try to maintain a certain level of control," Jovanovic said.

On the journey west, local smugglers, informed by the kachakbar in Afghanistan, get in touch with the children. Access to cash is also in the hands of local smugglers. "Most children hardly have any cash, they know it's dangerous. Depending on the arrangement the parents have made, the smugglers on the ground give them small amounts of cash," said Jovanovic. The children are in touch with their parents at least some of the time — the smugglers give them money for phone cards, but they control what the young migrants tell their parents. 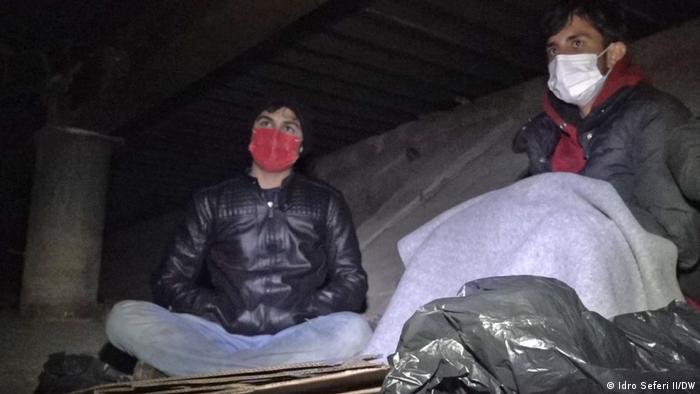 At night, the young migrants in Belgrade hide from the police

In many cases, the children experience violence and abuse, sometimes even sexual abuse. But they won't mention any of that to their parents, Jovanovic said. "They don't want to worry their parents, they feel they must be strong and grow up."

"There is a system that protects the children sometimes, but in most cases it doesn't, and the children experience terrible things," Jovanovic said, adding there is no official aid for the young migrants. The coronavirus pandemic spelled the end for whatever aid groups were looking after unaccompanied minors on the Balkan route. 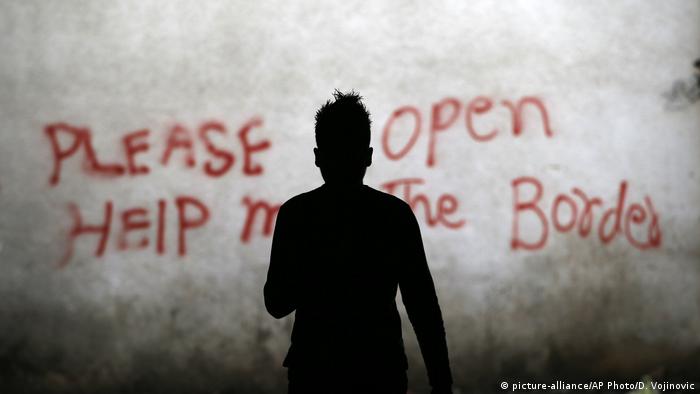 A migrant stands in an abandoned storehouse in Belgrade in 2018

No reliable data on migration

In addition, there are no reliable figures on the current state of migration. "We see big discrepancies in the figures the UNHCR publishes at the national and regional levels," Krasic said "We see children coming from Greece, so we suspect that their numbers are similar in the other countries on the Balkan route. But the UNHCR figures do not reflect that." Save the Children does not know how many children were actually traveling in 2020, he said.

Less reliable data on migration is part of the Balkan route countries' refugee policy, Jovanovic argued, adding that only once did the authorities let her and her team talk to children, and that was back in 2018 for the study.

Currently no one bothers, she said — not UNICEF nor the UNHCR or the International Red Cross. "We don't really have access to data anymore, or it comes sporadically and is not translated into English. You can clearly see that the information policy has changed," she said.