Germany resumes deportations to Afghanistan despite COVID | Germany | News and in-depth reporting from Berlin and beyond | DW | 16.12.2020

Germany is resuming deportations of rejected asylum-seekers to Afghanistan, which had been suspended with the first wave of coronavirus in March. The move has triggered fierce criticism. 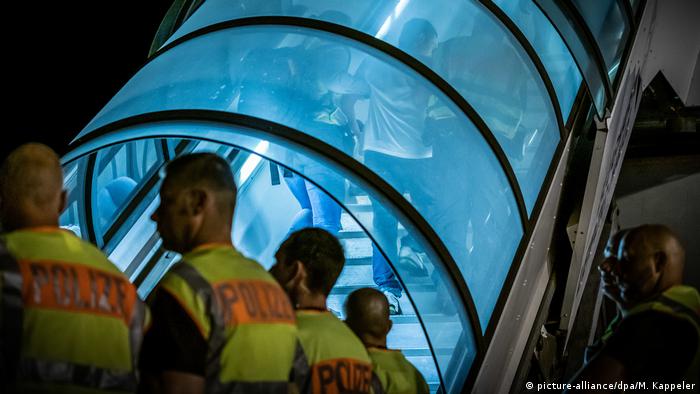 There is high security around every deportation flight

Around 40 rejected asylum-seekers from Afghanistan have arrived in Kabul, according to Afghanistan's Refugee Affairs Ministry.

Among them is a 21-year-old whom the German refugee organization Flüchtlingsrat Berlin describes as a heavily traumatized individual. The young Afghan was in a German prison for various petty crimes and was due to be released in January. "We don't want to belittle his crimes," the organization writes in a press statement. "But we think it is irresponsible of Germany — at a time of an international pandemic — to rid itself of an individual who came to Berlin as an underage refugee, after having suffered traumatizing events in his childhood."

Several German refugee NGOs had sounded alarms over Wednesday's planned deportation flight from Leipzig/Halle airport. The last deportation from Germany to Afghanistan was on March 11, just before the government in Kabul asked for a freeze, as it was struggling to cope with the first wave of the coronavirus pandemic.

'Deportees face threats to their lives'

Afghanistan is one of the most dangerous countries in the world. Over the past 10 years, over 100,000 civilians have lost their lives there. The Afghan government and the militant Islamist Taliban are currently in peace talks.But violence has increased markedly this year, with the deputy governor of Kabul and a renowned journalist among the most recent casualties.

German opposition politicians have vehemently opposed the resumption of deportations. "The many attacks Afghanistan sees every day forbid deportations there. The deportees face threats to their lives," said Green Party MP Claudia Roth.

Günter Burkhardt, executive of the refugee organization Pro Asyl, has called for the planned deportations to be halted immediately. "It is completely irresponsible to go ahead with such plans at a time when the whole country goes into a nationwide lockdown," he said. Infection rates in Afghanistan are also high, constituting a threat to the deportees' safety, the organization points out.

"Violence has increased on a very high level and I call on nations who have taken in Afghan refugees to adhere to international humanitarian and human rights standards when dealing with asylum-seekers," Sima Samar, minister for human rights in the Kabul government, told DW.

Why the Afghan government agreed to accept the deportees now in the middle of the COVID-19 pandemic is unclear. Afghanistan analyst Thomas Ruttig, with the Tony Blair Institute for Global Ideas, suspects a link to the Afghanistan donors' conference that was held on November 23 and 24 in Geneva, Switzerland. There all participating countries signed a final document committing themselves to facilitate the return of rejected Afghan asylum-seekers.

Pro Asyl says it has learned that several individuals who had been scheduled for the deportation flight got German courts to halt procedures, pointing to the security situation as well as the pandemic, which would make it impossible for the returnees to be able to earn a living in the war-torn country.

The German Interior Ministry has also confirmed that the Afghan government has demanded all asylum-seekers test negative for the coronavirus before being deported. There has been no information on regulations on the protection measures for accompanying security personnel.

Germany is not the only country to resume deportations to Afghanistan. Earlier this week there were also reports of deportation flights from Austria and Bulgaria.

What are Germany's deportations rules?

Germany's Interior Ministry says a ban on deporting Syrians will not get extended. Critics see this as a violation of international law protecting refugees. Here is a look at the legal backdrop.

They escaped conflict in Afghanistan, but now with no path to citizenship, and their livelihoods wrecked by coronavirus lockdowns, many Muslim Afghans see no future in India.