Afghan aid: Why the peace talks condition suits the Taliban | Asia | An in-depth look at news from across the continent | DW | 25.11.2020 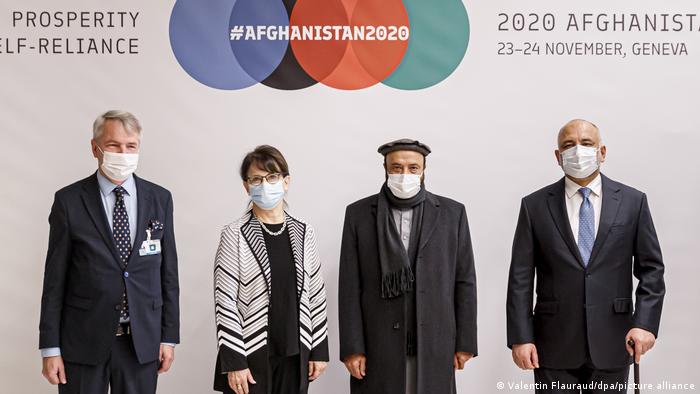 Some 70 countries on Tuesday pledged $12 billion (€10.1 billion) in assistance to Afghanistan at a donor conference in Geneva, Switzerland. It is a substantial sum for the war-torn country, which depends on foreign aid to survive.

But there are some strings attached to this international aid – the most crucial being the Afghan government's commitment to ongoing peace negotiations with the Taliban militant group.

To secure the financial aid, Afghan authorities need to ensure that the talks taking place in Qatar's capital Doha with the Taliban yield results. However, it does not depend entirely on them; the Taliban have so far proven to be a difficult stakeholder and have not agreed to a nationwide truce to make the talks successful.

The insurgent group, which ruled the country from 1996 up to the US invasion of Afghanistan in 2001, controls vast swaths of territory in Afghanistan. They also feel emboldened by US President Donald Trump's decision to withdraw more troops from the war-ravaged country by mid-January 2021.

Read more: Pompeo meets with Taliban negotiators in Qatar ahead of US troop withdrawal

Therefore, the peace talks condition imposed by donor countries in Geneva could increase pressure on President Ashraf Ghani's government to give more concessions to Islamists. After all, it is the Afghan government that needs the international money, not the Taliban.

"It sends out an important message to Afghanistan, and the message is that the international community has not abandoned the country, even when it is facing financial problems due to the coronavirus pandemic," Zadran told DW.

"There is another clear message for the Afghan government and the Taliban: The peace process must make progress, and there must be a positive outcome as soon as possible," he added.

The Doha talks, however, are a complicated affair, with no guarantee of success.

Leverage for the Taliban

After a delay of six months, intra-Afghan talks started in September as a result of the landmark US-Taliban deal on February 29. The Afghan government and insurgents had sparred over the modalities of a countrywide ceasefire and the release of Taliban prisoners. At the same time, the Taliban continued to attack Afghan forces to maintain pressure on President Ghani's government.

"The Afghan government side will come to the table seeking a ceasefire. It is a wish that has the support across the Afghan political class as well as in Washington, and one that can help build trust and strengthen peace prospects if agreed to by the Taliban," Kugelman told DW. "The Taliban, however, will be in no hurry to agree to a ceasefire, given that it derives so much leverage from violence."

The financial aid conditions and the imminent US troop withdrawal is likely to increase the Taliban's leverage on Kabul.

Countries participating in the donor conference have other conditions for Afghanistan as well; most importantly that all parties to the Afghan conflict must respect human rights.

"The Afghan government welcomes the conditions set for the international aid, which includes women's rights and the freedom of speech and media. We also welcome that the international community once again expressed its support for an Afghan-led peace process and condemned the ongoing violence," Deputy Finance Minister Zadran said.

It is unclear whether the Taliban would agree to protecting human rights and freedom of speech in Afghanistan. Concerns are high that gains made in the past two decades, especially in the area of women's rights, could be lost as the Taliban unleash further violence.

Donor countries are also wary of the rampant corruption in Afghanistan and have demanded reforms. Maiwand Rohani, the executive director of the Joint Anti-Corruption Monitoring and Evaluation Committee organization, told DW that the condition to fighting corruption and the enforcement of law will increase pressure on Afghan authorities because Kabul in the past had failed to address these issues.

"We have to see if Kabul takes a new approach this time," Rohani said.

The expert is also of the view that the international community needs to take some responsibility for the corruption in Afghanistan. "Some of the blame for spending the aid money insufficiently goes to donor countries and organizations. The way the money is spent in the country needs to be changed," he said.