A donor conference for Afghanistan has collected pledges to the tune of $12 billion from the international community. Much of the money was made conditional on the country's commitment to an ongoing peace process. 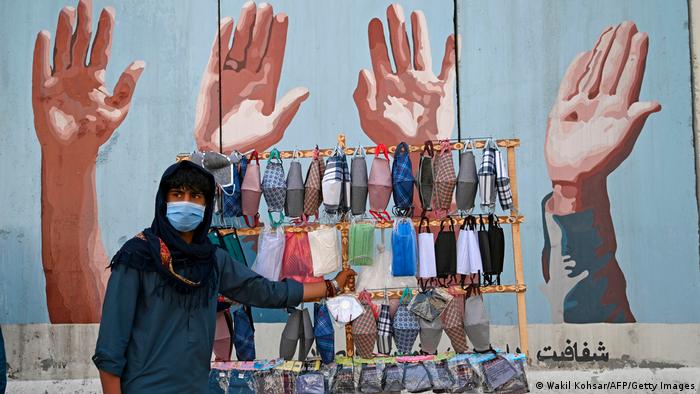 Ministers from some 70 countries attending a donor conference for Afghanistan on Tuesday pledged $12 billion (€10.1 billion) in assistance to the war-torn country over the next four years.

The amount is a drop of some $3 billion compared to the pledges made for a four-year period at a similar conference in Brussels in 2016.

In a speech on Tuesday, Afghan President Ashraf Ghani urged international allies to maintain their levels of aid to his country, saying that previous funds had helped to increase women's education, improve electricity supplies and decrease infant mortality.

"Any precipitous reduction in grant support over the next few years will lead to major setbacks in public services, economic activity and living standards. This is important not only for development but also for peace," Ghani said on the second day of a donor conference in Geneva.

Ahead of the conference, there had been concern that donor countries might be less generous this year as most economies around the world struggle to cope with fallout from the coronavirus pandemic.

How much have countries pledged?

In all, the donor countries pledged $3 billion (€2.52 billion) for 2021 and around $12 billion over four years, according to the conference's co-chair, Finnish Development Minister Ville Skinnari.

Germany pledged €430 million ($510 million) in civilian assistance next year and through to 2024 provided Afghanistan shows it is committed to the peace process, among other conditions.

The United States pledged $600 million in civilian aid to Afghanistan for 2021, but made half of it conditional on progress in peace talks.

Afghanistan still heavily relies on outside funding, despite 19 years of promised reforms and attempts to grow the economy after the US ousted the Taliban in 2001.

The donor conference took place as the ongoing peace talks between Afghanistan and the Taliban have hit a standstill.

Filippo Grandi, the United Nations High Commissioner for Refugees (UNHCR), has said the future of millions of Afghans depends on the outcome of the peace talks in Qatar and the donors' conference.

"Failure on either account would see Afghanistan slide backwards with disastrous consequences, including further displacement possibly on a large scale," he said in a statement.

Who was at the donor meeting?

In addition to ministers from about 70 countries, the conference was also attended by humanitarian organizations.

The Taliban was not invited to the conference in Geneva. The Islamist group said donors should continue humanitarian assistance, but accused the Afghan government of keeping aid money for themselves.

What are their positions?

The decision by US President Donald Trump to reduce American forces in the country from 4,500-strong to 2,500 by mid-January has made donors uneasy about whether the Taliban could exert more influence. Germany urged the international community "not to turn their backs on Afghanistan."

Ross Wilson, US charge d'affaires to Afghanistan, said the US would support Afghanistan "as it moves towards self-reliance, building on the achievements and investments of the last nineteen years" in a tweet released on Monday.

What happened at the previous conference?

At the 2016 conference in Brussels, donors pledged $15.2 billion to Afghanistan between 2017 and 2020. The EU and its member states committed $5.6 billion of that amount.

The European Council called it "an exceptional level of funding which ensures that Afghanistan will remain on a firm path to political and economic stability, state-building and development."

Donor nations meet every four years to pledge aid to Afghanistan, which is almost entirely reliant on foreign assistance.

Concerns are high that gains made in the past two decades, especially in the area of women's rights, could be lost as the Taliban unleashes further violence.

The Taliban and Afghan government have been engaged in peace talks in Qatar since September 12 but no progress has been announced so far.

Statistics in Afghanistan are still grim after decades of international help. The poverty level during the pandemic has shot up to 70% -- up from 54% last year.

Despite billions of dollars that have poured into the country in the last two decades, more than half the population lives on $1.14 a day.