Pompeo meets with Taliban negotiators in Qatar ahead of US troop withdrawal | News | DW | 21.11.2020 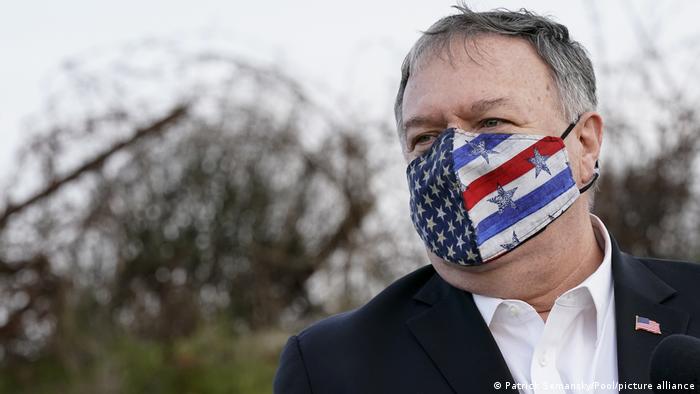 US Secretary of State Mike Pompeo met with negotiators from both the Afghan government and the Taliban during his visit to Qatar’s capital, Doha, on Saturday.

The meeting comes as President Donald Trump’s administration looks to speed up the withdrawal of American troops from Afghanistan during the last days of his presidential term, which ends with President-elect Joe Biden’s inauguration on January 20.

The US military announced on Tuesday that Trump would reduce the number of US troops in Afghanistan by 2,000 by January 15, leaving just 2,500 in the country. While the Taliban have welcomed this news, NATO allies believe that a hasty exit could hinder the peace process.

Also on Saturday, a senior Afghan official said the Afghan government and Taliban are "very close" to breaking a deadlock in peace talks, but said that US military presence in the country was still necessary. Talks began in Doha on September 12, but there were soon issues over agenda disagreements, the basic framework discussions and religious interpretations.

Biden, in a rare point of agreement, also advocates winding down the Afghanistan war although analysts believe he will not be as wedded to a quick timetable.

Peace talks between the Taliban and the Afghan government were expected to start in March after the US and the group signed a landmark agreement in Qatar, the Taliban's base for diplomacy, on February 29.

However, the Afghan government and insurgents sparred over the modalities of a countrywide ceasefire and the release of Taliban prisoners, which delayed the dialogue until September.

Pompeo is currently on a tour of seven countries in Europe and the Middle East. He was also scheduled to see the Gulf state's ruler, Emir Sheikh Tamim bin Hamad Al-Thani, and the foreign minister in Doha.

His meeting in Doha coincided with a large-scale shelling in Kabul, leaving at least eight people dead and wounding 31 others.

In the past six months, the Taliban carried out 53 suicide attacks and 1,250 explosions that left 1,210 civilians dead and 2,500 wounded, interior ministry spokesman Tariq Arian said this week.