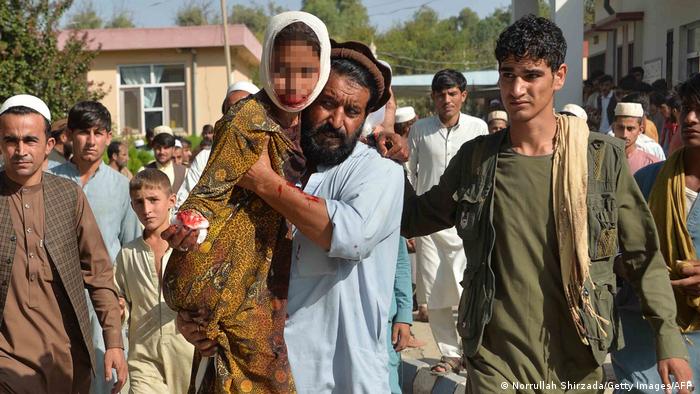 At least 13 people, mostly civilians, were killed Saturday in a vehicle bomb attack that targeted an Afghan government building in the Ghani Khel district of the eastern Nangarhar province.

Attaullah Khogyani, a spokesman for Nangarhar governor, told the AFP news agency that it was a suicide attack. The bomber detonated an explosives-laden truck at the entrance of a government building that also housed some military facilities.

"As a result, 13 civilians including one woman and four children were killed. Two members of security forces were also killed," Khogyani said.

At least 40 people, including four Afghan security officials, were wounded in the attack, he said, adding that several armed attackers, who tried to enter the building after the assault, were killed by security forces.

No militant group immediately claimed responsibility for the attack, but some eyewitnesses blamed the Taliban insurgent group for it.

Violent attacks in Afghanistan have spiked in the past few months despite ongoing peace negotiations between government representatives and Taliban negotiators in Qatar.

A roadside blast in central Afghanistan on Tuesday killed at least 14 civilians, mostly women and children, according to the interior ministry.

Taliban agreed to engage in an intra-Afghan dialogue in September, however, they have so far refused to agree to a ceasefire.

The talks were expected to start in March after the US and the Taliban signed a landmark agreement in Qatar on February 29. But the Afghan government and insurgents sparred over the modalities of a countrywide ceasefire and the release of Taliban prisoners, which delayed the dialogue for six months.

At the same time, the Taliban continued to attack Afghan forces to maintain pressure on President Ashraf Ghani's government.

"The Afghan talks [in Doha] could only yield results if both sides agree to make concessions. Agreeing to a ceasefire will be a good start from the Taliban," Sima Samar, the former head of Afghanistan's Human Rights Commission, told DW.

But Michael Kugelman, a South Asia expert at the Washington-based Woodrow Wilson Center for Scholars, believes that the Taliban would not easily agree to a truce.

"The Afghan government side comes to the table seeking a ceasefire. It is a wish that has the support across the Afghan political class as well as in Washington, and one that can help build trust and strengthen peace prospects if agreed to by the Taliban," Kugelman told DW. "The Taliban, however, will be in no hurry to agree to a ceasefire, given that it derives so much leverage from violence. The ceasefire issue is a clear disconnect that will be an early challenge in the intra-Afghan dialogue."

President Ashraf Ghani's government has also stepped up security operations against the Taliban. According to a tweet by the Ministry of Interior, Afghan forces killed a key member of the Taliban and arrested five others on Friday night in northern Balkh province.

The interior ministry said that at least 210 civilians had been killed and injured in at least 650 Taliban attacks over the past two weeks.

The United Nation's Assistance Mission in Afghanistan (UNAMA) has documented at least 1,280 civilian deaths and 2,176 wounded in the first half of 2020.

US cancels Taliban talks over reversal on girls' education 26.03.2022

The US has canceled Doha talks with the Taliban after the rulers of Afghanistan backtracked on allowing girls to attend secondary school. Nobel laureate Malala Yousafzai predicted that the curbs would not endure.

The weekend summit in Qatar will be the first face-to-face meeting between the two sides since the US withdrawal from Afghanistan.