A suicide bomber has struck at an army base, killing dozens of security personnel. Violence has surged in Afghanistan since the start of peace talks between the government and the Taliban in September. 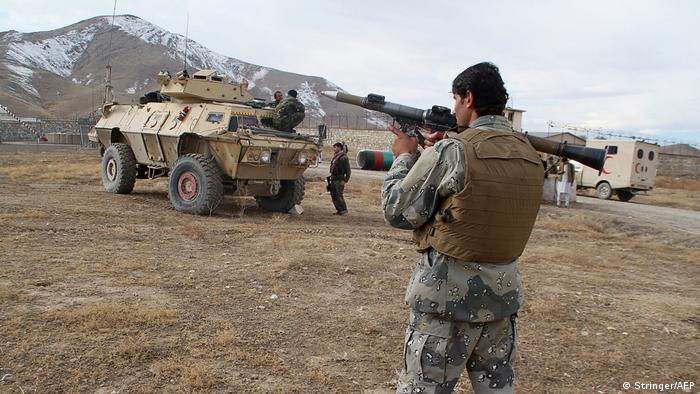 At least 30 people died when a suicide car bomber struck an army base in the Afghan province of Ghazni on Sunday.

"We have received 26 bodies and 17 wounded so far. All of them are security personnel," Baz Mohammad Hemat, director of Ghazni hospital, told AFP news agency. The death toll has reportedly risen after Hemat's initial tally.

A security source said the bomber detonated "a Humvee vehicle which was full of explosives," according to Afghanistan's Tolo News channel.

Tariq Arian, a spokesman for the interior ministry, confirmed that a suicide bomber had detonated a vehicle full of explosives in Ghazni. He, however, did not confirm the death toll.

No group has so far claimed responsibility for the attack, one of the bloodiest in recent months.

Government forces and the Taliban militant group have regularly clashed in Ghazni city for the past few years.

The assaults come just days after two bombs killed 14 people in the city of Bamiyan, which is famous for its ancient Buddhist heritage.

Violence has spiked in the war-ravaged country despite ongoing peace talks between the Afghan government and the Taliban in Doha, Qatar. Armed attacks have killed more than 50 people in Kabul in recent weeks, including two assaults on educational centers and a rocket attack.

Although the "Islamic State" (IS) militant group claimed responsibility for the Kabul attacks, Kabul blamed the Taliban – who deny involvement in recent attacks.

According to United Nations figures, nearly 6,000 Afghans were killed or injured in the first nine months of this year in fighting between government forces and the Taliban.

After a delay of six months, intra-Afghan talks started in September as a result of the landmark US-Taliban deal on February 29. The Afghan government and insurgents had sparred over the modalities of a countrywide ceasefire and the release of Taliban prisoners. At the same time, the Taliban continued to attack Afghan forces to maintain pressure on President Ashraf Ghani's government.

"Both sides need to focus on finding a lasting solution to the two-decade-long Afghan conflict and not rush to a premature peace deal, which could collapse in the future," she added.

The Taliban, who ruled the country from 1996 up to the US invasion of Afghanistan in 2001, controls vast swaths of territory in Afghanistan. They also feel emboldened by US President Donald Trump's decision to withdraw more troops from the war-ravaged country by mid-January 2021.

On Monday, some 70 countries pledged $12 billion (€10 billion) in assistance to Afghanistan at a donor conference in Geneva, Switzerland. Much of the money, however, was made conditional on the country's commitment to an ongoing peace process. Donor countries also urged Afghan stakeholders to protect human rights in the country.

It is unclear whether the Taliban would agree to protect human rights and freedom of speech in Afghanistan. Concerns are high that gains made in the past two decades, especially in the area of women's rights, could be lost as Islamists unleash further violence.