In Guatemala, women fear for their lives

At least 160 women have been killed in the first four months of 2021 in Guatemala — more than one per day. Amid more than 20,000 complaints of violence, few facilities are available for women to get help. 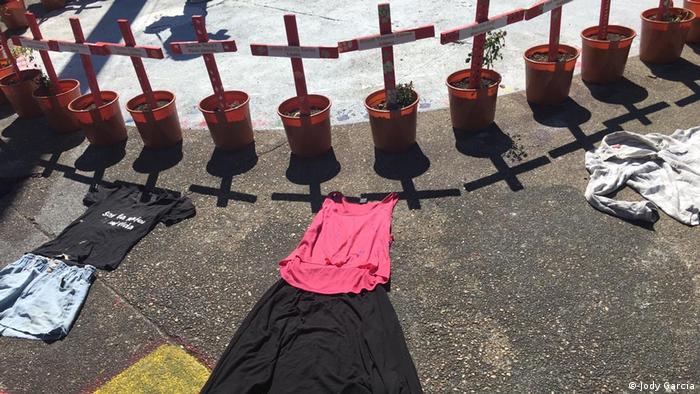 Violence against women hasn't been seen as a serious problem in Guatemala, but protests are growing

Luz Maria had found her dream job. At just 25, she began working at the Guatemalan department of public prosecution. Her main task as a criminologist was to take photographs of victims of violence and the scenes where it had taken place. She always said that her work gave a voice to people who had had their lives stolen from them.

She had her own life stolen from her in mid-January. Garbage collectors found her body, wrapped in plastic, next to a canal in Guatemala City. She was the mother of a 1-year-old.

Since then, her partner has been in pre-trial detention. Neighbors of the couple had regularly heard her screaming loudly when he beat her, but no one thought it necessary to call the police. Instead, they later anonymously sent Maria's mother a recording on which her daughter could be heard pleading for help.

Luz Maria was the latest high-profile victim in a country where just being a woman is a risk factor. The number of women murdered in Guatemala has been hitting record levels amid the restrictions on movement imposed during the coronavirus pandemic. At least one woman has been falling victim to such a murder every day. For many Guatemalan women, mere survival has become a challenge.

Silvia Trujillo was born in Uruguay and grew up in Argentina, but she said she first became a feminist in Guatemala. She moved there 20 years ago and has since worked both as a sociologist and the editor of La Cuerda, an internet portal with a "feminist view on reality," according to its website.

"We live here in a state that is incapable of protecting its women and where the political will to do so is lacking. This is compounded by the way society is so pervaded by machismo that violence against women is often not reported," she said.

This year, there have been 161 femicides and more than 20,000 complaints of violence against women, including almost 3,000 rapes. But the perpetrators don't fear any consequences: Fewer than 3% of sexual offenders end up behind bars, according to statistics from the past few years.

"The message you send to society with this is: 'You can do anything here; there will be no consequences.' And that leads to a culture of impunity that is horrifying," said Trujillo.

But something is starting to change in Guatemala. Many women have had enough of being seen as targets for violence and having to fear for their lives every day. In early March, thousands of Guatemalan women got behind the campaign "Tengo Miedo" ("I am scared") and took to the streets in protest against sexual violence.

"This is more a cemetery than a country," one banner stated. The women called out: "My girlfriends protect me, not the police." But it says quite a lot about Guatemala that one of the initiators of the campaign, who worked in public administration, was fired shortly afterward.

"Here, there is still the sexist attitude that women are not capable of making decisions, for example," said Trujillo. "That is why they earn a quarter less than their male colleagues and why there are just 10 women among the 340 mayors in Guatemala."

Carmen Quintela is another woman who wants to change this state of affairs. Quintela, a Spanish journalist, ended up in Guatemala eight years ago. Today, she is a member of the team running the most important independent news portal in the country, Ocote. The website recently exposed the rape of a woman by two policemen whom she had previously called for help.

"Violence against women is part of everyday life here; it is normal, and no one is surprised when a new femicide comes to light," said Quintela. "Even as young girls, women are just objects that are sexually abused by their uncles, grandfathers or brothers. The result is thousands of teenage pregnancies every year."

Calls for tougher stance on femicide in Germany

But in this extremely Catholic country, even women who have been the victims of rape are forbidden to have an abortion. A bid to amend the law three years ago was vehemently rejected. Abortions, which have always been a taboo topic in Guatemala, continue to be considered a criminal offense; many women end up in prison for years for having had one.

The government has done little to introduce necessary, and long overdue, reforms. A year ago, as one of his first acts in office, President Alejandro Giammattei slashed the budget of the so-called Presidential Secretariat for Women, which is meant to protect women's rights.

The few facilities for women where they can receive psychological and legal assistance after suffering sexual abuse or find temporary shelter are neglected by the government. "The staff there often have to wait months to be paid," said Quintela. "As a consequence, many of them resign. The victims are the ones to suffer. Women in Guatemala who have suffered abuse do not receive the necessary support.

Quintela criticizes the fact that to this day, Guatemala does not consider violence against women to be a social problem. One glaring example: Victims of sexual violence are now able to report their abuse to a hotline, available in four languages. However, in Guatemala that's not nearly enough — 22 languages are spoken in all.