In Greece, women activists sing and dance against oil and gas

As other countries turn away from fossil fuel exploration, Greece is searching for oil and natural gas amid protests. But a global shift to renewables and the pandemic are complicating drilling plans. 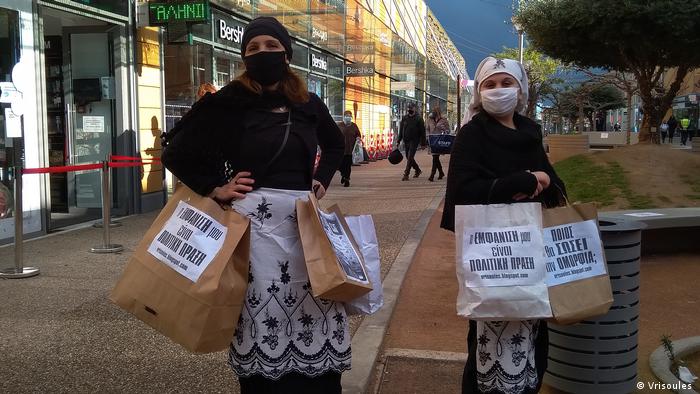 A group of young Greek women in traditional dress and wearing face masks, hand out flyers to shoppers and hold signs reading "nature is our antidepressant," and "my appearance is a political act."

For the past three years, the all-women activist group Vrisoules have been interrupting politicians' speeches and political rallies with singing and dancing to protest oil and gas exploration in Western Greece.

Their name is the Greek word for natural springs, just one of the precious features of the landscape the group says is threatened by fossil fuel exploration. During the protests, they dress in black to highlight what they say is the severity of the situation.

Several oil and gas companies, including US multinational Exxon Mobil and Spanish company Repsol, have rights to explore for oil and gas in an area that includes Crete and the Ionian islands.

These landscapes, with their sandy beaches lapped by azure Mediterranean waters, attract some 11 million visitors each year — or 30% of the country's tourism.

And they're a draw for wildlife, too, encompassing Europe's biggest loggerhead turtle nesting spot and key habitat for whales and dolphins.

High school teacher Eleftheria Tsouknaki says tourism and nature could be damaged if drilling plans go ahead. She and a handful of friends started the group when a friend told them about fossil fuel exploration near their hometown of Ioannina and quickly "understood the dangers."

To make others aware, they began their musical campaign. And they are not the only ones demanding the Greek government rethink its decision to allow oil majors into some of the country's most iconic beauty spots.

At the beginning of February, the Greek and Spanish chapters of international conservation NGO WWF wrote to Greek Prime Minister Kyriakos Mitsotakis asking him to cancel all existing exploration concessions and forbid any new ones.

"It's an outdated political decision made with the wrong data a decade ago and is trapping the country in an energy system of high economic risk and high carbon intensity," the letter read.

It's also a decision that runs against the European grain, as countries like Italy, Croatia, Spain and France have banned fracking, and a group of 63 European Union lawmakers, mainly from the Green bloc, is now calling for a ban on offshore oil drilling across all 27 EU members.

Hydraulic fracturing, or fracking — which involves injecting water, sand and chemicals into shale rock at very high pressure to recover gas or oil — is particularly unpopular across Europe, as people fear the chemicals leaching into soil and water supplies.

Hellenic Hydrocarbon Resources Management (HHRM), which manages the country's hydrocarbon exploration and exploitation rights, says fracking isn't allowed in Greece. But activists and some political parties, like the Greens, claim the law leaves space for the practice.

"We're against fracking and we don't want the country to go back in time while the rest of the world is putting an end to it," Tsouknaki said. 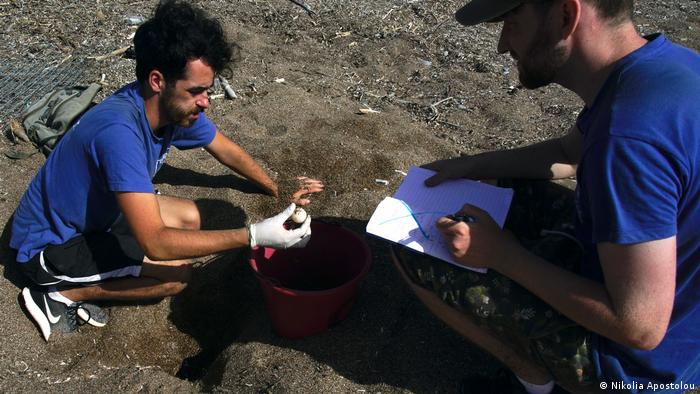 Greece began selling oil and gas concessions at the height of the eurozone debt crisis in 2011, when the country desperately needed cash to avoid bankruptcy.

Last year, Mitsotakis' center-right government made sweeping changes to the country's environmental laws that, among other things, open up protected areas to drilling. Now, some 10% of Greece's landmass is earmarked for hydrocarbon exploration, with further plans for drilling.

A bridging technology for the energy transition?

As part of the EU, Greece is required to do its bit to give up fossil fuels and cut the bloc's emissions by 55% on 1990 levels by 2030. With plentiful sun, it aims to cover 35% of its energy consumption with renewables like solar by that date.

But Aristofanis Stefatos, of HHRM says natural gas, which is less carbon-heavy than coal, also has a role to play as the country aims to ditch domestically produced brown coal by 2028. 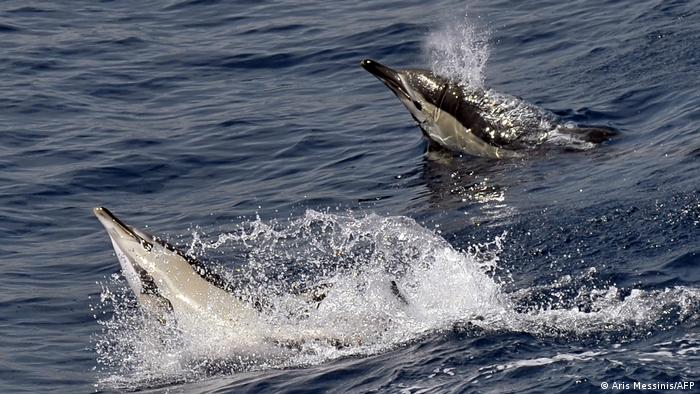 The coastal waters around Greece are home to a number of marine mammals, including dolphins

Currently, Greece imports most of its natural gas. Pushing ahead with exploration now could boost the country's energy independence.

"Given the high cost and the time required to develop alternative solutions, it is evident that we should try to develop the potential gas reserves in Greece as soon as possible," Stefatos said, adding that infrastructure being developed now for natural gas could eventually be used for hydrogen generated from renewables: "Gas infrastructure sets the foundation for hydrogen, one of our best options for clean future fuels."

Threats to air, sea and land

Eco activists, however, are skeptical of this "bridging technology" argument, insisting that Greece's gas and oil, like other fossil fuels, should be kept in the ground. It's a skepticism shared by some energy experts.

"Gas is a bridge to nowhere," said Claudia Kemfert, head of the department Energy, Transportation, Environment at the German Institute of Economic Research (DIW Berlin), in a recent DW interview. "Instead of bridging technologies, we need future technologies, namely renewable energy." 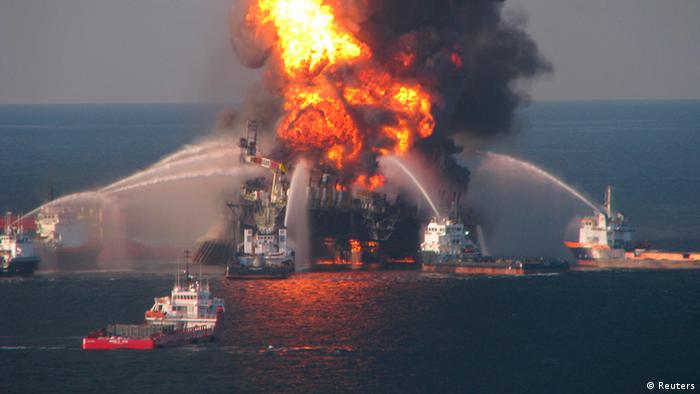 Eleftheria Tsouknaki believes the current drive for exploration has less to do with a managed energy transition than profit. "Greece is being cut into blocks for hydrocarbon exploration and extraction," said the activist. "The whole Mediterranean basin is in danger, from Greece to Spain and northern Africa because of it."

Helen Briassoulis, a professor in the Department of Geography at the University of the Aegean, says air, soil and water pollution from drilling operations and chemical pollution from fracking could harm wildlife, land and water. That in turn, would put jobs at risk in an area highly dependent on tourism, fishing and farming.

She added that one other major polluting risk is that of an accidental oil spill from offshore drilling, similar to the BP Deepwater Horizon disaster, which released 4.9 million barrels of crude into the Gulf of Mexico in 2010, killing 11 rig workers and millions of animals.

"Such big-scale projects are like you're gambling with nature," Briassouli said. "Offshore drilling is a great disaster and I don't think there's been a lot of debate in Greece on what we'll do in the case of an accident."

However, just as the pandemic has dampened the Vrisoules dancers' public performances, it has also complicated fossil fuel exploration. 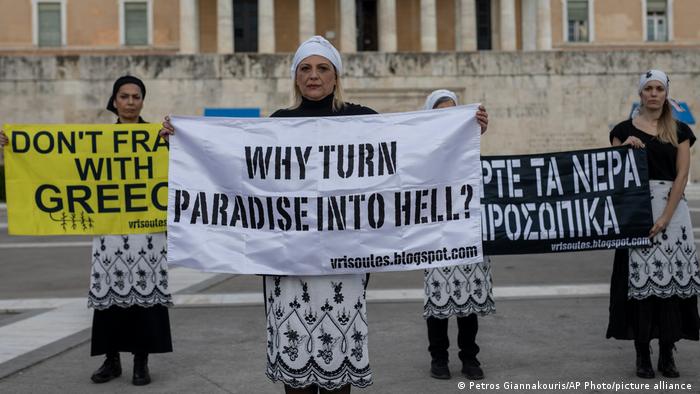 A decade on from the economic crisis that spurred Greece's concession sell-off, the economic fallout from the COVID-19 pandemic and plummeting oil prices prompted energy firm Repsol to announce it would pull out of its interests in Western Greece earlier this year.

Stefatos cautioned against "hasty conclusions about freezing of the exploration activities," stressing that they were continuing in all other blocks, "albeit in some cases with some delays related mostly to the effects of the pandemic on-field operations."

For Tsouknaki the rest of her troupe, the fight to block the exploration continues, if largely online and without singing as the pandemic continues.

"No one should divide half a country from north to south in fields [for oil extraction], especially in virgin areas and areas that might affect the sea and clean water reserves," Tsouknaki said.

Correction 1/04/2021: An earlier version of this article mistakenly stated that Aristofanis Stefatos said fracking would boost Greece energy independence. Stefatos instead said exploration could help with this. The error was made during the editing process.

Big Oil splutters — how will it survive the energy transition?

Plummeting oil prices amid the coronavirus pandemic sparked the biggest oil industry crisis in a century. Already facing pressure to commit to the energy transition, can these goliaths adapt in time?

Renewables are looking more attractive as fossil fuels from Russia are banned. Middle Eastern countries have huge potential in solar power but will lack of critical Russian and Ukrainian raw materials thwart progress?

Why raw materials could impact speed of energy transition 29.11.2021

Public debates about the EU's dependence on oil and gas imports are mounting. But Europe might soon find itself in an even weaker position in a field crucial for energy transition: critical raw materials.

Russia-Ukraine updates: Moscow warns of possible end to relations with US