Belarus has seen major disruptions in internet service since the disputed presidential election, with rights groups accusing the government of censorship. To get around the restrictions, many are turning to privacy apps. 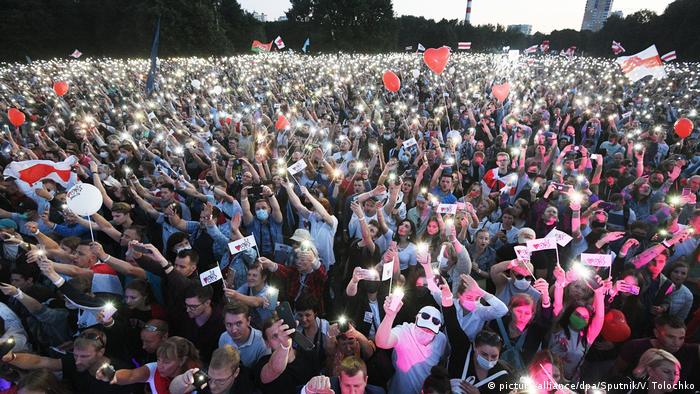 During the contested presidential election on August 9, and as protesters clashed with police in the days that followed, internet service across the country was severely disrupted. Independent experts reported that network connectivity was down to 20% from the usual levels.

Most websites in Belarus, including search engines, social media sites, independent media and even online taxi services were virtually inaccessible for three days.

Authorities blamed the disruption on unknown attacks from abroad, but many saw it as a deliberate attempt on the part of the government to hinder protest organizers. An open letter addressed to the UN human rights office, signed by more than 50 human rights organizations around the world, accused the government of violating freedom of expression and the right to peaceful assembly.

To circumvent the shutdown, many Belarusians turned to free anonymizing tools and virtual private networks like Telegram and Psiphon, which has topped the downloads at the Google app store in the days since the vote. Psiphon saw its regular daily users in Belarus skyrocket in just one day — from 10,000 ahead of the election to more than a million.

"People learn very quickly about Psiphon because of our history in providing this kind of service," said Michael Hull, the head of Psiphon and one of its co-founders. When tens of thousands of Iranians took to the streets in protest in late 2017 and early 2018, the government responded by blocking social media networks like Facebook, Twitter and Telegram. To get around the ban, millions turned to Psiphon.

Read more: Tor, Psiphon, Signal and co.: How to move unrecognized on the internet

Hull said the tool is "a system tailored for anti-censorship," diverting internet traffic using a secure network of constantly changing servers to allow users to freely access the global network. It's not a tool "help people to get on Netflix US or something like that. That's not our goal," he said.

The Canadian app, developed at the University of Toronto in 2006, makes use of 3,500 servers worldwide and an additional 100 servers within Belarus to get around shutdowns. Hull said this makes it one of "the most resilient and sophisticated networks in the world," adding that it's also the only VPN provider to have been translated into Belarusian. "No one else is doing that," he said.

Psiphon has been working with media outlets such as DW, the BBC and Voice of America to provide free access to information for years with their own version of the app. "Our cooperation really paid off," said Hull, adding that his network "was designed so that users can get access to large amounts of data, including video streaming."

The internet is back up and running in Belarus — for now. But with the daily protests showing no sign of stopping, further internet restrictions could be just around the corner.

To make use of the DW Psiphon app, send an empty email to dw-w@psiphon3.com for a download link from Psiphon. If you use Psiphon via DW, you will first be directed to the DW website. From there, you can continue on to any other website on the free internet.

The Taliban say that they want to ensure internet access in Afghanistan, but they could face substantial technical and financial challenges to keep it running. Afghans say they fear more surveillance and censorship.