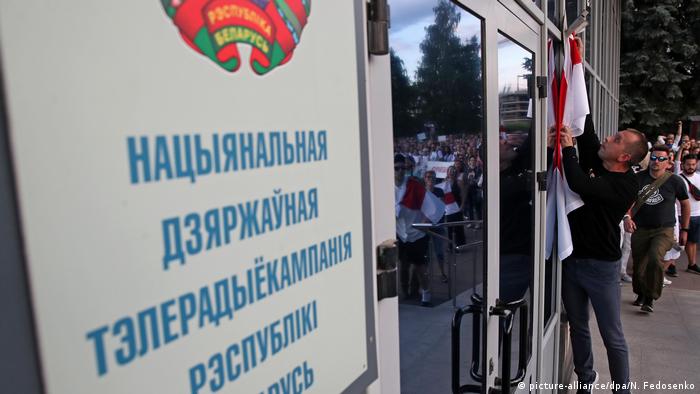 "We're going on strike," a BT worker told the Interfax news agency, adding that around 100 staff members had gathered outside the broadcaster's headquarters in Minsk.

Belarus has been rocked by demonstrations since last Sunday when strongman leader Alexander Lukashenko claimed victory in a presidential election his opponents say was rigged.

The opposition called a nationwide general strike from Monday after thousands of factory workers from state-owned plants downed tools last week and joined the protests. That development is being seen as a sign that Lukashenko's traditional support base is turning against him.

According to independent Belarusian news portal Tut.By, journalists, camera operators and other staff at state broadcaster BT issued a notice to management early Monday with a series of demands, including calls to end media censorship and to recognize the election results as invalid.

The news website said it was not clear how many of BT's 1,500 employees joined the strike.

Twitter users posted images of the broadcaster's "Belarus 1" TV channel on Monday morning showing an empty studio with music playing in the background:

The walkout comes after thousands of people rallied outside BT on Saturday, holding banners with slogans such as "Show people the truth." State television news initially ignored the demonstrations and gave Lukashenko's supporters preference in its reporting of the elections, sparking complaints of skewed coverage. As a result, several prominent state television journalists resigned in protest.

"Like everyone we are demanding free elections and the release of those detained at mass protests," one employee, Andrei Yaroshevich, told the AFP news agency.

News agencies reported that thousands of workers at state-run factories, such as the Minsk Tractor Works (MTZ), had also staged walkouts on Monday.

Lukashenko has rejected allegations of election rigging, and instead blames the unrest in Belarus on foreign interference. Some 7,000 people have been arrested and at least two people killed in a post-election crackdown by security forces.

Meanwhile, opposition presidential candidate Sviatlana Tsikhanouskaya, who has fled to neighboring Lithuania, urged security forces to switch sides from Lukashenko. She said Belarus should create a legal framework for fresh elections, adding that she was ready to lead the country.