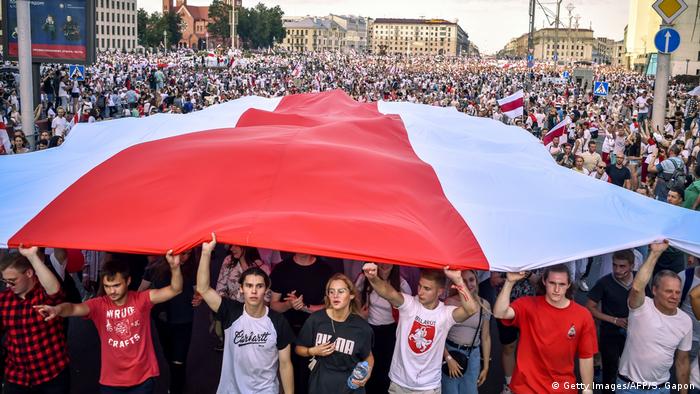 Speaking at a rally of his supporters in central Minsk, the 65-year-old leader dismissed opposition calls for a new election and urged Belarusians to defend their country.

"I called you here not to defend me, but for the first time in a quarter-century, to defend your country and its independence," he said to the estimated 5,000 strong crowd, just as tens of thousands of protesters once again hit the streets in several cities demanding his ouster.

Opposition presidential candidate Sviatlana Tsikhanouskaya, who fled to neighboring Lithuania on Tuesday, wants an election recount and is forming a national council to facilitate a power transfer. 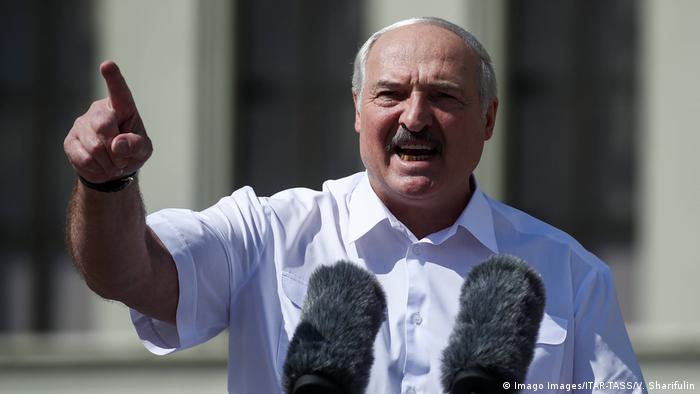 Lukashenko appeals to his supporters to defend Belarus

NATO said it was closely monitoring events in Belarus, but denied a military buildup was underway in eastern Europe.

"NATO's multinational presence in the eastern part of the Alliance is not a threat to any country. It is strictly defensive, proportionate, and designed to prevent conflict and preserve peace," a NATO spokeswoman said in a statement.

Belarus has been rocked by demonstrations since last Sunday when Lukashenko claimed victory in a presidential election his opponents say was rigged. Two people have died in the protests and thousands have been arrested.

Lukashenko, who has led the former Soviet state for 26 years, denies election fraud. He says foreign interference is to blame for the unrest.

"If we kowtow to them, we will go into a tailspin," he told his supporters. "We will perish as a state, as a people, as a nation."

"The motherland is in danger!" one speaker told the crowd, as people chanted "We are united," and waved the national flag.

"I'm for Lukashenko," Alla Georgievna, 68, told Reuters news agency. "I don't understand why everyone has risen up against him. We get our pensions and salaries on time thanks to him." 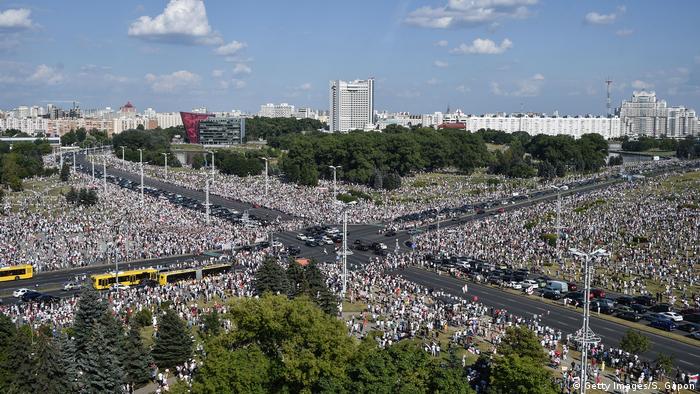 Meanwhile, hundreds of thousands of opposition supporters were holding a nationwide "March for Freedom" to renew pressure on Lukashenko to step down.

In Minsk, where The Associated Press estimated more than 100,000 people turned out, columns of protesters raised victory signs and held flowers and balloons. Many wore white, the color that has come to symbolize the opposition movement.

Demonstrators held placards with slogans such as "We are against violence" and "Lukashenko must answer for the torture and dead."

Other major towns and cities in the ex-Soviet country of 9 million also saw large rallies, local media reported, on the ninth straight day of anti-government protests.

DW's Moscow correspondent Emily Sherwin tweeted that there are signs that the state TV channel could flout government control after several high-profile staff resigned and broadcasts included more coverage of the protests.

The European Union says the presidential vote was neither free nor fair, and is preparing to impose sanctions over the post-election crackdown.

EU Commission Vice President Josep Borrell praised the protests in a tweet, saying: "Hundreds of thousands of Belarusians were out today demonstrating peacefully, demanding the release of political prisoners, prosecution of those responsible for police brutality, and real elections."

"The EU stands by the Belarusian people," he added.

French President Emmanuel Macron said the EU should support the anti-government demonstrations in Belarus. "The European Union must continue to be mobilized in support of the hundreds of thousands of Belarusians who are protesting peacefully for the respect of their rights, liberty and sovereignty," Macron said on his Twitter feed.

Meanwhile, German Finance Minister Olaf Scholz described Lukashenko as a "dictator" who had lost the support of his people.

"This is a bad dictator and therefore he needs clear statements and clear language," Scholz, who is also Germany's vice chancellor, told the Bild newspaper.

"I am firmly convinced that this president no longer has any legitimacy, otherwise he would not rule with such unbelievable and brutal force," said Scholz, who is the Social Democrat candidate to succeed Chancellor Angela Merkel.

"This is not about economic sanctions, which would primarily affect the Belarusian population, but we as the EU want to punish specific individuals proven to have been involved in rigging the election and violence against demonstrators," Maas said.

Earlier on Sunday, Russia said it had offered Belarus military assistance if necessary. Moscow also said external pressure was being applied on the country, but did not say where from.

Lukashenko told state TV he would move an air assault brigade to Belarus' western border. According to the RIA news agency, the Belarusian army also plans to hold weeklong drills to strengthen the country's borders with Poland and Lithuania starting on Monday.

Asked what could be done to prevent Russia becoming involved, German Finance Minister Scholz said: "Military interference in other states is not acceptable at all and breaks all the rules we have set ourselves under international law."