Belarus: Arrested protesters talk of brutality | Europe | News and current affairs from around the continent | DW | 15.08.2020

Thousands were arrested in a violent crackdown during recent anti-government protests in Belarus. Those who have since been released say they were tortured and beaten. DW spoke with three men about their experiences. 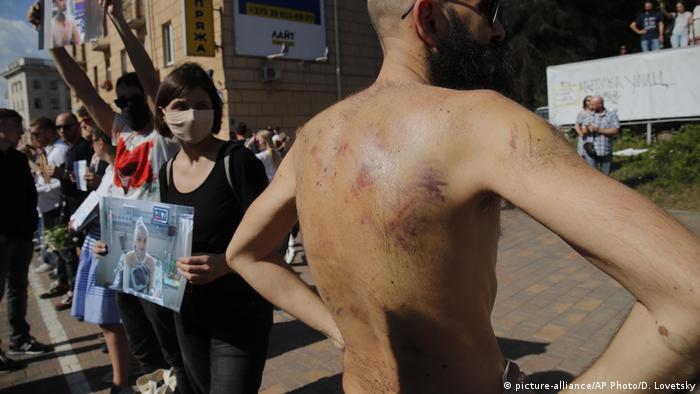 "They hit us and asked us if we thought they were fascists," Andrei (name changed to protect his identity) told DW after he had been released from Okrestina Street detention center in the capital, Minsk.

"Of course, if you're being beaten up, you're not going to say: 'Yes, you're fascists!' But what are you if it's your job to beat people up and you even have fun doing it?"

Andrei is one of some 7,000 people detained in a brutal crackdown on anti-government protests earlier this week. On Thursday, Belarusian Deputy Interior Minister Alexander Barsukov announced to journalists at the Okrestina detention center that all the protesters would be released, and stressed that there had not been any abuse.

Pavel Chudka, who was arrested on August 10 in the center of Minsk, would beg to differ. He told DW that the riot police had used a device to give him electric shocks near his kidneys when he was already on the ground. "It doesn't leave any visible marks but I felt the shocks for almost five minutes and couldn't walk afterward," he said. He also explained that his lower jaw and throat were so tense that he could not talk or swallow for more than a day.

Read more: Opinion: For Belarus it's now or never

With his hands still shaking, he told DW he had been humiliated. He said that those who had arrested him had asked whether he liked the abuse, and asked whether he would go back out onto the street to protest again. They then brought him to the Okrestina detention center, where he saw many of the hundreds of other protesters being beaten and tortured. They were ordered to stay in the courtyard, and every 20 minutes they were forced to go from one wall to another, 20 or 30 meters (about 100 feet), on their knees.

Andrei said an ambulance turned up four times, but paramedics were never allowed into the overcrowded building. "There were 25 people in a cell that was 10 by 10 meters in size," he explained. "And there were also minors, who were the first to be released." 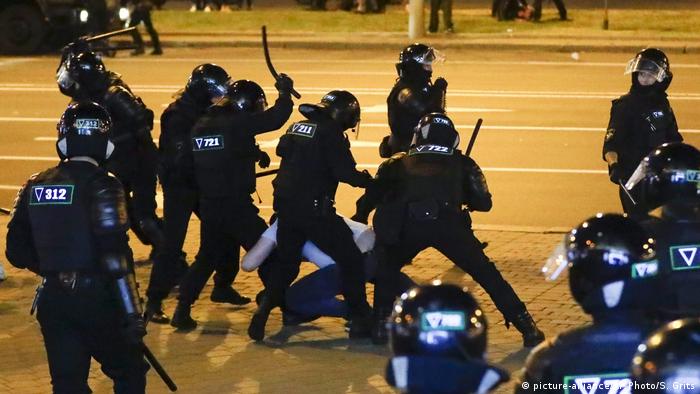 'One of the lucky ones'

Andrei was arrested not far from the Pushkinskaya metro station on August 11. He told DW that he was bundled into a van and told to get down on his knees, after which his legs were beaten.

When they arrived at the main police station, he said "there were 30 people lying there with their faces pushed into the asphalt. Wardens were going up and down among them. We also had to lie on the ground and then we were hit and sprayed with water."

Andrei said he probably lay on the ground for about three hours. He is now badly bruised on his legs and back, but he considers himself one of the "lucky ones." "I saw some people come out in a much worse state."

Andrei said he and the other detainees at the police station had been forced to sign a pre-prepared text which said that they had "taken part in unauthorized actions and shouted inflammatory slogans." Those who refused were taken to another room and beaten until they signed. Then they were put in overcrowded cells and not even given any water to drink.

Andrei was then taken to Okrestina Street detention center where he was also mistreated, before he was released on August 13. 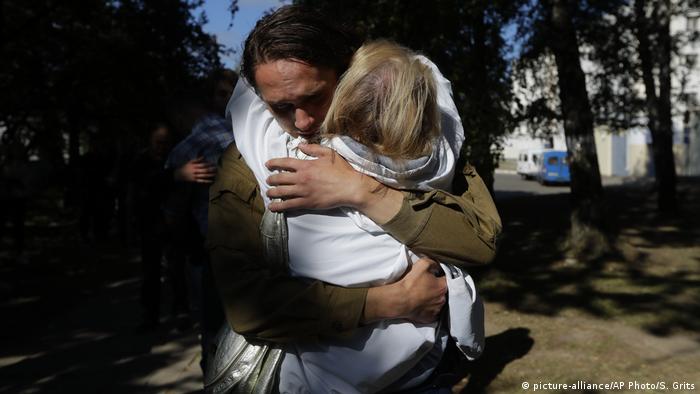 Relatives of detained protesters often had no idea where they were

'They should die of thirst'

Mikhail, whose name has also been changed to protect his identity, told DW he was arrested and put in a van with some people who were badly injured. A doctor who was allowed to attend to the injuries shouted at the soldiers, calling them animals. One responded by telling her to be quiet and get on with her work.

Mikhail, who was taken to the Leninskiy District police station, told DW that he had not even taken part in the protests. "We were in a traffic jam when some people with shields and batons turned up," he said. "I think they were a special army unit. They told us to get out and give them our phones. They checked to see if there were any pictures or videos of the protests." 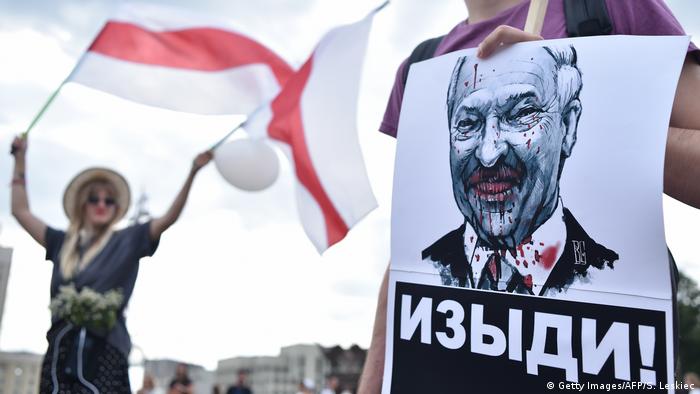 White and red flags have become a symbol of the protest, along with signs telling Lukashenko to 'Go away!'

He was arrested after a video showing someone waving the white-red-white flag, which has become a symbol of the opposition, was found on his phone. The flag was briefly used by the Belarusian Democratic Republic in 1918 and then adopted by Belarus after it gained independence from the Soviet Union in 1991. However, it has not been used officially since 1995.

"The soldiers warned me to keep quiet so I wouldn't be beaten," Mikhail explained. "But others in the van were badly beaten. One, a man next to me, couldn't talk. He was just moaning quietly, and it looked like he wouldn't be able to stand on his own two feet."

At the police station, he saw people being beaten with batons and fists. There were also four women and one minor male among the detainees.

Mikhail told DW that he spent the night outside in the courtyard with his face to the wall and his hands tied. He wasn't allowed to sit down, though he felt dizzy, and he didn't get anything to drink. One of the wardens even said the protesters should not be given water, saying they "should die of thirst!"