Germany have endured another lopsided defeat at the world hockey championship. With their toughest opponents now behind them, coach Marco Sturm likes much of what he's seen, but he knows they have a lot to improve on. 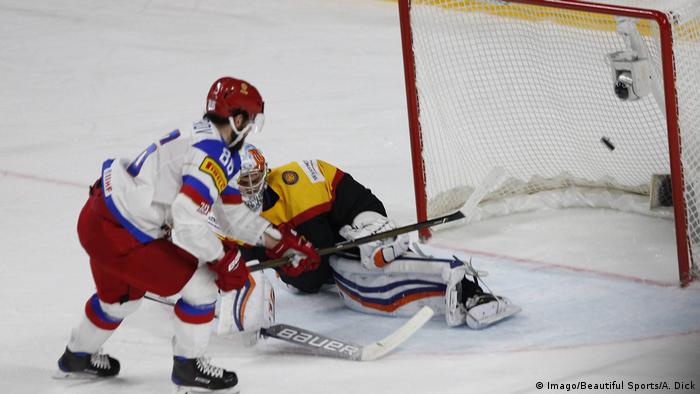 Having gone down to a 7-2 defeat at the hands of Sweden on Saturday, Germany were humbled for a second game in a row on Monday. This time it was the mighty Russians who put on a clinic beating Germany 6-3 at Cologne’s Lanxess Arena.

German coach Marco Sturm's men did all they could do to implement his game plan, which consisted of being compact in their own end and taking away the shooting lanes, while trying to strike on the few counterattacks that would come their way. However, for a team like Germany to get anything from a game against the Russians, who have won more world championships than any other nation, absolutely everything needs to go right.

This simply didn't happen in Cologne on Monday. To have any chance of success, Germany needed to keep the Russians off the scoreboard as long as possible. To do that, they needed a combination of an extremely disciplined game from their forwards and defensemen – in part by staying out of the penalty box – while getting a near perfect game from goaltender Thomas Greiss.

Germany came up short on all accounts – not a whole lot short – but it was short enough.

Going down a goal at 1:04 of the opening frame certainly wasn't in the game plan, but Germany continued to fight hard and through the next 12 minutes it looked like there could be reason for hope.

This all changed in the 14th minute when Patrick Hager took down Sergei Mozyakin from behind. The Russian hit the ice extremely hard and had to be helped from the ice. He would not return. Hager was assessed a five-minute penalty for an offense that you rarely see called in ice hockey – slew-footing . He was also assessed a game misconduct.

"We took some bad penalties and that put us behind the eight-ball a little bit," Sturm would concede afterwards.

The Russians capitalized on the ensuing powerplay, then added another before the end of the first. By this point it was pretty clear that all Germany could do was to try to keep the score respectable – and move on to the rest of the group stage.

That's because the way the schedule worked out for Germany, there are actually two distinct phases for them in Group A. The first was what you might call the "phase of death," which saw the them face three of the top five teams in the International Ice Hockey Federation's (IIHF) rankings:  the United States (4), Sweden (5) and Russia (2). In the second "doable" phase, 10th-ranked Germany can look forward to games against Slovakia (8), Denmark (13), Italy (18), and Latvia (12). 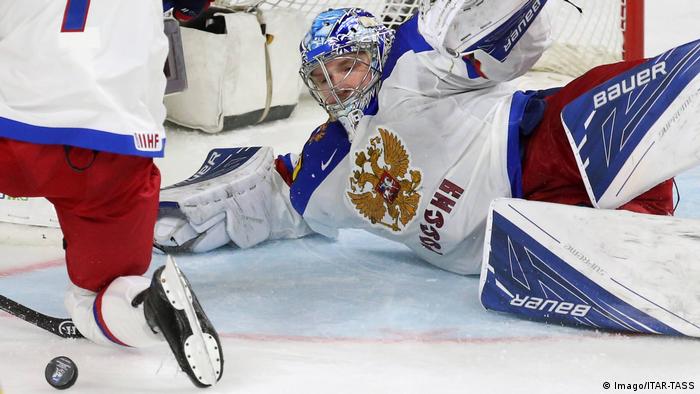 Russian goalie Andrei Vasilevsky didn't have a whole lot to do, but Germany did put three past him in the third

"Nobody likes to lose, but we were in the game at times," coach Sturm told reporters afterwards – and he was right. Although by that time, the Russians had taken their foot off the gas, Germany actually "won" the third period 3-1.

Sturm and his players will also take a lot of encouragement from that major 2-1 upset over the United States on Friday. Instead of emerging from the "phase of death" with a goose egg, they move on with three points.

"If you had told us before the tournament that we would get three points from these three games, we definitely would have taken it," veteran forward Phillip Gogulla said.

At the same time, Sturm and his team know that they will have to improve in certain areas, if they are to beat some of their upcoming opponents – by staying out of the penalty box, for one thing. Three of Russia's goals came on the powerplay.  However, the coach also hopes that despite the disappointment of losing their last two games, having had to play these "big three" at the start of the tournament will ultimately work in Germany's favor.

"The good thing about playing against really good players, better players, is that you hopefully learn a lot from it," Sturm said. "And I hope my players have learned a lot from it. They have been making certain mistakes over and over, and we can't afford this in the upcoming games."

And despite the fact that key forward Tobias Rieder has gone down with a knee injury, and Hager could face a suspension for his foul on Mozyakin, like Gogulla, the coach is more than pleased to be moving on to the "doable" phase of their Group A schedule with three points already in the bag.

Germany next face Slovakia on Wednesday.