The days of Germany only being known for its hearty cuisine are over. Ice cream is whetting the appetites of Germans nationwide - to the tune of $2.7 billion in market value in 2013. 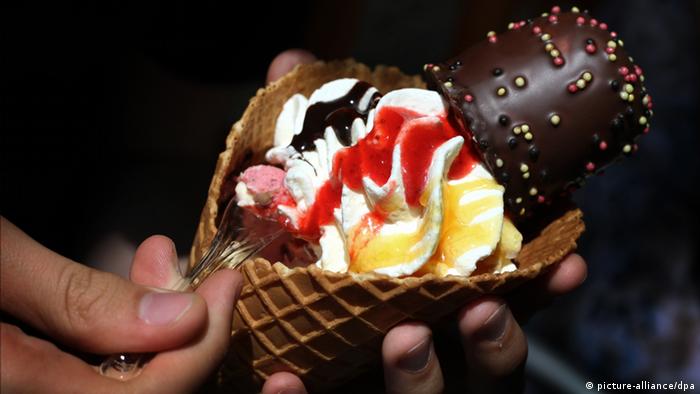 When diners think of Germany, their minds are likely to wander to traditional foods like schnitzel, sausage, pretzels and beer.

But according to a new study by the market research firm Canadean, Germany is becoming an ice cream nation.

In 2013, Germany boasted the most lucrative market for ice cream in Europe at $2.7 billion (2.01 billion euros), beating out the inventors of the cool delight, Italy.

Last year Germany produced a staggering 627 million liters of ice cream, according to the website markeneis.de. Of that, 80 percent was produced industrially, 17 percent commercially and the remaining 3 percent for the soft-serve sector.

Germans, forever proponents of Gemütlichkeit, still prefer to enjoy ice cream in the comfort of their own homes. 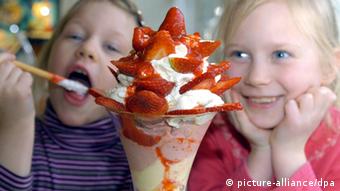 German's have a "high desire for indulgence" in ice cream

For children, ice cream is an accessory to life's most important events - a birthday party without Jell-O and ice cream would be like Christmas without the beloved Stollen fruit cake.

But today, it is adults who are leading Germany's ice cream revolution. According to the Canadean report, people over 55 are responsible for almost 40 percent of the country's ice cream consumption - although they only make up a third of the population.

By contrast, Germans under 18 only gobble up 15 percent of all that ice cream.

Only the best will do

In a nation known for its refined palate, not just any old ice cream will fit the bill.

"For an ice cream product to succeed in Germany, it needs to offer an indulgent experience above all else," said Catherine O'Conner, senior analyst at Canadean. "While German consumers are also seeking convenience and quality products, as well as ice creams that bring fun and relaxation, these needs shrink in comparison to the high desire for indulgence that drives the market."

Germany's love affair with the creamy frozen dessert can be traced as far back as the 1800s. One of the country's first well-known ice cream parlors was founded in Munich in 1879 by the Sarcletti family. 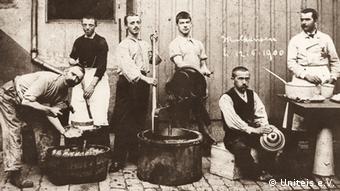 But it wasn't until the 1920s, when Italians began migrating to Germany in droves, that the first real rise in popularity hit.

It was that wave of Italian immigrants that established many of the country's 4,000 ice cream parlors, many of which are still run by their German-Italian descendants.

Return to the Italian roots

Today, ice cream in Germany has become so much more than just a scoop and a cone. The best German parlors have made serving ice cream an art form, creating exotic culinary delights in the shape of various objects and foods, such as the popular spaghetti ice cream.

An ice cream parlor in the western German city of Dortmund recently scooped the top prize, the Coppa d'Orra, at an international ice cream trade fair in Italy for its vanilla-flavored dessert. Judges praised the ice cream for its "fresh and well-rounded flavor."

In a nod to Germany's more traditional favorites, the Feltrin family has also developed an ice cream dish designed to look like sausage and French fries.

"It's all made with love," said prize winner Ivano Feltrin, whose family has been making Italian-style ice cream for five generations. "We have ice cream making in our blood."

At the height of summer, Germany's latest affinity is set to reach an all-time high, no doubt securing its place as next year's ice cream king in the process.

A taste of Italy in Germany