It is Germany's first quantum computer, and it is capable of bending the laws of physics and computing in order to work. IBM hopes to have a quantum computer that is 37 times faster in two years. 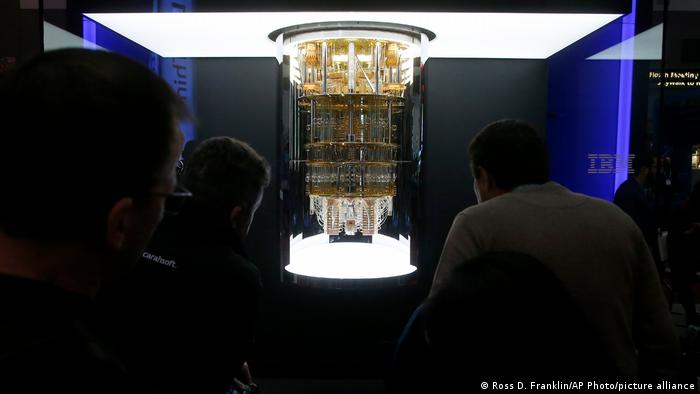 IBM unveiled one of Europe's most powerful quantum computers on Tuesday, during an event at its German headquarters.

IBM said the Q System One was "Europe's most powerful quantum computer in the industrial context."

The quantum computer is to be housed in Ehningen, which is about 20 kilometers (12 miles) southwest of Stuttgart. It will be operated by Germany's Fraunhofer research institute. It is the company's first quantum computer in use outside of the US.

Regular modern computers process functions in a binary fashion, carrying out tasks that use fragments of data that are only ever a 1 or 0. Quantum computers use subatomic particles to perform calculations at far greater speeds than existing supercomputers, and data can be both a 1 and 0 at the same time. The data fragments on a quantum computer, known as qubits (short for "quantum bits"), significantly boost its computing power.

What is a quantum computer, exactly?

The machine is housed in a 9-foot (2.7 meter) tall glass cube to shield the qubits from noise and other physical disturbances, to which they can be sensitive.

The computer has been running since February, but its launch event was postponed as a result of the pandemic.

German Chancellor Angela Merkel, who holds a PhD in quantum chemistry from her time as a scientist in former East Germany, called the computer a "miracle of technology.”

Speaking via video, Merkel said it could play "a key role in our efforts for technological and digital sovereignty, and of course for economic growth."

The German government announced last month that it planned to invest some €2 billion ($2.4 billion) in quantum technology research by 2025.

The Fraunhofer institute said it would work with German companies and other research organizations to use the quantum computer to deepen its understanding of quantum computing and experiment with practical uses.

The project, funded by German taxpayers, will cost about €40 million over the next four years.

The European Commission wants the European Union to develop its first quantum computer before the end of the decade.

Martin Jetter, IBM’s chairman for Europe, the Middle East and Africa, said IBM is working towards making a stable quantum computer capable of handling more than 1,000 qubits by 2023.

Despite its reputation as an industrial and research powerhouse, Germany has fallen behind when it comes to quantum computing. But a new computer at home could change all of that.

Will mutations change our vaccination strategy? Also, a controversial step in the fight against Alzheimer's, and how to tell a six-year-old what a quantum computer is.

Chancellor Angela Merkel has sounded the alarm over Germany's increasing COVID-19 cases and hospitalizations. She said she is also worried about the comeback of a "certain recklessness" among the population.