Hungary's Viktor Orban hopes a right-wing alliance can help gain an anti-migrant majority in the European Parliament. The alliance was pitched by Italy's Matteo Salvini, whom Orban described as a "hero." 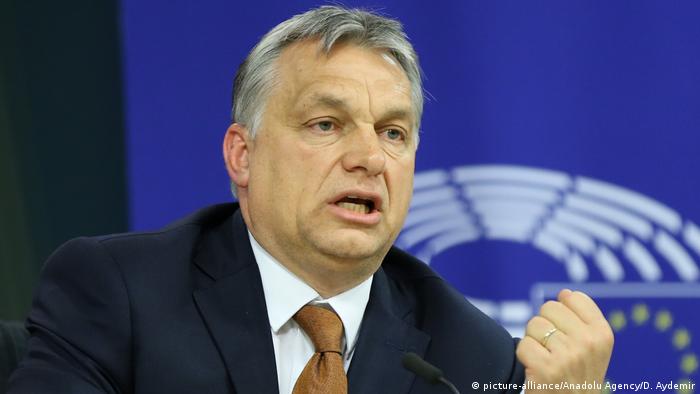 Hungarian Prime Minister Viktor Orban on Thursday pledged his full support for an Italian-Polish initiative to form a right-wing alliance for European Parliament elections due in May.

Orban said Hungary's goal was to gain an anti-immigrant majority in the European Parliament that he hoped would spread to the European Commission, and later, as national elections change the EU's political landscape, the European Council.

Italian Interior Minister Matteo Salvini said during a visit to Warsaw on Wednesday that Italy and Poland should join forces in a euroskeptic alliance, expressing hopes that an "Italian-Polish axis" would replace the current "French-German axis."

"The Polish-Italian or Warsaw-Rome alliance is one of the greatest developments that this year could have started with," Orban said, describing Salvini as a "hero" for stopping migration on Italy's shores.

'I must fight' Macron

Orban spoke out against French President Emmanuel Macron, whom Orban described as the leader of pro-immigration policies in Europe.

"It is nothing personal, but a matter of our countries' future," Orban said of Macron. "If what he wants with regards to migration materializes in Europe, that would be bad for Hungary; therefore I must fight him."

Orban also said he could not see any chance for a compromise with Germany. He said German politicians and media attack him and put excessive pressure on him to admit migrants.

He predicted that there would be two civilizations in Europe: One "that builds its future on a mixed Islamic and Christian coexistence" and another in Central Europe that would be only Christian.

Orban won a third consecutive term in April, following a campaign that focused on anti-immigration policies, as the continent's voters increasingly respond to populist agendas.

While Salvini on Wednesday said he and Jaroslaw Kaczynski, Poland's ruling party leader, agreed on most issues, Polish officials appeared to have some reservations at the prospect of forming an alliance with Salvini, who is seen in Poland as too friendly to Russia.

Polish lawmaker Witold Waszczykowski, a former foreign minister, said "the only arrangements that have been made concern further meetings and further consultations, but there are no arrangements for a deal, a creation in advance of alliances or common clubs in the European Parliament."

A leading commentator for the Rzeczpospolita daily newspaper, Michal Szuldrzynski, said he believed Salvini heard more about what divides Italy's League and Poland's Law and Justice party than what unites them during his visit.

"Kaczynski showed that he doesn't want to be a part of a euroskeptic alliance under the patronage of the Kremlin," Szuldrzynski wrote in Thursday's paper.

The rise of anti-immigration leaders