Hungary: Orban accuses EU, US of meddling as election looms

Hungary's Prime Minister Viktor Orban has accused Brussels and Washington of backing the opposition seeking to replace him after more than a decade in power. 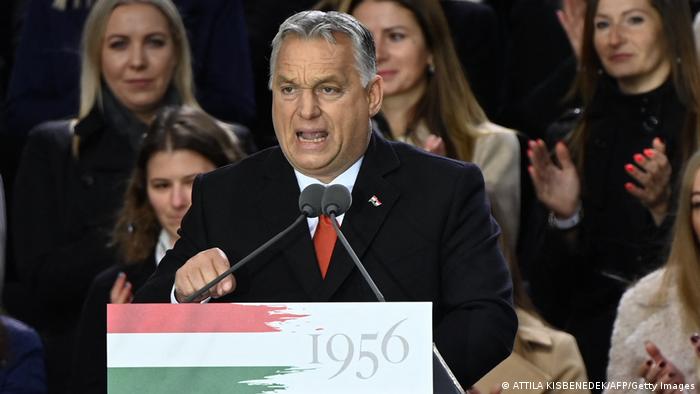 Prime Minister Viktor Orban, who faces a parliamentary election in April next year, accused Brussels and Washington on Saturday of trying to meddle in Hungarian politics.

Orban told tens of thousands of his supporters at a rally in Budapest that Washington and Hungarian-born billionaire George Soros were trying to get the Hungarian leftist opposition elected using their money, media and networks.

"But what matters is not what they in Brussels, in Washington and in the media which is directed from abroad, want. It will be Hungarians deciding about their own fate," Orban said.

"Our strength is in our unity... we believe in the same values: family, nation, and a strong and independent Hungary," he said, calling on his supporters to defend his nationalist government.

The rally drew participants from across the country as well as from Romania, Italy and Poland.

Several Orban supporters at the rally were seen carrying Polish flags while one held a placard reading "Brussels = dictatorship."

Showing his support for Poland, Orban said the "EU speaks and behaves to us as and the Poles as if we were enemies."

Europe's "high dignitaries wanted to beat Hungarians into Europeans, liberals" and tell the citizens of Hungary, as well as Poland, how to live, he said.

Orban's anti-immigration government faces increasing pressure both in Hungary and Brussels. The EU is considering imposing financial penalties on Hungary over concerns of weakening democratic institutions and the rule of law.

Both Hungary and Poland have vowed to veto any EU measures to punish the other.

"Brussels would do well to understand that even the communists could not handle us. We're the David who Goliath is better off avoiding," Orban said.

Hungary celebrated a bank holiday on Saturday, marking the uprising against communist rule that erupted on October 23, 1956, and was suppressed by Soviet troops a few days later.

Meanwhile, some two kilometers away from Orban's rally, thousands of people gathered in support of the opposition.

For the first time since he rose to power in 2010, Orban will face a united front of opposition parties, including leftists, liberals and the formerly far-right, now center-right, Jobbik party in next year's race.

The six-party alliance is led by small-town mayor and Catholic conservative Peter Marki-Zay.

At the separate opposition rally, Marki-Zay said that if elected, his government would draft a new constitution, stamp out corruption, introduce the euro and guarantee freedom of the press.

"This regime has become morally untenable... the momentum we have now should take us to April 2022," he said.