Hundreds of wanted 'neo-Nazis' at large in Germany

Over 400 right-wing extremists with warrants out for their arrest are still free, according to German government data. The Left party has said the rising trend indicates the presence of an "established Nazi underground." 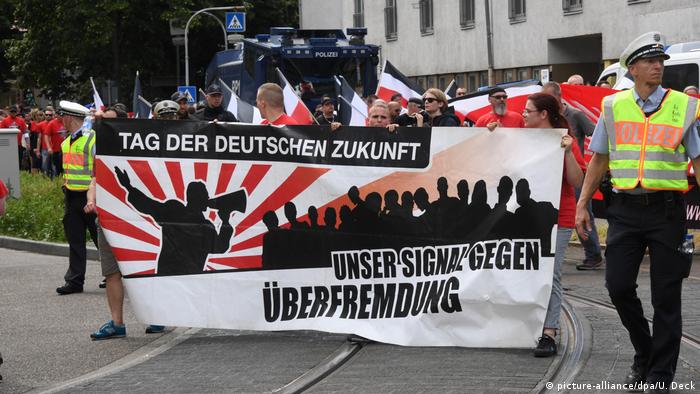 Some 462 people wanted for committing right-wing crimes in Germany have yet to be arrested, reported Funke Media Group newspapers on Sunday.

First it was Franco A. Then came a second Bundeswehr officer. The arrests of right-wing terror suspects working in the military raise questions about how attractive the Bundeswehr is for extremists. (11.05.2017)

A new report has found some 750 right-wing extremists in Germany own guns legally. Meanwhile, refugee-related attacks with weapons more than doubled from the previous year. (06.05.2017)

Far-right "Combat 18" militants have managed to set up structures in several German states despite a nationwide ban, German media have reported. Still, authorities do not see grounds to launch an investigation. (27.01.2017)

The German interior ministry released the figures in response to a parliamentary inquiry. According to the data, around 600 arrest warrants for the 462 right-wing extremists have not been administered.

The trend of wanted right-wing criminals who have evaded authorities appears to be on the rise. In 2015, the number of fugitives at large and believed to have gone underground was 372.

The NSU, a secret neo-Nazi group that operated between 2000 and 2007, was responsible for the murders of 10 foreigners, two bombings and 15 bank robberies.

German officials have warned that some banned neo-Nazi groups have reactivated activities. For example, in 2000, Berlin banned "Combat 18" and its mother organization "Blood and Honour." In January, authorities said that over the past four years, "Combat 18" has managed to reactivate its network.

The Left party's spokeswoman on domestic policy, Ulla Jelpke, told the Funke Media Group that she was alarmed by the figures.

"I find the high number of fugitive neo-Nazis who have evaded arrest for a long period of time extremely worrying," Jelpke said.

The figures are "an indication of an established Nazi underground," she added.

The Left party MP noted that the right-wing scene has exhibited a readiness to commit crimes and acts of violence. Jelpke noted that the figures do not appear to indicate that authorities have increased efforts to track down right-wing criminals.