How the German military is helping in flood-hit areas | Germany | News and in-depth reporting from Berlin and beyond | DW | 19.07.2021

How the German military is helping in flood-hit areas 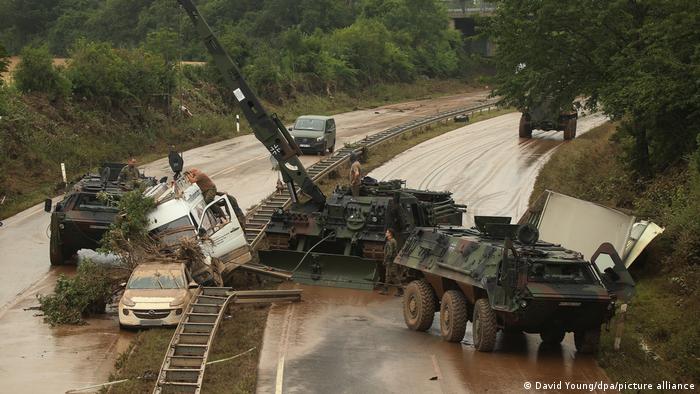 The German army has sent personnel and heavy equipment to parts of Rhineland-Palatinate and North Rhine-Westphalia as cleanup and rescue efforts continue following some of the worst flooding the country has ever recorded.

Over a thousand soldiers and over 200 military vehicles have been deployed in western Germany over the last few days, after widespread flooding left over 160 people dead and countless homes destroyed or damaged. 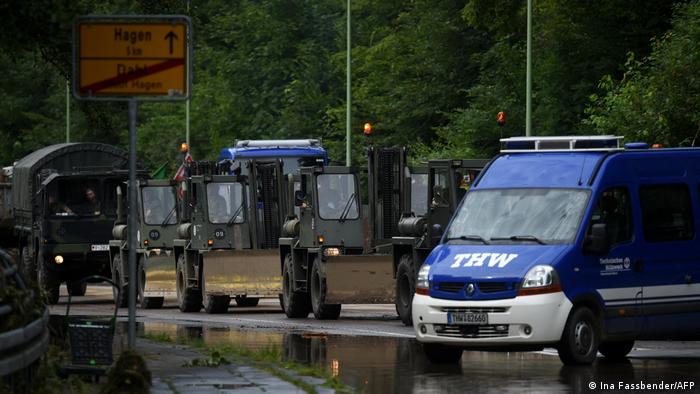 The army has sent around 550 soldiers to the state of North Rhine-Westphalia, around 300 to Rhineland-Palatinate, and around 100 to Bavaria, the German Defense Ministry said in a statement. One military depot in Merchernich, North Rhine-Westphalia, was itself filled with floodwaters and had to be cleared and protected with sandbags.

In addition, the German military has provided the services of two helicopters, eight firefighting trucks, a satellite communication system, machinery that replaces sections of destroyed road, and field kitchens.

The German military's activities are carefully circumscribed by the country's Basic Law, or constitution — among other rules, the army can only be deployed inside the borders at the specific request of a civilian authority, or if human safety is in imminent danger.

There are also strict constitutional boundaries to what the Bundeswehr can and cannot do inside the country. In a natural disaster scenario such as a flood, the military cannot take over security duties, or even support the police — only an imminent threat to social order would allow that. 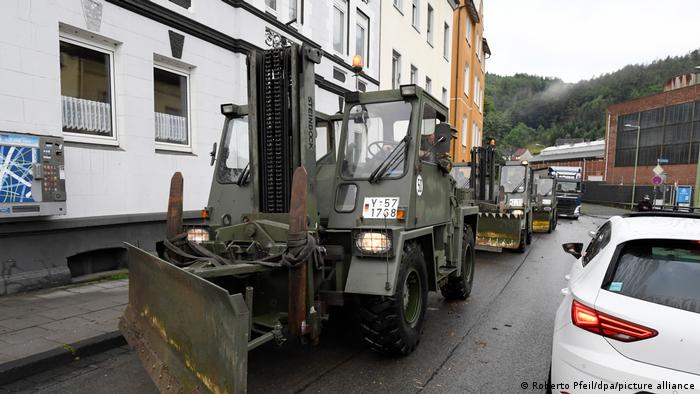 Over 200 vehicles and 1,000 soldiers have been deployed in western Germany and Bavaria

These restrictions stem from Germany's history and have become part of the country's political culture, though not without controversy — as military personnel were called in to help track-and-tracing during the early part of the coronavirus pandemic last year, some local authorities in Berlin were criticized for refusing to ask for military help.

The army is currently carrying out 23 operations in the flood regions in answer to official requests for help from local authorities, though a Bundeswehr spokesman told DW that dozens more requests were currently being processed, while the military had also responded to many emergencies over the past few days. It is also expecting to get more such emergency calls as Bavaria and Saxony have also seen flooding in recent days.

The latter do not require official requests: "For example, if someone is trapped inside in a car, and only the Bundeswehr can for example push a truck out of the way with a tank," the spokesman said.

"Anything else, such as clearing debris, clearing roads, re-establishing phone lines, setting up sandbags — that must come via an official request," he added. "This is all standard procedure in military-civilian cooperation, which is coordinated from headquarters in Berlin."

Germany has around 180,000 soldiers in its standing army, plus 120,000 military reservists, who are only deployed on a voluntary basis. These reservists are on call in their local area, which means many of the military personnel currently deployed in uniform are more or less serving their neighbors.

Global warming, a weakening jet stream and the moon will combine to cause more devastating heat waves and floods in the coming decades.

Explainer: Why does Germany rely heavily on voluntary fire services?

In Germany, volunteer firefighters perform the bulk of rescue operations, as the recent floods showed. That’s because full-time fire services are expensive to maintain.

Opinion: Germany's know-it-all attitude after the floods helps no one