Coronavirus: How the German military helps fight the pandemic | Germany | News and in-depth reporting from Berlin and beyond | DW | 30.10.2020 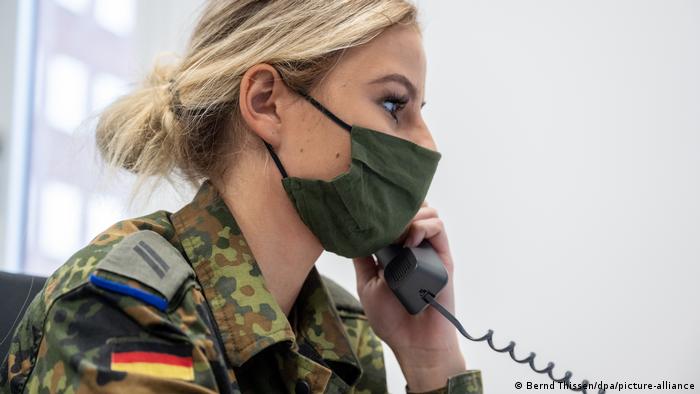 If your city is struggling to find enough people to administer COVID-19 tests, or trace infection chains, or provide emergency medical supplies, you can always call in the army. In fact, there's an application form on the German military website for you to download.

The document is surprisingly short, considering the logistical implications, and Germany's reputation for complex, paper-bound bureaucracy. The PDF spans all of two pages and six questions that set out the parameters succinctly, including: What do you need? What for? Where will the work be carried out? And how long for?

Hundreds of German councils and government departments have taken advantage of the offer so far: As a Defense Ministry spokesman told DW, some 1,300 applications have been filed since the coronavirus pandemic began, of which 900 were approved. Of these, 300 operations are currently being carried out, deploying a total of 3,000 Bundeswehr members. This is well within the Bundeswehr capacity, the spokesman said: Some 15,000 military personnel are available to be called on. 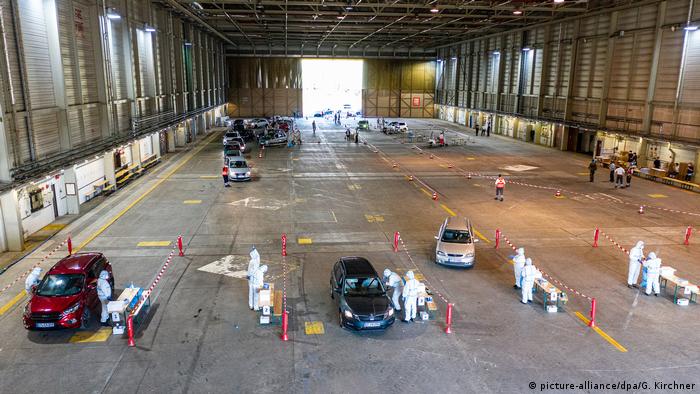 The vast majority of the tasks they take on are administrative, and either only require limited training or training that the soldiers already have: Military medics are providing advice and carrying out COVID tests in airports. Contact tracing, meanwhile, is extremely time-consuming but requires little training.

The cooperation is not frictionless. For one thing, there are hard constitutional boundaries to what the Bundeswehr can and can't do inside the country. In a natural disaster scenario such as a pandemic, the military cannot take over security duties, or even simply help out the police — only an imminent threat to social order would allow that. Some of the requests from local authorities in the past few months have been turned down on those grounds.

Read more: How the German military is fighting coronavirus in their ranks

These restrictions stem from Germany's history and have become part of the country's political culture. Global health crisis notwithstanding, many Germans are sensitive about the military taking over civilian duties: In the Berlin district of Mitte, socialist Left Party councilors objected to soldiers showing up to work in uniform: "The appearance of uniforms in the administration — that's a sight we don't approve of," local Left party chairman Sven Diedrich was quoted as saying in the Berliner Morgenpost newspaper. Berliners, he claimed, would be concerned by the optics. The military complied with the request, and soldiers now wear civilian clothes when they help out in the office.

Holding out without the military

The other issue for authorities is that military deployment is not free — the Bundeswehr charges for soldiers' labor and local authorities have to set aside budgets, just as they would for any service. The Berlin state government alone has paid €2.5 million ($2.9 million) of its coronavirus budget for military help.

This fact has become the crux of a political row that has ensued in another left-wing council in Berlin: Conservative councilors in Friedrichshain-Kreuzberg who demanded requests for military help have found themselves repeatedly outvoted by the Green and Left party majority. This has triggered anger in the right-leaning press and drawing annoyed comments from the German Cabinet.

Health Minister Jens Spahn accused the Berlin districts of making an "ideological" decision at the expense of public health, while Defense Minister Annegret Kramp-Karrenbauer told the Tagesspiegel newspaper in early October: "I lack any understanding when the red-red-green coalition risks rapidly increasing infections ... rather than be helped by the Bundeswehr."

Read more: Where do people get infected with the coronavirus?

Wary of appearing ungrateful, the Friedrichshain-Kreuzberg council countered the criticism by saying that its health authority had simply decided to invest the money in employing more civilian contact-tracers. The council claims this works just as well, if not better, and has the added benefit of employing some of those who have lost work because of the pandemic.

"We never said we want to categorically rule out the Bundeswehr," said Green party councilor Julian Schwarze. "We said the Bundeswehr can be the last option, but up to then we should try to set up the health authorities as well as we can with enough staff."

This was a better plan for a couple of reasons, he told DW: "The Bundeswehr soldiers sometimes only stay a few days, and then get transferred. That means they have to be constantly retrained, and if you retrain in regular intervals, you lose resources."

Another Berlin district, Tempelhof-Schöneberg, made a similar complaint, and so many local districts in the German capital have employed contact tracers on year-long contracts.

But such friction remains the exception, and with coronavirus cases rising in Germany, the Bundeswehr is likely to get plenty more calls for help in the next few months.