Explainer: Why does Germany rely heavily on voluntary fire services? | Germany | News and in-depth reporting from Berlin and beyond | DW | 18.07.2021

Explainer: Why does Germany rely heavily on voluntary fire services?

In Germany, volunteer firefighters perform the bulk of rescue operations, as the recent floods showed. That’s because full-time fire services are expensive to maintain. 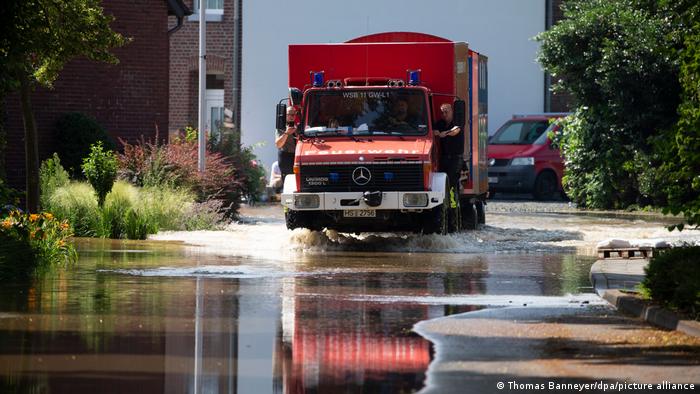 Fire brigades usually carry out rescue and recovery operations, extinguish fires and protect life and property. In much of Germany, however, this work is mainly performed by volunteers who often have a normal, paid job.

The volunteers carry a pager with them at all times that alerts them when there is an emergency. When it beeps, they quickly head to the local fire station and then to the scene of the emergency.

This is because most small towns and villages in Germany cannot afford a full-time fire brigade since equipment and personnel are expensive to buy and maintain. That means full-time professional fire services are often stretched thin in many regions and they can't be relied on to attend to each emergency, especially since they could be far away and need a long time to reach the site.

Volunteer firefighters, however, can often be at the scene of an emergency in just a few minutes. 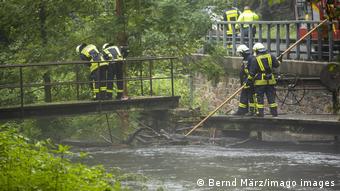 In large cities, that is those with more than around 100,000 inhabitants, there are also professional fire departments. According to statistics from 2018, there are 104 of these in the country. But they too are often supported by volunteers. There are more than 22,000 voluntary fire services in Germany and their ranks are steadily rising.

Being part of a voluntary fire service, however, is not a hobby. Volunteers are required to take courses and participate in extensive and regular training to be able to actively fight fires or get a grip on challenging situations such as a flood disaster. They usually undergo training in their free time.

However, if there aren't enough volunteers to staff a fire brigade, a compulsory fire service is deployed. Residents between the ages of 18 and 50 are required to get trained and temporarily do the work of the fire service.

Another organization that is similar in structure to the voluntary fire service is the German Federal Agency for Technical Relief (THW). It's officially part of Germany's Interior Ministry, but only two percent of its employees are permanent employees. The rest are volunteers.

More than 80,000 people are engaged in 668 local branches of the THW. They work voluntarily to help people in distress, performing important services like providing clean drinking water or clear roads. The work of the THW and the fire services often complement each other.