Rescue operations have continued across the region in western Germany hit by devastating flooding. The crisis has escalated further, as parts of eastern Germany and Austria are now being ravaged by the floodwaters. 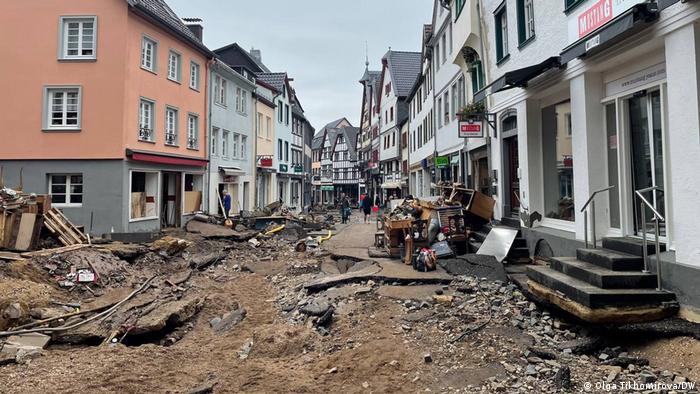 The flooding has destroyed infrastructure and devastated towns across Germany

Emergency workers in western Germany this weekend launched extensive rescue operations, as massive flooding leaves behind a trail of destruction in the region.

So far, at least 150 people have been reported dead in western Germany due to the flooding. This tally includes at least 110 people in the German state of Rhineland-Palatinate and 43 in the neighboring state of North Rhine-Westphalia.

More than 850 soldiers from the German military are assisting with the relief efforts.

DW correspondents were on the ground in the hard-hit areas on Saturday, where they witnessed both the destruction from the flooding and the cleanup efforts taking place.

DW reporter Giulia Saudelli went to the heavily-impacted area of Ahrweiler, where she met with local residents. The locals described to her the horror of seeing their homes and businesses destroyed.

Alexander Petrovski, the owner of a local toy and game store, described how his shop was covered in nearly "one meter of water."

Saudelli said volunteers in Ahrweiler had brought tractors and trucks to clear up the debris from the disaster.

DW's Kate Brady was also in Ahrweiler, where she said "the extent of destruction is devastating." She described how local homeowners watched as floodwaters surrounded their house "from every direction."

DW's Kate Martyr reported Saturday about a tragic scene in the town of Sinzig, where 12 individuals died after being trapped by the floodwaters in a home for people with disabilities.

German President Frank-Walter Steinmeier, along with North Rhine-Westphalia state premier Armin Laschet, visited Erftstadt, a town that was devastated by the flooding.

German president: 'Your fate has broken our hearts'

"We are mourning with those who have lost their friends, acquaintances, their family members — your fate has broken our hearts," Steinmeier said during the visit.

Laschet promised swift aid to the victims of what he called the "disaster of the century."

Laschet was forced to apologize after a video of him laughing during the visit circulated online, angering social media users. Laschet, the chancellor candidate of the center-right Christian Democrats (CDU), hopes to succeed Angela Merkel in the role this fall.

In addition to western Germany, the flooding spread to parts of eastern Germany and Austria on Saturday.

Heavy rainfall has caused flooding in parts of Saxon Switzerand, a popular hilly region for tourists located southeast of Dresden.

The Saxon towns of Neustadt, Sebnitz, Bad Schandau, Reinhardtsdorf-Schöna and Gohrisch have been particularly affected by the flooding. A railway line between Bad Schandau and the Czech town of Decin has been temporarily shut down due to the situation. 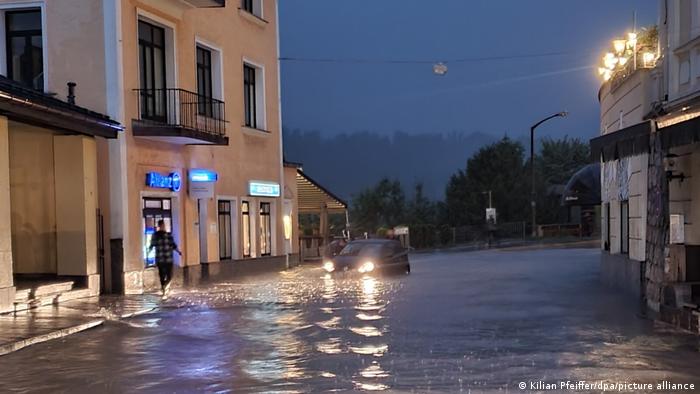 Heavy rains have flooded the streets of Berchtesgaden in southern Germany

Firefighters and other emergency personnel have also rushed to the scene in Upper Bavaria, which is located in the southern German state of Bavaria.

The Upper Bavarian district of Berchtesgadener Land has declared the flooding a disaster situation, amid reports of submerged streets and landslides. At least one person has died due to the floods.

The Austrian city of Hallein is also being heavily impacted by the flooding.

Search and rescue efforts have continued in neighboring Belgium, with at least 103 people having been missing as of Saturday. The country's confirmed death toll from the floods has risen to 27.

The Netherlands' southern province of Limburg was put on high alert from the flooding. Prime Minister Mark Rutte visited Limburg, where he said there is "no doubt" climate change was behind the flooding.

German Chancellor Angela Merkel is expected to visit the flood-ravaged town of Schuld in Rhineland-Palatinate state on Sunday. Her visit to the hard-hit region had been delayed due to her trip to the United States, where she met with President Joe Biden in the White House.

German Finance Minister Olaf Scholz said he is going to push for financial assistance for the flood victims during a meeting with other cabinet members next week, according to the Bild am Sonntag newspaper.

Scholz said an amount "significantly higher" than €300 million ($354 million) in emergency aid should be distributed to flood victims. He also said Germany needs to spend billions to rebuild infrastructure such as roads and bridges that were destroyed by the disaster.