How technology can change the refugee crisis | World | Breaking news and perspectives from around the globe | DW | 31.05.2016

How technology can change the refugee crisis

3D printing of artificial limbs, skyping with a doctor 3,000 kilometers away, or simply reconnecting with the family – for refugees, digital services hold solutions for their pressing needs. 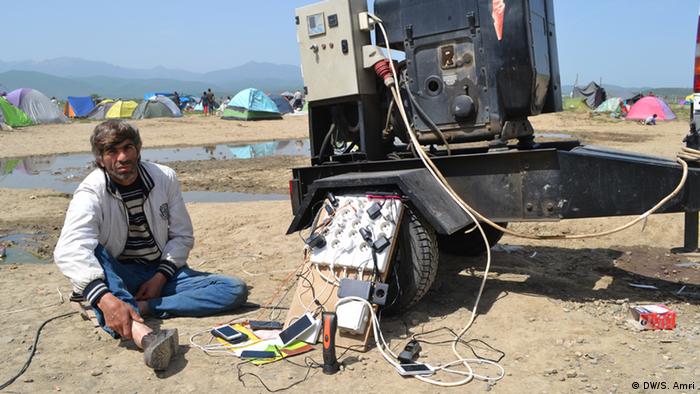 We have all seen the pictures: Refugees who lost everything, but their clothes - and their mobile phones. Often when they get off the boat in Europe the first question is: "Where can I find water?" The second right afterwards: "Where can I find wifi?" Clinging to their mobile phones is crucial for surviving on the journey to Europe: To find the next water source or shelter, communicate with the human trafficker who promises the way out of misery and a path to a better place, to stay in touch with the family left behind and tell them that you are alive and well.

The number of people fleeing war, violence and prosecution is higher today than at any time since the Second World War. Today, there are 250 million migrants worldwide. 60 million refugees have fled their home country or are internally displaced, according to estimates from the World Bank and UNHCR. The actual numbers might well be higher. Most of the migrants carry a mobile phone, at least 60 percent a smart phone with the possibility of access to internet, some studies suggest. 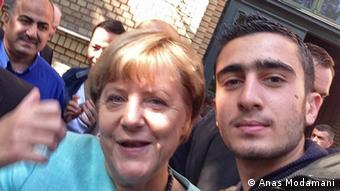 One of the most iconic images of the refugee crisis. Anas Modamani from Syria took a selfie with Chancellor Merkel, Pictures: Anas Modamani

In the efforts to respond to these mass migrations and to help refugees, new actors have emerged, offering digital solutions for pressing needs, like communication, information, education and health.

Some of those actors presented their ideas at the ICT4 Refugee Conference in Berlin – the first of its kind in Europe. "Refugees are important innovators. We have to stop seeing them as a drain on society", said Thomas Silberhorn, a member of the German development ministry that is currently pushing for technological solutions in 280 projects around the world. Silberhorn believes, that the mobile phone can act as a development worker in providing access to information and education. To understand better how refugees are using their mobile phones, his ministry conducted a study in cooperation with betterplace lab, GIZ, Kiron and Open Higher Education.

Among others, the start-up betterplace helped conduct the study on how refugees use their mobile devices

So far, a majority of refugees use their mobile phones mostly as a communication tool, according to the study for which refugees in Jordan, Turkey and Greece were interviewed at the beginning of the year. Facebook and WhatsApp (which refugees simply call "Whats") are among the most used tools. Instant text messages, voice mails and voice notes are widely used functions, in part due to illiteracy or the inability to type in Arabic or Latin letters. Ben Mason, who went to Jordan earlier this year, said: "Our investigation shows that digital assistance for refugees faces obstacles. Developers need to cater to the needs and reality of refugees." Creating a web site or an app that must be downloaded, or requiring an email address would for example keep somebody from using the new digital services. 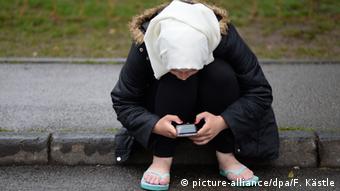 Many need a mobile phone to stay in touch with family left behind and to tell them that they are alive and well, picture: Felix Kästle, dpa

So what is already out there?

Medical care: One idea that could cater to basic needs, is a skype-session with a doctor. Face-to-face care is of course preferred, but if not available, a symptom checking app or an available doctor in a different country might be able to bring first aid.

Communication: The Red Cross already runs a platform called Trace the Face where photos of refugees searching for family members are posted. People can make contact mediated by the platform. NGO's and development workers are already using Facebook and other platforms to communicate with people in need.

Information: Refugeeinfo.eu provides information for refugees on how to register themselves or find provisional accommodation. 8rbtna informs Syrians living in Turkey about the asylum process, current affairs and job opportunites. 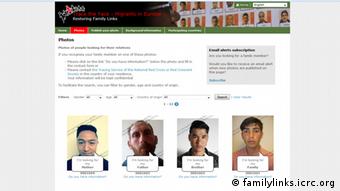 Refugees can search for missing family members on Trace the Face, a web site initiated by the Red Cross, Picture: familylinks.icrc.org

Education: One example is elmedresa.org which teaches Syrian children and teenagers in Turkey in Arabic, based on a Syrian curriculum.

Employment and skill development: 3D Mena provides 3D printers and training. So far 420 refugees have been trained in 3D printing and manufacturing. And it also serves a second purpose: Among other things it produces prosthetic limbs which can be used by those that have been injured in the wars.

Logistics: When the number of refugees arriving in Lesbos reached a peak in autumn of 2015, Marhacar stepped in. With the help of WhatsApp and Google Drive they coordinated the delivery of food, clothing and toiletries for thousands of refugees.

Of course, technology doesn't hold all the answers to the essential needs of migrants, but at least it offers new solutions to old problems. One challenge is that many of these services require access to wifi – a rare good in most refugee camps. To provide internet access to remote areas will be a shared challenge for private companies, like internet providers, governments and start-ups. For the refugee communities, it could be a game changer.

What you need to know about funding a digital media startup 14.11.2020

So you have a great idea for a media startup? How do you plan to fund it? Here's a guide to the dos and don'ts of revenue streams, with useful tips from DW Akademie's Handbook for Digital Media Entrepreneurs.