How Japan′s mask culture may have saved lives during coronavirus | Asia | An in-depth look at news from across the continent | DW | 19.10.2020

How Japan's mask culture may have saved lives during coronavirus

Long before the coronavirus pandemic struck, Japanese people were comfortable with covering their faces — both for medical reasons and to conform with the norms of society. Julian Ryall reports from Tokyo. 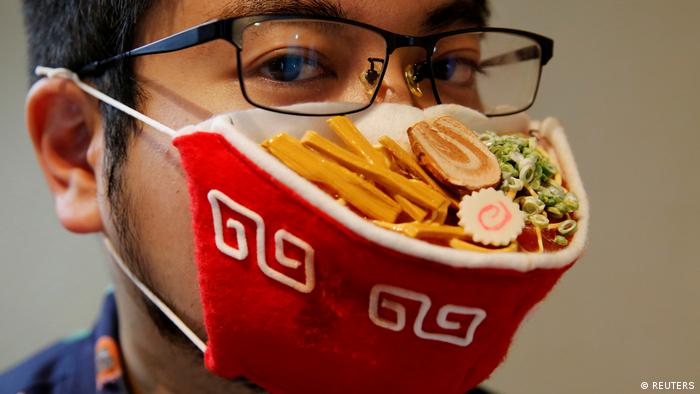 While citizens of other countries around the world struggling with the coronavirus pandemic have railed against face masks as unnecessary, ineffective or an infringement of their civil liberties, Japanese people have in virtual unison done as many experts have suggested and covered up.

Though wearing a mask may not be the only reason why Japan has a relatively low infection and death rate from the disease, epidemiologists say it is almost certainly a positive contributing factor.

The latest numbers from Japanese health authorities show 93,607 confirmed coronavirus cases and 1,676 fatalities in a nation of over 126 million people.

In comparison, the United States has reported 8.2 million cases and more than 220,000 deaths among its population of 328 million.

Japan's figures are relatively low, it has been suggested, because the country has a culture of cleanliness, including washing hands frequently, and people bow in formal situations instead of shaking hands and do not kiss cheeks to greet friends or family.

Similarly, wearing a mask in public is a habit that has been widely practiced for over a century and appears to have its roots in religious festivals.

By the time the Meiji Period dawned in 1868, people were already being depicted in works of art with their mouths covered.

And in the latter decades of the 1800s, as Japan hurried to modernize and catch up with its Western counterparts, concerns about infections meant that more and more people were purchasing cloth masks to protect themselves.

The production and wearing of masks soared in 1918, when Japan was affected by the Spanish flu pandemic, which caused as many as 50 million deaths globally.

Read more: What we can learn from the Spanish flu

The illness is thought to have arrived in Japan in the spring of 1918, brought by sumo wrestlers who were returning from a tournament in Taiwan.

A second outbreak was reported that May, with a sailor on a warship anchored off the port of Yokosuka diagnosed with what was initially called the "epidemic cold."

Records are incomplete, but academics estimated that between 257,000 and 481,000 Japanese died from the Spanish flu. However, a study by US academics published in the journal Emerging Infectious Diseases suggested the real figure may be as many as 2.02 million deaths.

That would account for 3.6% of the population at the time of 56 million, and researchers said it would put Japan's experience on a par with those of other parts of Asia.

Acceptance of face masks has remained since, particularly in the winter flu season and the spring months, when many Japanese suffer from pollen allergies brought on by the swaths of evergreen trees that were planted in the years immediately after World War II to provide timber to rebuild cities.

As a consequence, Japanese did not bat an eyelid when medical experts stated in the early weeks of the pandemic that wearing a mask would at least reduce the risk of contracting the coronavirus.

"The Spanish flu pandemic of 1918 was when people really realized the importance of wearing a mask, and ever since then we have just accepted it as a sensible precaution to take," Yoko Tsukamoto, a professor of infection control at the Health Sciences University of Hokkaido, told DW.

"Face masks have now reached the point where covering one's face is part of our culture and not something that anyone questions," she said.

"Many foreigners who visited Japan before the pandemic believed that people were wearing masks to protect themselves from the people around them," she added.

"That is true to a certain extent, but it was far more out of consideration of the people around them on the train or bus, especially if they had a cold or something similar," she said. "We see it as the considerate, polite thing to do."

Makoto Watanabe, a professor of communications at Hokkaido Bunkyo University, told DW that there is also a high degree of social pressure in play.

"Japanese people are completely used to wearing masks to protect themselves and others, but there is also social convention in effect," he said.

"People know that they should wear a mask and be considerate towards others, so they wear a mask to show the people around them that they are following the rules — even if those rules are unwritten — and that no one can blame them if they get ill," he added.

Watanabe points out that there were a limited number of angry confrontations between passengers on trains and in shops when some people failed to wear a mask in the early days of the pandemic, but such incidents are virtually unheard of now.

"The science on wearing masks fluctuates quite dramatically and some experts put it as low as reducing the likelihood of catching the virus by just 30%, but Japanese people are protecting themselves socially as much as medically," he said.

"As a society, we expect those around us to have the same standards, and right now that means wearing a mask."

Is that a smile, a grimace or a mocking grin? Thanks to the coronavirus, many parts of the worlds are beginning to get used to wearing a protective face mask. Suddenly, we're having to use our eyes more to communicate.

Japan's new emperor, Naruhito, has appeared in public for the first time since ascending the Chrysanthemum Throne. In an address, the monarch wished for world peace and happiness for the Japanese people.