Japan's new emperor, Naruhito, has appeared in public for the first time since ascending the Chrysanthemum Throne. In an address, the monarch wished for world peace and happiness for the Japanese people. 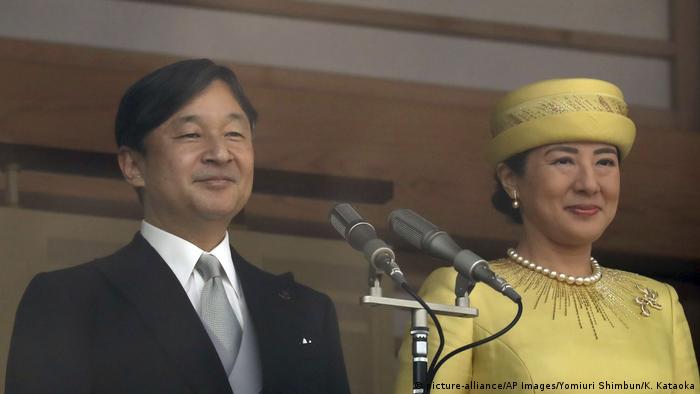 New Japanese Emperor Naruhito made his first public appearance on Saturday, expressing hopes that the country would pursue a policy of promoting world peace.

As he is the first emperor born after World War II, the 59-year-old monarch's accession to the throne is being seen as the start of a new cultural era.

Naruhito took the Chrysanthemum Throne on Wednesday, a day after his 85-year-old father, Akihito, had formally abdicated on the grounds of advancing age.

"I wish for your health and happiness and sincerely hope that our country pursues world peace hand in hand with other countries and will develop further," Naruhito told flag-waving well-wishers from a palace balcony, standing alongside his wife, Empress Masako.

The new monarch, who studied history at England's Oxford University and plays the viola as a keen amateur musician, promised to abide by the postwar constitution, which strips emperors of political power.

Start of an era

He pledged to fulfill his responsibility as a national symbol while "always turning my thoughts to the people and standing with them."

An estimated 65,000 people were reportedly present to celebrate.

Naruhito is Japan's 126th emperor and his accession marks the beginning of the "Reiwa" era — Reiwa meaning "beautiful harmony."

The emperor served his role longer than he had planned. His abdication is the end of an era — and not just in Japan. A man of few words, Akihito set out an important course all the same, writes Alexander Freund. (30.04.2019)

As Japan prepares for the emperor's abdication ceremonies, his grandson Prince Hisahito has become the center of a security breach. A knife was placed on the 12-year-old's school desk. (27.04.2019)