Japanese people cheered new Emperor Naruhito as he drove through the streets of Tokyo on Wednesday, heading to the country's royal palace to formally claim the symbols of royal power.

Naruhito then accepted the royal regalia, including a sacred sword and a jewel, at a brief and simple ceremony. His father officially gave up the objects a day before. The sword and the jewel, alongside an ancient mirror, make up the Three Sacred Treasures of Japan with links to Japanese mythology. 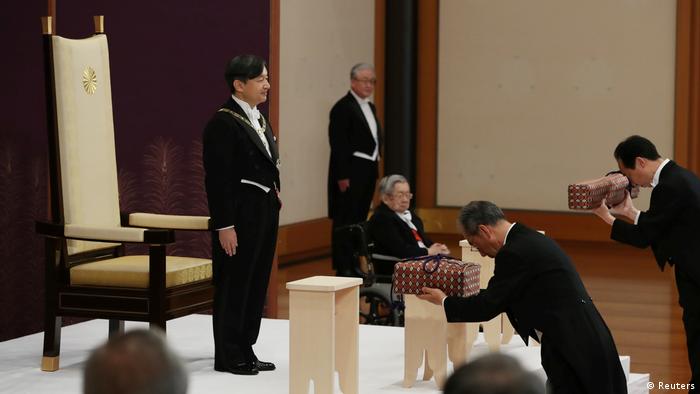 On Wednesday, the Oxford-educated Naruhito said he would "reflect deeply" on the path taken by his father and other emperors.

"I pledge that I will always think of the people, and while drawing close to them, fulfil my duties as a symbol of the Japanese state and the unity of the Japanese people in accordance with the constitution," the 59-year-old said in a speech after the ceremony.

"I sincerely hope for the happiness of the people and further progress of the country, and for world peace," he added.

Prime Minister Shinzo Abe congratulated Naruhito and pledged to create a "bright future" during his reign.

Female members of the royal family did not attend the handover in accordance to tradition. However, the custom only applies to women of royal blood, which allowed a female cabinet minister to witness Wednesday's ritual. 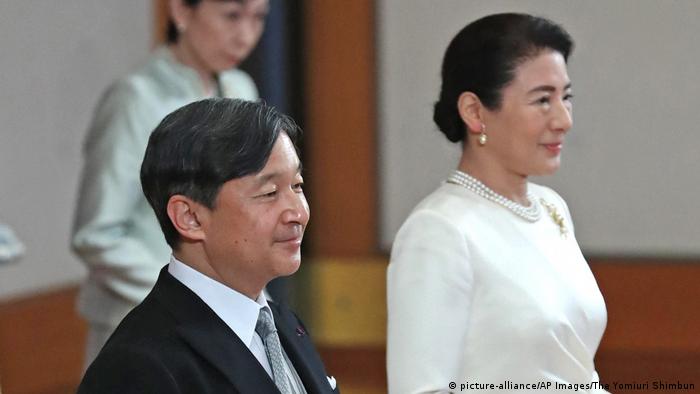 Naruhito's wife, Empress Masako, and their 17-year-old daughter Aiko joined the new monarch after the ceremony was done. The 55-year-old empress is a former diplomat who has struggled with stress since entering the spotlight as a member of the royal family. Masako also faced public pressure for the lack of male children that could inherit the throne after Naruhito. Japan's Imperial Law does not allow for female heirs, leaving Aiko out of the running.

Naruhito's younger brother Fumihito is now second in line for the throne, which is then likely to pass on to Fumihito's now 12-year-old son Hisahito.

Pomp and ceremony still to come

While the handover ceremony was held on Wednesday morning, Naruhito legally became the nation's 126th emperor at midnight, following his father's abdication. Midnight also marked the beginning of Naruhito's imperial era of Reiwe, or "beautiful harmony." 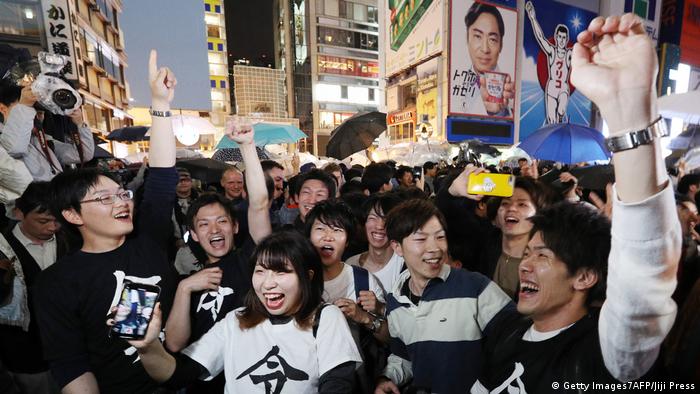 The Japanese marked the change on the throne with midnight celebrations across the country. Others flocked to the royal palace on Wednesday morning, or gathered around Tokyo's Meiji Shrine where Shinto priests conducted a special ceremony. Authorities handed out free sake and organized a display of horseback archery around the shrine. Many couples also decide to get married on the first day of the Reiwe era.

A much bigger celebration is planned for October this year, with Naruhito and Masako scheduled to parade through the streets of Tokyo and accept congratulations from world leaders and fellow royals.