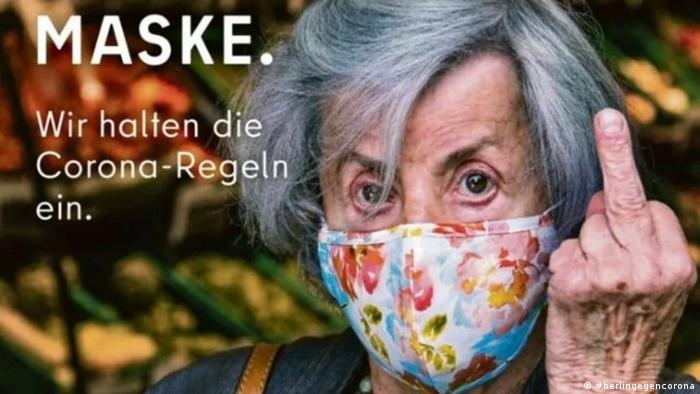 The German capital's tourism authority has withdrawn a controversial advertisement in which an elderly lady gives the middle finger to individuals who do not wear masks.

Visit Berlin and the Berlin Senate on Tuesday launched the advert, entitled "We obey the corona rules," aiming to prevent further spread of the coronavirus and to highlight the importance of safeguarding the health of the elderly.

Above the image of the woman wearing a floral-patterned mask and giving onlookers the finger. The poster reads: "A finger-wag for all those without a mask."

However, the advert immediately drew criticism on social media, with some calling it insulting, and it was subsequently pulled.

"There could have been more fortunate ways to draw attention to the urgency" of the situation, Müller said, referring to a spike in the number of new infections in the city.

Berlin senate member Marcel Luthe said he had made a formal complaint to the police about the advert, saying it incited hatred against people who cannot wear masks such as young children or people who suffer from health complications.

Visit Berlin spokesman Christian Tänzler said the ad had sought to play on Berlin's unique, dry sense of humor and its identity as an outlier among German cities.

"It is a provocative image," Taenzler said, adding that the campaign would continue but that the image would be dropped.

"The enforcement of corona regulations somehow didn't really work out in Berlin," he wrote on Twitter. "So the Senate tried to insult the public."