How can the EU survive without Russian coal? | Business | Economy and finance news from a German perspective | DW | 06.04.2022

How can the EU survive without Russian coal?

Almost 70% of the European Union's imports of thermal coal, which is used to generate electricity, come from Russia. Germany and Poland are particularly vulnerable to an EU embargo on Russian coal. 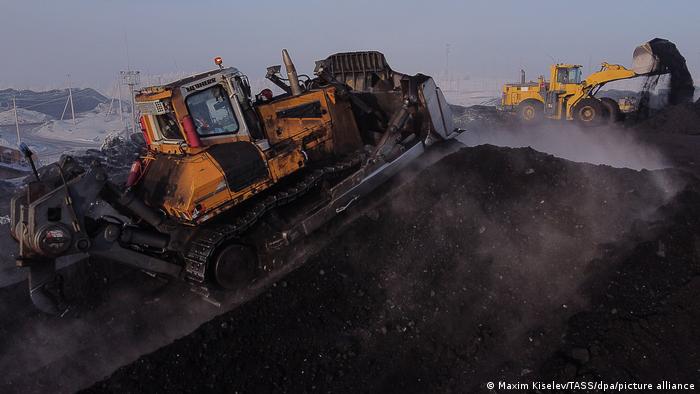 The European Commission has proposed that it would ban buying Russian coal as part of new sanctions on Moscow in response to apparent war crimes by Russian forces in the Ukrainian town of Bucha. The EU imports nearly €4 billion ($4.4 billion) worth of coal from Russia a year.

An embargo on coal from Russia, the EU's biggest coal supplier accounting for about 45% of total imports, could inflict further pain on the 27-member bloc already reeling from severe energy shortages and high oil and gas prices.

Several EU countries have been importing more coal from Russia in recent months as they seek ways to bring down power generation costs following an unprecedented rise in gas prices. Coal, the dirtiest fossil fuel, is much cheaper for power generation.

How reliant is the EU on Russia for coal?

With EU countries drastically cutting down their production and consumption of highly polluting coal over the past two decades to fight climate change, their reliance on imported coal, especially from Russia, has increased significantly.

Russia, the world's third-largest coal exporter behind Indonesia and Australia, accounts for 45% of total EU coal imports. When it comes to thermal coal, which is used to generate electricity and heat, that figure stands at 70%, according to Brussels-based think tank Bruegel. Russian metallurgical coal, used to make iron and steel, makes up about 20%-30% of the EU's coal imports.

Russia's share of the EU's imports of hard coal, an aggregate of anthracite and bituminous coal which has the highest carbon content, increased to more than half in 2020 from less than 10% in 1990.

Germany, Poland, Italy and the Netherlands are among those most reliant on Russian coal, which accounts for more than 65% of total imports in each of those countries.

How quickly can the EU wean itself off Russian coal?

The German association of coal importers (VdKi) has said hard coal imports from Russia to Germany can be substituted in a matter of months. It named the US, Colombia, South Africa and Australia among the countries most likely to fill the gap.

"There is a well-functioning world market. There are sufficient quantities available," Alexander Bethe, chairman of the board of VdKi said in a statement. "Germany imported about 18 million tons of hard coal from Russia last year. That is only about 2% of the total world trade."

Shunning Russian coal would be much easier and cheaper than replacing Russian natural gas as unlike gas, coal doesn't need to be liquified for transportation or doesn't require an extensive network of pipelines.

"It was only Russia's aggressive push in the past decade for market share in the EU that pushed out other suppliers," analysts at Bruegel wrote in a blog. "In principle, shipments from countries that have reduced exports to the EU are still largely available to substitute for Russian coal."

The analysts also suggested that the shortfall could be bridged by boosting domestic production in the event of an emergency. They called on policymakers to assess whether a temporary relaxation of environmental rules would be needed to allow the use of more easily available coal types.

Rystad Energy analysts, however, have said coal consumers "will struggle to source additional coal from alternative producers because the supply-demand balance of the international seaborne thermal coal is extremely tight."

How would the coal embargo impact the EU economy?

Increased demand from the EU will further drive up global coal prices, which would mean even higher energy bills for households and companies. This could push up inflation which is already at its highest level since the bloc's inception. Energy shortages could worsen next winter when demand for heating rises.

Despite efforts to curb the use of coal to generate electricity, the highly polluting fossil fuel continues to account for around 15% of Europe's electricity mix.

"Higher coal demand, lower coal supply and more complex logistics will increase the cost of coal imports and might lead to temporary local disruptions," Bruegel analysts said. "However, stopping imports of Russian coal would appear not to cause dramatic supply disruptions on aggregate."

Where does Germany stand on phasing out Russian coal?

Germany has backed a ban on Russian coal, with Economy Minister Robert Habeck saying the country would become independent of coal from Russia by autumn this year.

Berlin, which is trying to swiftly rid itself of Russian energy, has been reluctant to sanction Russian fossil fuels, warning that such a move could have a severe impact on its people and economy.

As atrocities carried out by Russian forces in Ukraine come to the fore, Germany seems to be more willing to hurt Russian fossil fuel exports, the country's biggest source of revenue, despite the economic costs.

German Foreign Minister Annalena Baerbock said on Tuesday the EU was working on a plan to completely cut ties with Russian fossil fuels, starting with coal.