Hundreds of Hong Kong protesters carried the UK flag aloft and sang "God Save the Queen" in front of the British Consulate on Sunday, demanding that the former colonial power put pressure on China. Demonstrators also held banners reading "One country, two systems is dead" and "UK save Hong Kong."

Elsewhere in the city, thousands of protesters defied a police ban to march through the streets.The march reportedly disrupted traffic and weekend shopping at the popular Causeway Bay shopping belt.

Police responded with tear gas and water cannon trucks with water dyed blue in order to later identify protesters. The clashes ended a relative lull in the intensity of skirmishes between police and protesters. Demonstrations have taken place regularly since June.

Read more:  Hong Kong crisis — What you need to know 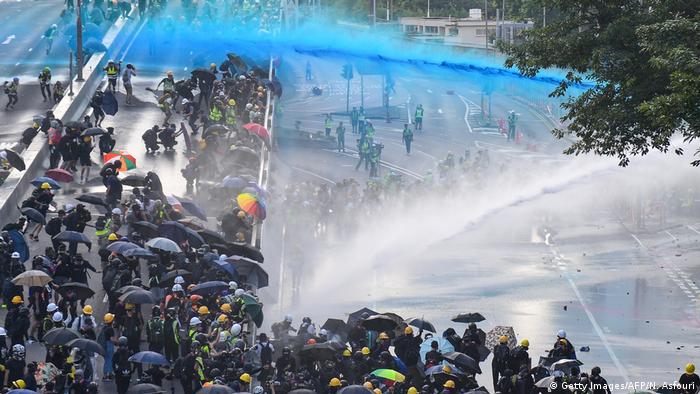 The protest movement started against an extradition bill that would have allowed Hong Kongers to be sent to mainland China for trial, despite the city having its own independent judiciary.

But the protests have moved beyond opposition to the extradition bill, morphing into a mass demonstration against the Hong Kong government and Beijing.

Pro-democracy protesters are demanding universal suffrage and police accountability after a number of violent incidents during demonstrations.

The momentum behind the protests represents a major challenge to China, which says it is committed to "one country, two systems," denies meddling and views Hong Kong as an internal affair.

Britain handed Hong Kong over to China in 1997 under a "one country, two systems" agreement that ensures freedoms not granted on the mainland until 2047.

Beijing has accused Britain and the United States of being behind the unrest. Britain says it is a legal party to the agreement that transferred Hong Kong to China and would defend residents' interests.

However, it is unclear what action Britain can take, with its own government in crisis back home over chaotic Brexit plans and London looking for trade and investment cooperation with China as it prepares to leave the European Union.

To the point - The Long March: China’s Path to Global Supremacy?

Campaigner Joshua Wong has used his trip to Germany to call for an end to police brutality and a broadening of democratic rights in Hong Kong. Talking to DW, he outlined his solution to the ongoing protests. (10.09.2019)

Hong Kong protesters form a 'Baltic chain' across the city

Activists in Hong Kong have locked hands across the city, echoing protests in the USSR three decades ago. Meanwhile, a Chinese daily reported a detained UK consulate official had been "soliciting prostitutes." (23.08.2019)

A Hong Kong police officer has fired his weapon to disperse angry demonstrators chasing him with rods. Police confirmed that 36 people were arrested after peaceful protest turned violent. (25.08.2019)