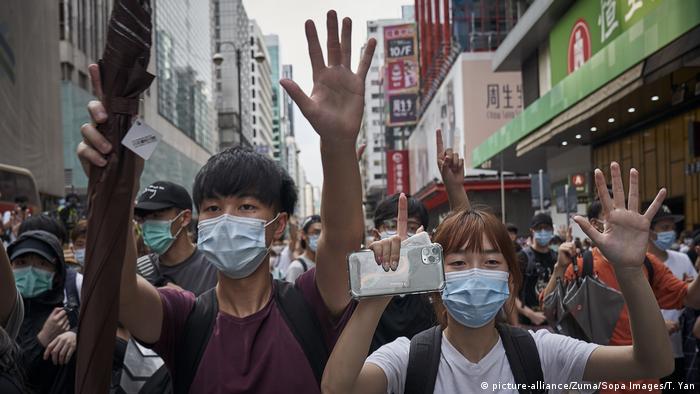 German Foreign Minister Heiko Maas on Thursday criticized China's plan to impose a new security law in Hong Kong, saying that "freedom of expression and assembly" and democratic debate "must continue to be respected in the future."

In a statement, Maas said, "We are agreed in the EU: Hong Kong's high degree of autonomy must not be hollowed out … Citizens of Hong Kong enjoy freedoms and rights that are granted to them by the Basic Law and the 'one country, two systems' principle. We expect these legal principles to be upheld."

"The 'one country, two systems' principle and the rule of law are ultimately the basis for Hong Kong's stability and prosperity. Not even the security law can be permitted to call these fundamental values into question. Freedom of opinion and of assembly, and also the democratic debate in Hong Kong, must also be respected in future," Mass said.

Read more:  Hong Kong is being 'robbed of its rights'

Of China's Communist Party delegates, 2,878 in favor of the new law and one against. Six abstained.

The vote empowered the standing committee to draft legislation to punish "secession, subversion of state power, terrorism and acts that endanger national security in Hong Kong."

Opponents view the new proposed law as a further threat to the special status of the semi-autonomous Chinese territory.

Read more:  Many Hong Kong residents leave, if they can

In a joint statement, the US, UK, Canada and Australia said Beijing's new security law on Hong Kong put China it in direct violation of its international commitments.

Top diplomats from the four countries said they felt "deep concern" that such a law "would curtail the Hong Kong people's liberties, and in doing so, dramatically erode Hong Kong's autonomy and the system that made it so prosperous."

Their statement added: "The world's focus on a global pandemic requires enhanced trust in governments and international cooperation. Beijing's unprecedented move risks having the opposite effect."

Appearing in a video conference before the Security Council to discuss cooperation between the EU and the United Nations, EU chief Josep Borrell expressed his concern about "the steps taken by China." In an echo of other countries, he added that the EU believed the draft law failed to comply with China's international commitments.

UK looks to welcome Hong Kongers up to a year

UK Foreign Secretary Dominic Raab told reporters that the UK would change its rules around the rights of "British National Overseas" (BNO) passport holders if Beijing went ahead with the bill.

BNO holders can currently enter the UK without a visa and remain for up to six months, but they don't have the right to reside in the UK.

Raab said that could be altered to allow for extendable periods of 12 months, adding "that would itself provide a pathway to future citizenship."

Hong Kong  — a British colony for over 150 years  — gave Hong Kongers the special BNO status before it handed the territory back to China in 1997. At the time, it was seen as a compromise struck with Beijing intentionally falling short of providing the automatic right to permanent residence in the UK afforded to many members of the former British Empire.

"If China continues down this path and implements this national security legislation we will change that status, and we will remove that six month limit," Raab said.

The Day with Brent Goff: The Hong Kong Factor

HK leader Carrie Lam says that Beijing's proposed legislation will not affect the city's judicial independence. Critics warn it could further erode the basic and fundamental freedom of the autonomous Chinese territory. (22.05.2020)