A Hong Kong court has ordered 47 pro-democracy activists to be held behind bars as they await trial in late May. Though 15 were initially granted bail in a marathon arraignment hearing, that decision is now under review. 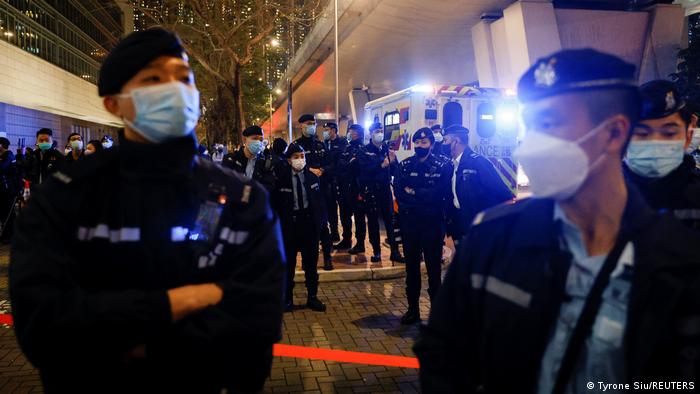 A Hong Kong court on Thursday ordered 47 dissidents held on subversion charges under a Beijing-imposed national security law not be released on bail before a May 31 court hearing.

Fifteen of the people charged were initially granted bail but have now been ordered to return to custody to await the decision of a 48-hour review prompted by a Department of Justice appeal. Thirty-one activists were denied bail outright.

The defendants, 47 in all, were among 55 pro-democracy activists arrested in January under Hong Kong's new national security law.

The law, which was foisted upon semiautonomous Hong Kong by Beijing, criminalizes secession, subversion and collusion with foreign forces to interfere with local affairs. The most serious charges carry a penalty of life in prison. Eight of the people arrested in January were not charged.

Most Hong Kong pro-democracy activists jailed or in exile

The dissidents were detained Sunday in the biggest single-day roundup of opposition activists since the security law was enacted in June. They stand accused of subversion for their roles in planning an unofficial July 2020 primary vote for Hong Kong government elections.

The government alleges that the activists sought to use the poll to field pro-democracy candidates with the best chances of being elected to Hong Kong's government in a September vote — which was eventually postponed — with the intention of blocking legislation, paralyzing the Legislative Council and forcing the resignation of Chief Executive Carrie Lam.

Sunday's arrests were significant in that most all of Hong Kong's prominent pro-democracy activists are now behind bars or in self-exile. Beijing has continued to crack down on dissent — ignoring international outcry and the desires of Hong Kong residents who were promised "one country, two systems" when the semi-autonomous city was returned to China by the United Kingdom in 1997.

In a statement, Chief Magistrate Victor So said of the activists initially granted bail that "these 15 defendants, the court finds it has sufficient ground to believe that you won't commit acts endangering national security again during the period of bail."

Speaking of the 32 denied bail, So said: "The court does not find it has sufficient ground to believe that you will not continue to commit acts that endanger national security."

Among the defendants denied bail were Benny Tai, co-founder of the 2014 Occupy Central movement, who removed his bail application after he was detained in a separate case, and Joshua Wong, who is currently serving a 13.5-month sentence on protest charges.

Hundreds of pro-democracy supporters descended upon the West Kowloon Magistrates' Court to show solidarity with the people arrested, singing and shouting protest songs and slogans outlawed by Beijing for their secessionist content. Soon thereafter, police hoisted a warning flag to alert the people present that they may be violating the national security law.

The new law removes the automatic path to bail, allowing it to be granted only in cases in which it is believed that defendants "will not continue to commit acts endangering national security."

Lev Nachman, a visiting scholar at National Taiwan University in Taipei whose research focuses on social movements and politics in Hong Kong, told DW: "The marathon-style hearing for the 47 pro-democracy figures just seems like the government is trying to escalate what the national security law can do."

He said the Justice Department's appeal against the decision to grant bail to 15 of the 47 defendants "sets the tone for how aggressive the Hong Kong government is going to be about stamping out any sort of opposition voice that they can."