Will UK Hong Kong immigration program trigger an exodus? | Asia | An in-depth look at news from across the continent | DW | 02.02.2021

Millions of Hong Kong residents are eligible for a fast-track UK citizenship program. Two young emigrants told DW that escaping the long arm of Beijing is worth the struggle of starting over in a foreign country. 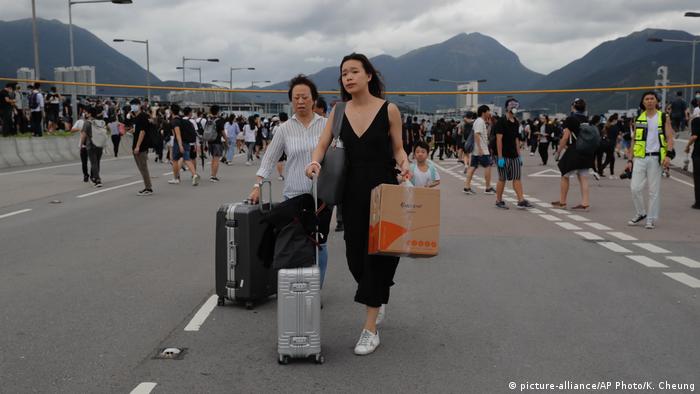 On January 31, the United Kingdom kicked off an immigration program that will ease UK citizenship requirements for millions of Hong Kong citizens who want to leave the territory in the wake of continued pressure from Beijing on civil liberties.

The UK Home Office estimates there are 2.9 million British National Overseas (BNO) status holders eligible to move to the UK, with a further estimated 2.3 million eligible dependents. Under the new scheme, these people will be able to apply online for a visa. BNO arrivals from Hong Kong are allowed to live, work and study in the UK as long as they can financially support themselves.

After five years in the UK, they will be able to apply for citizenship. BNO status is a legacy of British colonial rule specifically granted to Hong Kong residents born before the territory was handed back to China in 1997.

The UK government forecasts the new visa could attract more than 300,000 people and their dependents over the next five years. Many Hong Kong residents are already welcoming the chance to leave.

A new life far away from home

Sun, a 29-year-old civil engineer, arrived in the UK last December on a BNO passport, deciding he wanted to get in ahead of the visa program's start date.

Sun felt insecure after the Umbrella Movement in 2014 and renewed his BNO passport. The massive anti-government protests in 2019, and the ensuing crackdown from Hong Kong's Beijing-backed leadership, he says, were the last straw, prompting his decision to leave as soon as possible.

"The Hong Kong government's terrible handling of the political crisis made Hong Kong no different from mainland China," he told DW, adding, Hong Kong's leadership "is no longer serving the people of Hong Kong and even threatens our way of life."

The UK said the decision to open its doors to Hong Kongers was fulfilling a "historical and moral commitment" to the people of the former colony.

In June 2020, Beijing imposed a national security law on Hong Kong, which was criticized around the world as an authoritarian tool to quash dissent and erode civil liberties. Since then, dozens of pro-democracy activists have been arrested.

Wong, a 30-year-old civil servant in Hong Kong, decided to move to the UK after city authorities ordered all civil servants to sign a declaration of loyalty.

"We didn't want to sign it as it required us to pledge unconditional loyalty to authorities. No dissent is allowed even when we're off duty. That is an infringement of personal rights," Wong told DW.

"I feel ashamed to work for a government with which I have disagreed with since the 2019 protests. I'm even more worried that pledging allegiance to it would complicate my citizenship application in other democratic countries."

The UK estimates that that the 300,000 people expected to arrive over the next five years could bring a net economic benefit of up to £2.9 billion ($4 billion / €3.3 billion) to the UK.

Wong and his family say they will depart once they sell their property in Hong Kong. He said giving up a well-paid job with a monthly salary of $15,000 is less important than securing a future for his newborn daughter.

"The national security law in 2020 was a critical turning point. It signaled the death of 'one country two systems.' There's no hope for democracy and freedom anymore," Wong said.

"Hong Kong has lost the protection of its constitution. I cannot let my child grow up in a brainwashed environment that only instills one set of values controlled by China," he added.

Although Wong has no access to social welfare benefits in the UK, his daughter will be eligible for enrolling in public school.

A path of no return?

Beijing has pushed back against the migration scheme and will no longer recognize BNO passports as valid identification.

As Beijing considers further response measures, Sun and Wong told DW that rumors of Beijing cracking down further on BNO passport-holders by removing voting rights will likely fuel an exodus, rather than be a deterrent.

"It would have been a dilemma a few years ago but not now. It's meaningless to retain my electoral rights when fair elections have been wiped out," Sun said.

However, for most people, starting a new life far away from home is a path of no return.

"We, the emigrants, are the lucky ones compared to those who can't leave," Sun said. "Even though Hong Kong people are in a diaspora, I hope our hearts are still united just as they were on the streets in 2019."